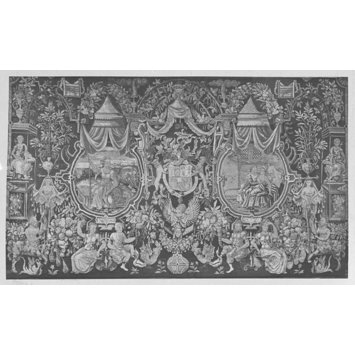 Tapestry woven with coloured wools and silks on linen warps. The coat of arms of the Herbert family is located in the centre. The shield contains the following quarterings (familes are shown in brackets):

The shield is within a garter scroll, and is surmounted by a closed helmet with foliated mantling. Its supporters are (right) a leopard; and (left) lion rampant, both gorged. Above is the motto, and below is the half-figure of a an angel with wings outspread and fingers pointing upwards: from his waist is suspended a draped mask, which rests against the middle of a curved piece of strapwork, hung with a bay wreath. Tied by a ribbon to the latter is a disc-like ornament geometrically marked. To the right and left of this is the badge of the Earl: a wyvern with a hand in its jaws. On each side of the badge are seated a man holding a cornucopia (symbolising Plenty?) and a woman (symbolising Peace?), half-turned away from each other. At the top of the tapestry a 'bascule' with a crescent, which is also a badge of the Earl, is placed toward the right and left corners.

The coat of arms is surmounted by a draped canopy under an arched trellis intertwined with foliage and pods of peas. It is flanked on each side with a large medallion, outlined by strapwork, under a draped canopy. Within the medallion on the right are represented a lady and a gentleman seated on a couch (representing Luxury?), and within the left medallion a lady in Classical costume is seated in a landscape, holding what appears to be a spear in one hand, with the other hand resting on the neck of a cock (representing Pride?). Under each medallion is a cartouche, one containing the letter W and the other the letter H (possibly for William Herbert?). The medallions are overhung by arches of flowers and fruit; they are flanked, on the outer sides, by vases filled with tall, leafy stems under arched trellises, and resting on the heads of female terminal figures. Beyond these, at each end, is a seated woman with cross and book (symbolising Faith?), under a square canopy which supports a vase of flowers. In each of the lower corners is a centaur, half-human and half-quadruped, blowing a horn and holding a fish.

Wool and silk, woven over linen

1548-1601, Southern Netherlands; Grotesque with the Arms of Herbert 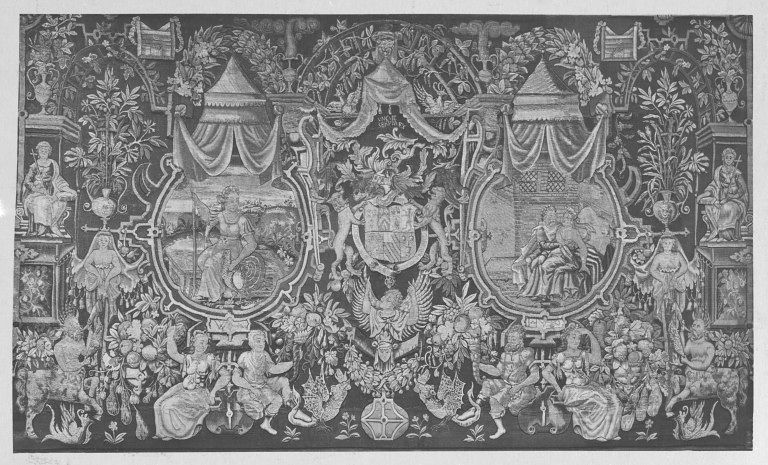