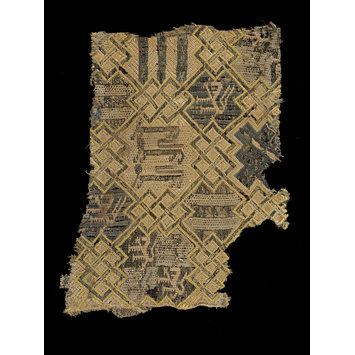 This fragment of silk probably originated in Spain, the first country in Europe to develop silk production. It has a woven pattern comprising heraldic devices. Most prominent are two sets of lions, the first couchant (lying lengthwise), the second rampant (standing on their hind legs). Rampant lions were the symbol of the province of Spain called León (which translates into English as lion).

The Arabs introduced sericulture (the production of the raw material) and silk-weaving to Spain. Sericulture was established by the 9th century in Al Andalus (Andalusia today). By the 10th century, the production of silk worms had become significant. Silk-weaving developed in particular in Almeria, Cordoba, Granada, Malaga, Lorca and Murcia. The silks made there were desirable luxury products worn by royalty in the northern Christian provinces. A few garments of such silks survive because their owners followed the custom of being dressed in finery for their burial (e.g. in the Monastery of Las Huelgas, Burgos).

Small fragment of silk. Elaborate polychromatic geometric interlace pattern made up from compound weave. The design is woven in silks of deep blue, black, yellow, and red (faded to salmon pink); and metal threads. The tessellating pattern includes cross-shaped tiles and polygonal tiles, each with a different pattern, including blue and black stripes, solid red, and red stripes of alternating twill separated by narrower blue-and-black stripes. These are potentially heraldic devices, as there are extremely stylised lions woven into several of the tiles. Three long-bodied lions are ranged on the red tile, and another tile is quartered, with a stylised rampant lion in each quarter. The tiles are separated with intertwining and criss-crossing geometric interlacing in yellow and golden metal threads. The full repeat of the design is not discernible due to the broad variety of background patterns in the lozenges and polygons.

Acquired in 1863 as part of the collection of Dr. Franz Bock.

Originally accessioned as a 13th century Oriental silk damask in 1863 on its acquisition from Dr. Boc, probably because the motif was mistaken for Islamic script; 20 years later, in 1883, Dr Bock wrote a revise in which this was re-assessed as a 14th century Italian silk. The fabric has since been re-attributed to Spanish manufacture.

In December 2006, Mariam Rosser-Owen, a curator in the Middle-Eastern section of the Asian Department, examined this textile to determine whether the devices in the patterns were indeed Islamic calligraphic devices as had been supposed. She subsequently pointed out that viewing the fabric from certain angles had led to the misinterpretation of it having "calligraphic devices". In fact the design is of stylised heraldic lions.

The elaborate geometric interlace design features a variety of background patterns behind the heraldic lions. These designs are heraldic type patterns, with one tile being quartered (with a lion rampant in each quarter), another comprising "barry" (or horizontal) stripes behind a single rampant lion, and a third tile having a "paly" (vertical stripes) design in blue-and-black and red. The central tile in the fragment is a plain red ground with three lions couchant (stretched out, head raised).

The heraldic design of the fabric indicates that it was probably intended for ceremonial use, probably for a specific individual or persons/textile objects associated with it. Very similar use of heraldic imagery as part of an overall textile patterm can be seen in 859-1899, and also in the grave clothing of Fernando de la Cerda (d.1275), which includes a mantle, pellote, and tunic woven with an all-over repeating pattern of shields with castles and lions rampant - the arms of Castile and Leon.The latter are preserved at Las Huelgas Monastery in Burgos. It seems likely that this textile, too, was probably used in Christian Spain.

In March 2007, a strong similarity between this fabric and that upon a relic pouch from the Liebfrauenkirche of Valeria in Sion was noted. The Sion pouch is described as being "embroidered in gold, silver, and silk thread" on a linen ground, the quote demonstrating the confusion as to whether such fabrics are embroidered or woven. The design of the pouch is "adorned with a lozenge decor in which three golden leopards alternate with three red lilies.". In this sense, the design of the Sion pouch textile is slightly less elaborate than the various heraldic tiles on our fragment, which is also in rather better overall condition. The Sion pouch was conserved in 1973 at the Abegg-Stiftung in Riggisberg. (Fleury-Lemberg, pp.270-271)

Originally accessioned in 1863 as Oriental, 20 years later reattributed to Itally, currently recorded as a Spanish textile. 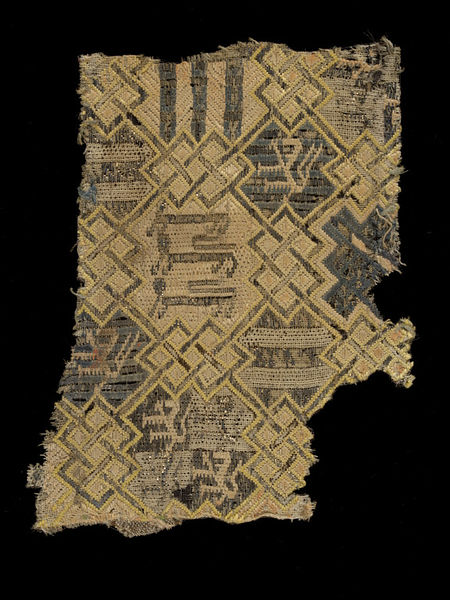