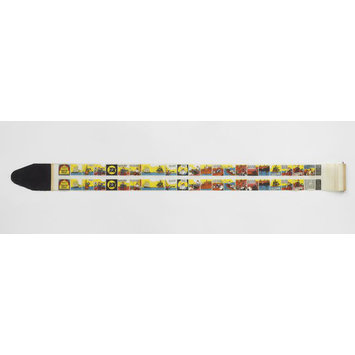 1. projector; burnished metal; brown; with a dual lens which can be adjusted for focus. On each side of the lens are the spindles for housing the films; the left one takes the film reel and the right one is permanent. The right one is also the controlled movement operated by the turning wheel on the right side of the body of the projector. In the body is an electric light; operated by wire protruding from the back which have a bayonet type plug. The back of the body can be removed to replace the light itself. On the left side of the body is the maker's label. To the centre of the turning wheel can be attached the sound mechanism by a screw (both screw and thread are rusty). When the black wooden handle turns the wheel sound is produced as well as the movement. Although complete and in fairy good condition; the steel parts are rusty.

2. sound mechanism; domed shaped amplifier of matching metal with the support bracket underneath to attach it to the projector. The needle case is attached to the amplifier and the balance wheel to the bracket. It is not possible to screw the bracket to the projector because both the screw and the thread have rusted.

3. record plate; matching metal disc which fits into a hole in the bracket. The edge on which the record is place is softened by a strip of brown braid.

5. gramophone record; black plastic with a red; blue and white label on both side showing the title; maker's name and an illustration of people watching a stage. 'DURABLE TOYS PRESENTS DUROTONE / DUROTONE RECORDS SYNCHROMIZED WITH DURACOLOR FILMS / SET NO. 130 RECORD NO. R-131-B / FEATURING ALICE IN WONDERLAND (on one side and) PUNCH AND JUDY.'

6,7. film strip in its card box; 'ALICE IN WONDERLAND SET NO 130 FILM NO F132 FAIRYLAND TALES/DURACOLOR ANIMATED FILM'. Strip shows two drawings in colour of each picture; done of thin paper and wound around a wooden reel. The outer end is a wedge of black cloth. The box (7) is card printed in blue; red and white to show the title; maker's name and other details.

8,9. film strip in its card box; 'PUNCH AND JUDY SET NO 130 FILM NO F131 FAIRYLAND TALES/DURACOLOR ANIMATED FILM. It is the same as above with the exception that the words DIRECTED BY TED SHBAUGH STUDIOS have been added to the title of the strip itself.

12,13. film strip in its card box; 'POPEYE IN DESERT ISLE SET NO 50 FILM NO F54 FAIRYLAND TALES/DURACOLOR ANIMATED FILM'. It is the same as film (8) with the studio name added. The end of the film is badly torn.

14. original box for use with the sound mechanism; corrugated card printed on the side in black 'FOR USE WITH UNCLE SAM'S MOVIE PROJECTOR MADE IN USA and ONE NO. 405 DURATONE SOUND SYSTEM/DURABLE TOY & NOVELTY CORP. 200 FIFTH AVENUE; NEW YORK CITY.' 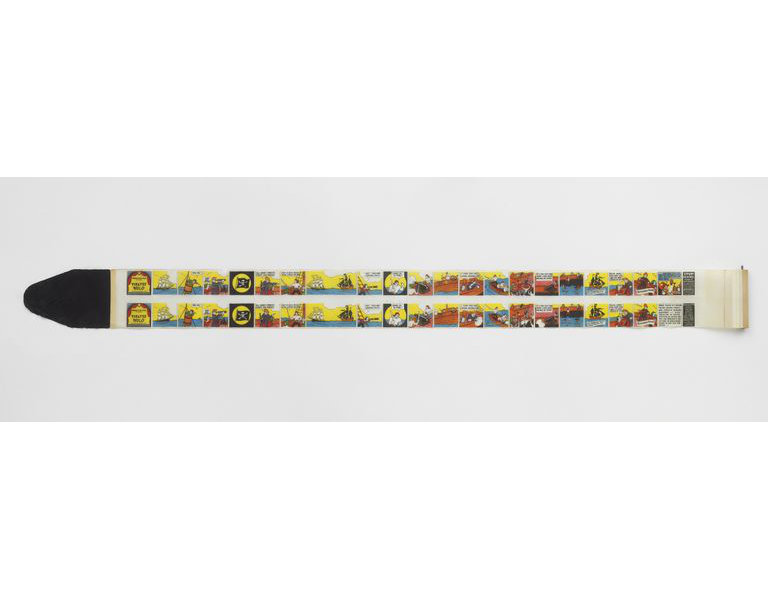