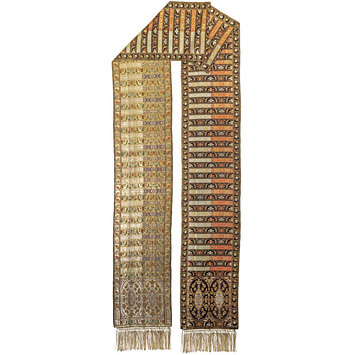 The Polish sash was developed as a significant feature of national dress for Polish men during the 17th and 18th centuries. It came to signify a noble class that had no comparable structure anywhere in Europe and was equally regarded as a marker of personal identity.

During the 17th century Persian scarves, woven mainly in the workshops of Kashan, were imported into Poland through the Turkish markets for use as sashes, but the Persian textile trade ended with the Afghan invasion of 1722. Against the background of almost constant war and upheaval which followed workshops were introduced into Poland, encouraged and supported by the wealthy and influential nobles, to produce items including textiles that had previously been imported. Armenian exiles in Constantinople began the production of Stanbul Sashes exclusively for the Polish market and subsequently transferred their operations and specialist equipment to Poland. The first sashes with gold and silver threads were made around 1740 in Słuck under the direction of Armenian weavers.
In 1758 Jan Madzarski, an Armenian from the Radziw ‘Persian’ workshops, became the foreman at Słuck where some of the most beautiful and original designs, combining Persian, Chinese and Turkish motifs, were produced. It was here that four-sided designs, such as this example from Masłowski’s workshop, were invented. Sashes were woven double-sided in taqueté (weft-faced compound weave) with the warp divided in two along its length by the design. The sash could be folded to display any of the four possible colour-ways that were produced. The brightest part, often enhanced by silver, would be worn at weddings and other festive occasions; the parts with a black, or dark, background were worn during funerals and sombre occasions.

This sash is a comparatively late example of Polish sash manufacture. Masłowski learned the art of weaving in Kobyłka, near Warsaw, and was one of several Polish nationals to set up a workshop in or around Kraków. However, he received a royal warrant in 1787, which considerably enhanced his workshop’s reputation. The sashes produced there are identified by letters woven into the fabric: ‘FRANCISCUS MASŁOWSKI: CRACOVIAE’ or ‘ME FECIT CRACOVIAE : FRANCISCUS MASŁOWSKI’ and were made only to order

Sash woven in silk and metal threads in a compound weave, and with gold fringed ends. With an overall gold ground, which on one side is combined with silver, the other with a light purple so that when the sash is folded in half lengthways, either the silver or the purple shows at the front side. Flowers and leaves make up the design in blue, pink and green. The name of the factory is woven into one end.

'CRACO: / :VIAE.' and 'FRANCISCUS. / MASLOWSKI.'
Inscribed on the edges

Purchased from the London dealer C.John.

Francis Maslowski (d. 1830), whose name is woven into this sash, was a Polish weaver who received a royal decree in 1787, having set up his own independent workshop. His sashes were noted for bright colouring.

The woven inscription gives the name of the factory, which was founded in 1786. Natalie Rothstein suggested in 1968 that the pattern was copied from a design woven at Sluck (see , for example, 524-1906), but carried out more lavishly. The ends are identical to the sash illustrated by Maria Taszycka, 'Ceinturres de Soie - accessoires du costume de gentilhomme polonais' . CIETA Bulletin, January 1968, p. 85, illus. p. 96 and comment p. 97.

Sash woven in silk and metal threads in a compound weave, woven by Francis Maslowski, Kraków, 1786-1806

This elaborately decorated sash would have been worn by a nobleman, as part of Polish national dress. Sashes were originally imported from Persia (Iran), but they were made in Poland by the early 18th century in a new form – woven to be double-sided. Tied around the waist, the sash could show off any of its four colourways, with the brightest part worn outermost during festive occasions.