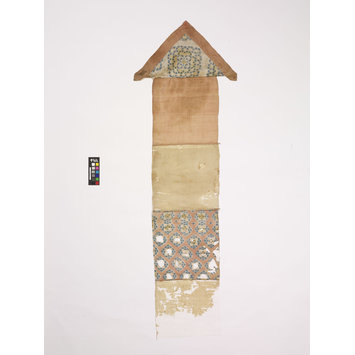 This religious banner was brought back from Central Asia by the explorer and archaeologist Sir Marc Aurel Stein (1862-1943). It was recovered from Cave 17 of the Mogao Grottoes. This shrine site is one of China’s great Buddhist pilgrimage complexes and is situated near the oasis town of Dunhuang. The shrines were carved out of the gravel conglomerate naturally occurring in the region. The insides of each cave-shrine were painted with coloured murals, some of which survive to this day. By the Tang dynasty (618-906 AD), from which this textile dates, there were a thousand caves decorated with religious scenes.

The Cave of the Thousand Buddha, one of several called by that name in the area, is named after a legend concerning a monk’s dream of a thousand Buddhas appearing on a cloud to one side of the valley where the caves are situated. Most of the textiles from this site would have been used as banners or wrappers for religious texts. The site is also part of an area of Central Asia we now call the Silk Road. This term was first used by the German scholar Ferdinand von Ricthofen (1833-1905) and it refers to a series of overland trade routes that crossed Asia from China to Europe. The most notable item traded was silk. Camels and horses were used as pack animals and merchants passed the goods from oasis to oasis. The Silk Road was also important for the exchange of ideas. While silk textiles travelled west from China, Buddhism entered China from India in this way.

Attached to banner is a circular sticky label showing Stein number possibly in Stein's handwriting or that of his assistant, Miss F M G Lorimer. 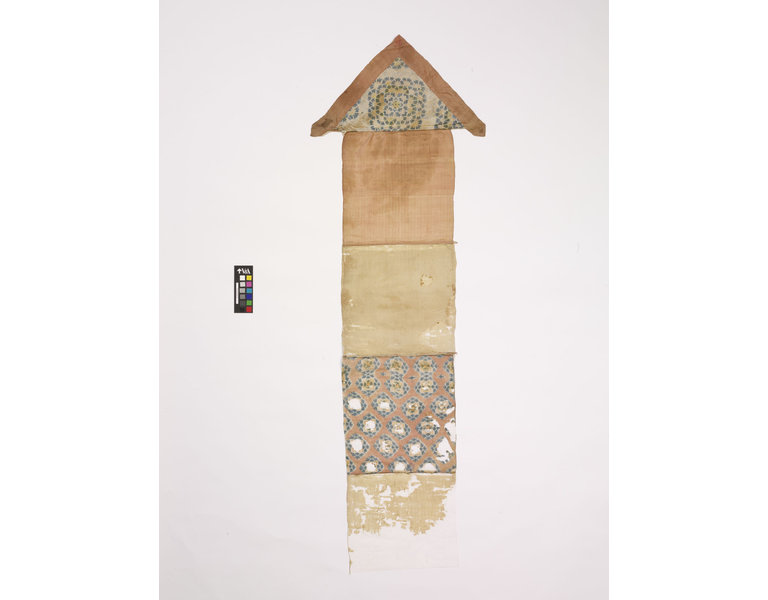