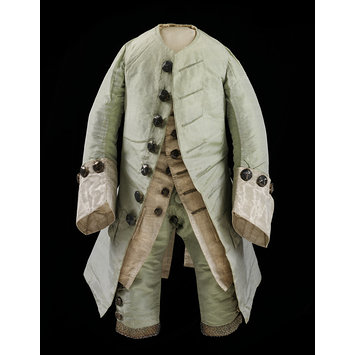 From the late 17th century, men wore a three-piece suit for formal dress, comprising a coat (in French, justaucorpsor in later 18th century habit), waistcoat (veste) and breeches (culottes). In France, the whole ensemble was known as the habit à la française. Both England and France had a good reputation for men’s tailoring in the 18th century. In France, this skill was learned through a seven-year apprenticeship, at the end of which the apprentice had to produce a ‘masterpiece’ which proved his competence in the necessary skills of his trade.

This suit is cut and constructed in exactly the same way as a full-sized adult suit. It is however too small to fit a child’s body, which suggests that it was made half-size on purpose so that a tailor could demonstrate his skills and show the model to a client. A miniature suit would presumably have been easier to circulate than a full-sized model and would have been less costly in materials: silks and buttons of this type were expensive commodities in this period.

England (possibly, made)
France (possibly. The suit follows the style of fashionable men's clothing worn across western and parts of eastern Europe in this period so, without full provenance, it is impossible to be certain where it was made or used., made)

Given to the museum by Miss H. Prescott-Decie. There is no record on file of previous provenance.

Probably made as a model by a tailor to sell his wares, the suit is too small to be for a boy, and probably too luxurious to be an apprentice's masterpiece. The colour of the silks and their use of metal threads suggest that the suit was echoing men’s court attire which was made of different qualities of silk, and made use of ostentatious decoration. The collar. sleeves, cuffs and pockets of the coat are comparable with the French suits that survive in the Royal Armoury in Stockholm, falling in style between the wedding suit that Gustavus III ordered from Paris in 1766, the suit he wore when travelling incognito as Count of Gotland to Russia in 1777. The latter seems very close to this suit in that the coat and breeches are a similar colour of green (celadon) and the waistcoat is made of a cream coloured ribbed silk.

Miniature three-piece suit, consisting of a coat, waistcoat and breeches, about 1760-65.

This suit is cut and constructed in exactly the same way as a full-sized adult suit, but is half-size – too small even to fit a child’s body. A tailor probably made it to advertise his skills to prospective clients. It would have been easier to transport than a full-sized model and less costly in materials.

Possibly France or England
Silk and silver; silver buttons and braid
Given by Miss H. Prescott-Decie
[09/12/2015]

The quality of this suit suggests it was made by a skilled tailor, either an apprentice who had successfully completed a long apprenticeship to become a master tailor (maître tailleur d'habits), or a master tailor who was used to making bespoke clothing for a range of middling and aristocratic clients. This suit is cut and constructed in exactly the same way as a full-sized adult suit. It is however too small to fit a child’s body, which suggests that it was made half-size on purpose so that a tailor could demonstrate his skills and show the model to a client. The silks are those that would have been readily available from any good mercer, or which might have been kept in small supplies by a tailor who knew his clientele might request them. The green taffeta and lighter weight plain woven silk (possibly an example of what was called sarcenet (armoisin, in French) were amongst the simpler silks woven in many European countries at that time, while the moire with its silver thread and surface finish was more complex and therefore more expensive to make and buy, and woven in specialist centres. The French had such a high regard for English watered silks that they invited English craftsmen to France to teach them the technique in the mid 18th century.

Both coat and waistcoat echo the patterns presented in Garsault's essay in Diderot’s Encyclopédie (1769) in the section on tailoring (Plates VI & VII), although the coat has a small collar that is not shown in the patterns. The collar became more prominent from the 1770s onwards. The buttons are very similar to those presented by Diderot under the trade of button and braid maker or boutonnier-passementier (Plate VI, fig. 8) which were made of flat metal thread. 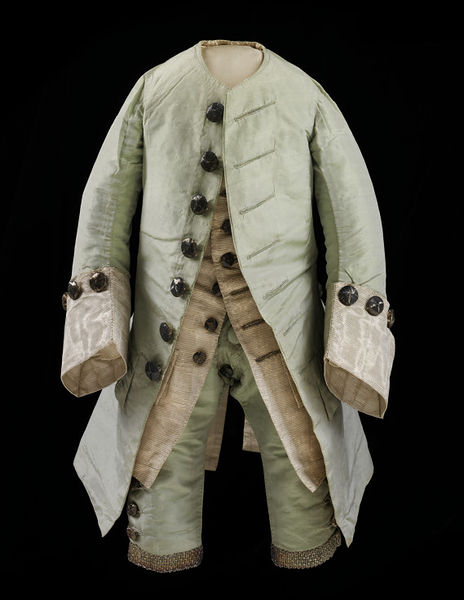