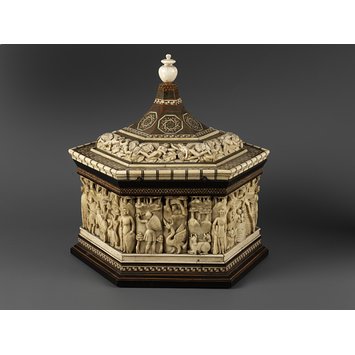 The Story of Jason

This (marriage) casket depicts the Story of Jason and is made by the workshop of the Embriachi, in North Italy, Florence or Venice, in about 1390-1410.
The story of Jason was first written in the 200s BC by the Alexandrian poet Apollonius of Rhodes. According to the Argonautica written by Apollonius, Jason led the Argonauts on their voyage to capture the Golden Fleece from Aeetes, King of Colchis on the Black Sea. The King's daughter Medea fell in love with Jason, and by her skill in magic helped him overcome various mortal dangers and win the fleece, which hung from the branch of a tree guarded by a dragon. Having won the fleece Jason and Medea fled from the wrath of Aeetes back to Greece. Jason later abandoned Medea and married a Greek woman causing Medea to seek revenge.
Although one of the most famous of the Greek heroes, Jason is not widely represented in Renaissance art, but nevertheless Jason caskets were a common type in Baldassare Ubriachi's workshop, and were produced in various formats: rectangular, ocatgonal and hexagonal.

The Embriachi workshop was a north Italian family of entrepreneurs and carvers. The precise location of the workshop is unknown, except that it originated in Florence and in ca. 1431 there was apparently a workshop in Venice, in the area of S Luca.
They employed local workers specialising in 'certosina' (inlay of stained woods, bone and horn), and the workshop produced items carved in bone (usually horse or ox) with wood and bone marquetry.
As well as altarpieces, the workshop also made caskets as bridal gifts to hold jewels or documents, and these were often decorated with scenes from mythology.

The casket depicts the Story of Jason. The sides of the casket are decorated with a continuous frieze of carved bone plaques, applied with glue to the wooden carcase, and framed above and below with intarsia decoration. The lower frame takes the form of an illusionistic running battlement, while the above is an interlocking run of six pointed stars. The steeply rising lid, which is still attached by its original hinges, is decorated with a narrow band of carved bone plaques, and further intarsia. The current ivory finial is post-medieval, probably of the seventeenth or eighteenth century.

The narrative begins on the front of the casket. Each scene is composed of three plaques, while at each of the corners stands a male figure wearing a tunic and holding a shield and a club. Scene 1 depicts Jason kneeling before Peleus. Scene 2 shows Jason kneeling before Medea, who hold a child-like idol of Jupiter; the other two panels in this scene show Jason on a boat being taken towards a shore on which wait the dragon and above, in a cave, the ram (the Golden Fleece). Scene 3 shows Jason fighting the bulls, while dragon and ram look on. Scene 4 shows Jason fighting the dragon, while beyond the pacified bulls sit on the ground. Scene 5 shows Medea with the dead body of her brother, while the other two plaques depict Jason and Medea on board the Argo with the ram and a shoreline with city (Thessaly?). Scene 6 shows Jason and Medea presenting the ram to Peleus.
The carved bone frieze around the lid is composed of pairs of nude winged boys against a foliage of rose leaves. The boys reach for each other, touch hands, to caress each other's faces; the plaque above the lock depicts two kneeling amorini, each supporting a blank shield, as space for the heraldic plaques that could be fixed there.

Italy (North; Venice or Florence, made)

Workshop of the Embriachi (sculptor)

Wood, inlaid with "alla certosina" marquetry of horn and covered with bone plaques, on a carcase of poplar

Given by Dr. W. L. Hildburgh, F. S. A., 1952, having been on loan previously. A note in Hildburgh's hand on the back of a photgraph records that he acquired the piece in Brussels in 1924.

Casket, wood and bone marquetry, the Story of Jason, by the Workshop of Baldassare Ubriachi, North Italy (Florence or Venice), ca. 1390-1410 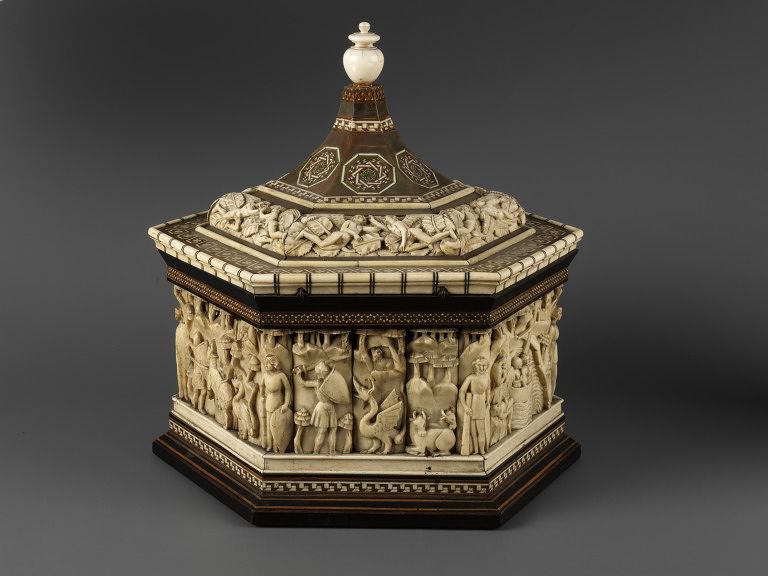