If you would like a larger file, or to use the image in other ways, contact our Licensing team.
BETA
+3
BETA
+1
images
On display at V&A South Kensington
Ceramics, Room 145

ca. 1650-1700 (made)
This teapot was made at Dehua, of white porcelain known as 'blanc de Chine' in the west. One side is very subtly incised with a design of rocks and plants, and the other with a poetic couplet that reads: 'At night in springtime one moment is precious like a thousand pieces of gold, the orchid sends forth its fragrance in the shade of the moon.' These are the first two lines from a poem by the famous eleventh-century writer Su Shi. It might be assumed from this that the teapot had been commissioned by a scholar. However, Chinese scholars traditionally preferred the 'purple sand' teapots from Yixing, not white ones from Dehua. Examples in Dehua porcelain were probably made after the kilns diversified into tea-ware production, following demands from European merchants for European shapes. Dehua wares were closely copied at European porcelain factories, notably Meissen, Chantilly and Bow. Ceramic historians argue that Dehua's raw materials are superior to those of Jingdezhen, but the kilns had no access to water transportation and until the arrival of European merchants most of its productions were sold locally.

The base is inscribed with the name of the Emperor Xuande, who reigned from 1426 to 1435, more than 250 years before the teapot was made. The use of earlier reign marks has a long history in China, much t the vexation of modern researchers, and was intended to indicate respect rather than to deceive. The teapot's bold geometric design anticipates the forms of European modernism by more than two centuries. 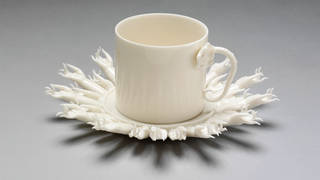 read Blanc de Chine – white porcelain from China 'Blanc de Chine, a Continuous Conversation', a display of contemporary and historic white porcelains made in Dehua, is open in our Ceramics (Room 146) and China (Room 44) galleries until 10 May 2020.
object details