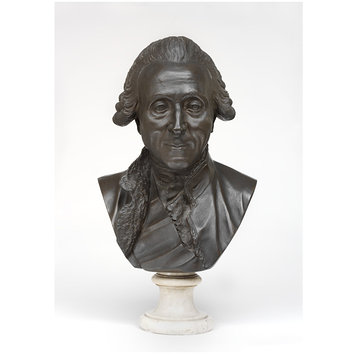 This bronze bust of the distinguished engineer Jean-Rodolphe Perronet (1708-1794), by the sculptor Jean-Baptiste Pigalle (114-1785), was shown in the Salon of 1785. It was Pigalle's last work. A lengthy and touching inscription on the back of the bust specifies that the sitter was aged 76 and 'his friend' Pigalle was 71 at the time this portrait was carried out.

Perronet was a high profile figure, presented with several honours for his work, which was principally to be in charge of bridges and major roads in Paris. He was appointed Engineer to the King in 1763 and was a member of the academies of architecture and the sciences. Here he appears distinguished but also pensive.

Pigalle was not a prolific portraitist but here has executed a striking portrait for which the terracotta study was sold in Paris in 1990 (Hotel Drouot, June 27, lot 127). He excelled in conveying contrasting textures in bronze, and this is seen here in the lace, fur and wig, and even the buttonhole.

The sitter, Perronet, is shown facing front and wearing a short Cadogan wig, a stock, a lace frilled shirt, and a coat with a fur-lined collar. He looks down and slightly to his left. The coat is turned and drawn back on the left side to reveal the broad ribbon of the Order of Saint-Michel. The bronze is set on a circular white marble socle.

Historical significance: The portrait of Perronet, a famous engineer, was the last work of Pigalle and an inscription on the back tells us that the sitter was 76 and the sculptor 71 at the time.

Perronet had been chief engineer to the French king for 20 years by the time his friend, the sculptor Pigalle, made this bust. Perronet improved the network of bridges and roads across France, and established the first school for training bridge and road engineers. He contributed an article on the fire engine to Diderot’s Encyclopédie.

‘Engineer. Engineers are constantly perfecting major roads, building bridges, embellishing streets, maintaining and repairing canals. An engineer’s work requires much study. The fundamental sciences are arithmetic, geometry, mechanics, and hydrology. An engineer must have some ability in drawing. Physics are necessary to judge the nature of materials.’ [09/12/2015]
JEAN-ROBOLPHE PERRONET (B. 1708; D. 1793)
French; signed and dated 1785
Bronze
By Jean-Baptiste Pigalle (b. 1714; d. 1785)

This portrait of Perronet, a famous engineer, was the last work of Pigalle and an inscription on the back tells us that the sitter was 76 and the sculptor was 71 at the time.
[1993 - 2011] 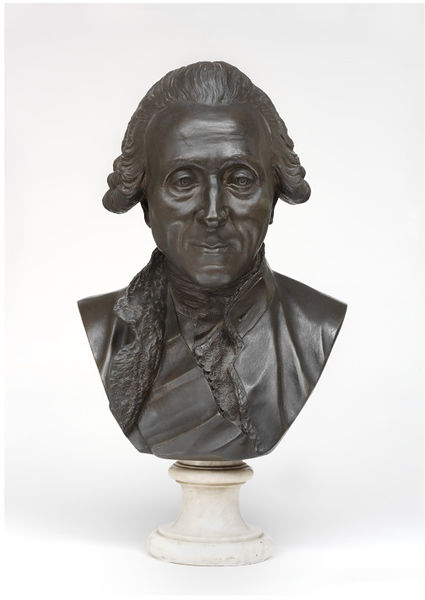