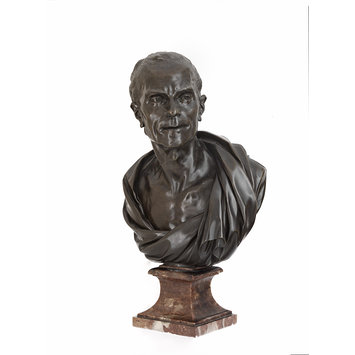 This bust is the masterpiece in portraiture by the sculptor, Louis-Simon Boizot (1743-1809). It represents Claude-Joseph Vernet (1714-1789), a celebrated landscape and marine painter and 'Peintre du Roi' (painter to the King). He was the maternal uncle of Boizot's wife. It may well have been commissioned by an admirer of Vernet, perhaps a collector of his paintings, and portrays him à l’antique; a format characteristic of the Neoclassical style and derived from the busts of Classical antiquity.

Boizot studied at the Académie Royale in Paris, and in Rome having won the Prix de Rome in 1762. He was accepted as a full member of the Académie in 1778 and thereafter exhibited regularly at the official Salons. This bust was exhibited at the Salon in 1783. Boizot returned to his preparatory model from which it was made when he was asked to create a marble bust of Vernet for the Grande Galerie of the Louvre in 1806.

Boizot is better known for small-scale and decorative sculpture. He was artistic director of the sculpture studio at the Sèvres Porcelain factory where he oversaw the design of over 150 models in biscuit porcelain, of which the V&A has several examples.

The subject is shown facing to his half left and stooping forward. He wears a Roman toga and his hair is close-cropped. The bust is set on a square socle of reddish marble.

Bronze on marble base

The sitter for this expressive and animated portrait was a painter of landscape and marine scenes. As was typical of the Neoclassical style, he is portrayed in the manner of busts of Roman emperors. He is shown with closely cropped hair and a draped gown, rather than in contemporary wig and fashionable clothes.

‘Sculpture: in its endeavours to imitate the surfaces of the human body, sculpture must not be satisfied with cold resemblance. It is living, vivid, passionate nature that the sculptor must express through marble, bronze, stone, etc.’ [09/12/2015] 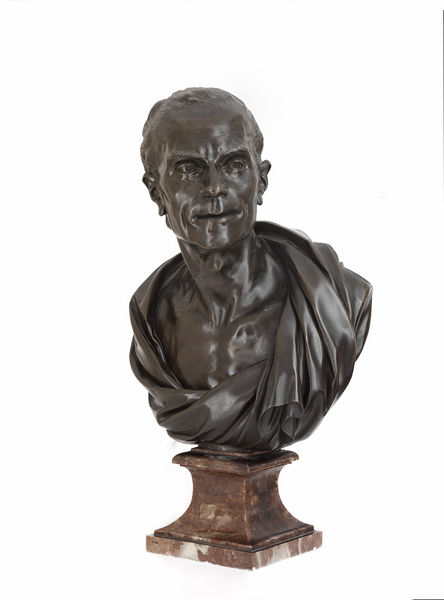