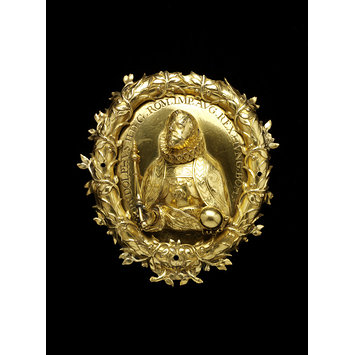 Oval plaque of gilt bronze with a relief portrait of Holy Roman Emperor Rudolph II gazing 3/4 to his right, his eyes raised to heaven. The silver laurel wreath that would have crowned him is missing; his left hand holds an orb (the cross on the orb is missing); his right hand holds a sceptre (the base slightly bent). Round his neck he wears the insignia of the knightly order of the Golden Fleece. The forearm and hands of the portrait are separately cast and attached at the elbow by a small nut and bolt. The nuts and bolts are handcut with a coarse thread and are technically consistent with an origin in the seventeenth century. The plaque with the portrait is cast in a high copper alloy, and is held by four pins into a separately cast frame of a laurel wreath with myrtle branches wound around it. The upper section of the frame is damaged: the outer edge of the laurel wreath has been eroded and leaves are missing from the twining foliage. Three grooves have been cut into the edge of the plaque at nine o'clock. These grooves are to acommodate a pin to secure the plaque to the frame. Only three pins survive: at 9, 12 and 3 o'clock. The frame is pierced at the top, bottom and sides with four holes which would have secured it to a piece of furniture or a casket.

'RVDOLPHVS .II. D[EI]. G[RATIA]. ROM[ANORUM]. IMP[ERATOR]. AVG[USTUS]. REX. HVNG[RIAE]. BOH[EMIAE]. 1575'
'Rudolph II by the Grace of God Eternal and August Emperor of the Romans, King of Hungary [and] Bohemia. 1575'
Rudolph's name, imperial and royal titles inscribed around the rim of the oval above his portrait; the date of his election as German King below his portrait.

x
Roman numeral '10' scratched on the verso of the plaque above the pin hole at the base. 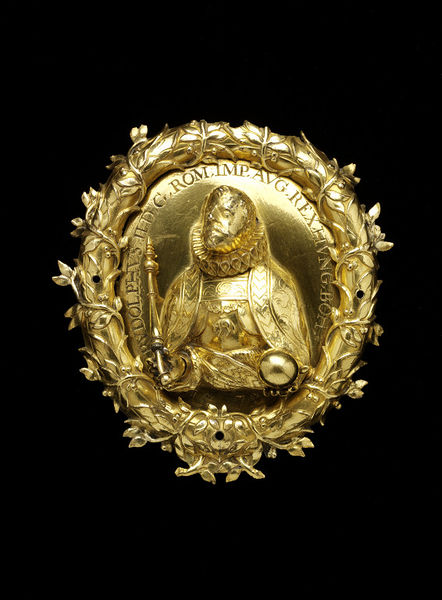