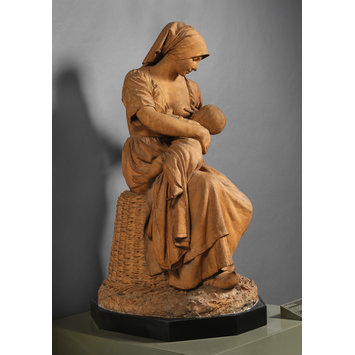 According to M. Dreyfous in Dalou: Sa Vie et Son Oeuvre, this composition was based on a group entitled Juno Suckling the Infant Hercules, which the artist later destroyed. Two slightly reduced versions of this composition exist: one in the Hermitage, St Petersburg, and the other also in the V&A (Museum no. A.27-1912). The slight reduction in size of these two versions suggests they were cast from a mould taken from this piece, but they may have been slightly reworked by the artist.

There are also a number of small-scale versions of this group. A terracotta (height 45 cm) in the collection of Mr and Mrs Michael Travers (formerly in the collection of P. M. Turner) is signed and dated 1872. It is possible that this is the original sketch model, as it is the earliest dated version of the group. Another terracotta is in the Fitzwilliam Museum, Cambridge (dated 1873; height 49 cm), and there are two in private collections.

A plaster version is in the Petit Palais, Paris (height 52 cm). This was the model for editions by Susse Frères in bronze and Sèvres in biscuit porcelain (no. 1045). A marble version of the same group, probably a workshop piece (height 94.5 cm) was sold by Matthiesen's, London, in 1955 to an English private collection. From there it passed in 1986 to a French private collection. An engraving of this composition (a mirror image) was made by Achille-Isodore Gilbert and published in 1876 in an article about the London art world in the journal L'Art. A drawing, also a mirror image, was then made from this engraving by Vincent Van Gogh.

Dalou (1838-1902) was the son of a glove maker and initially trained in drawing at the Petit École in Paris. There he was encouraged to do sculpture. In 1854 he entered the École des Beaux-Arts, where he trained for four years. He was known for his left-wing political sympathies and was involved in the establishment of the Paris Commune in 1871. After his overthrow he was forced into exile in London, where he lived from 1871 until his return to Paris in 1879. In London he frequently exhibited at the Royal Academy and he was given a teaching appointment at the National Art Training School in South Kensington (later the Royal College of Art), where he had a profound effect on the development of British sculpture.

Figure group: a peasant woman wearing a simple headress seated on an upturned basket is about to suckle an open-mouthed child wearing a robe and bonnet.

Provenance: Purchased from the artist for 300 guineas in 1873 [and made for] Sir Lionel Coutts Lindsay, Bt, London and was exhibited at the Royal Academy the same year. Subsequently in the collections of Lord and Lady Wantage, Lockinge, Oxfordshire and then A. Thomas Loyd, Lockinge. Loyd presented it to the Tate Gallery in 1924. Transfer from the Tate to V&A in 1969 on long-term loan, this piece was at the Bethnal Green Museum between 1973 and 1983, and was formally accessioned by the V&A in 1993. See Tate Gallery Papers Part 3 1970-1973 RP 73/1571 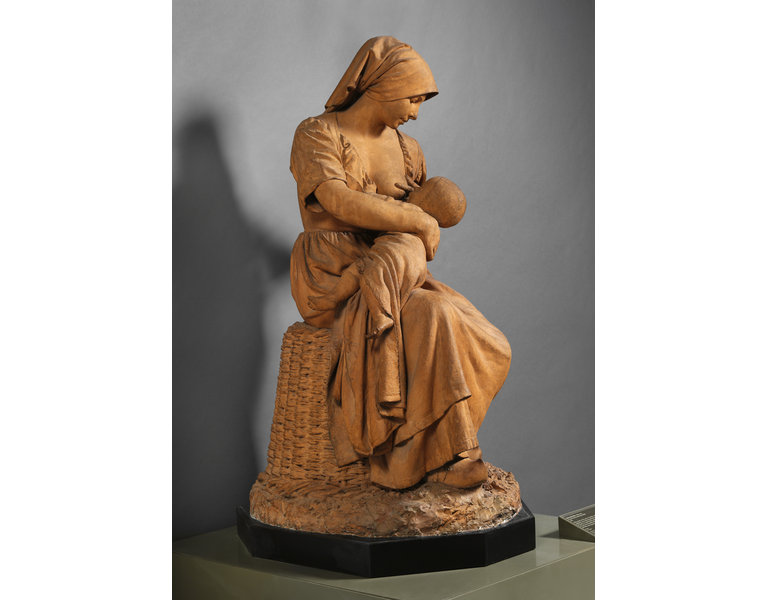