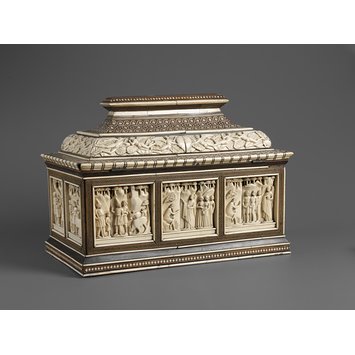 Scenes from the Life of Paris

This is a casket made by the Workshop of Baldassare Ubriachi (Embriachi), in about 1390-1400 in Florence or Venice. The scenes on this casket tell the story of Paris from his birth to the episode of his judgement in the contest between three goddesses over who was the most beautiful. Caskets such as this were popular in northern and central Italy in the early fifteenth century, and seem most often to have been intended to form part of the gifts given by a prospective husband to his espoused wife following the conclusion of negotiations between the two families, but prior to the exchange of vows and rings. The subjects of such caskets were often drawn from classical mythology. These subjects were familiar to the prosperous Italian merchant class, as a number of surviving texts telling the stories in Italian demonstrate. The compositions used on this casket for the story of Paris differ in a number of respects from most of the other Embriachi caskets depicting the subject, and it seems likely that this is a relatively early example.

The sides are decorated with applied bone plaques representing scenes from the story of Paris; three scenes on the long sides and two on the short. Each scene is framed with bone mouldings, and outer frame is formed of a running ribbon motif in intarsia. The front and left faces have a ribbon motif in white, while the back and right faces have bone stained green to form the intarsia pattern. Behind the plaques blue paper has been pasted to the carcase, so that it is visible through the pierced areas; in addition red fabric has been pushed behind the plaques in the areas of pierced foliage. The lid is of rising, stepped form, the lower part decorated with applied bone plaques, while the rest of the area is taken up with intarsia decoration and applied strips of horn.
The narrative starts at the left of the front face, and moves left to right around the sides of the casket. Scene 1 takes place within the palace of Troy: the infant Paris is handed to attendants of Queen Hecuba to be killed. In scene 2, Paris is first shown when about to be stabbed, before the narrative leaps to the next moment, when the shepherd Agelaeus hands the child to his wife; the central panel in this scene is pierced at the top to allow for the key hole, and is now damaged. The third scene appears to be out of sequence: the first plaque shows Paris being handed to Agelaeus, while the others show the shepherd approaching three women, presumably the attendants sent to kill Paris. Scenes 4 and 5 depict the young Paris acting as a shepherd, with a herd of bulls, firing a shot from his bow while two young men look on in the first and are engaged in conversation in the second. Scene 6 shows Agelaeus and the young Paris confronting two men, the bulls in the background. Scene 7 shows Mercury appearing to Paris in a dream, and asking him to act as judge between the three goddesses. In scene 8, the three goddesses, now naked, appear to the sleeping Paris, who performs his judgement while Mercury looks on, holding the golden apple. Scene 9 shows Paris crowning the bull. The final scene takes place in the palace: Paris having taken part in the funeral games, and still carrying his bow so that we can identify him, is recognized by King Priam.
The lid, with a band of winged amorini against rose leaf foliage; two of the angels support an escutcheon in the centre of the front and back.

Venice (or Florence, Made)
Florence (Possibly, Made)

Bone, horn and wood inlay on a carcase of wood

Casket, wood inlaid with "alla certosina" marquetry, depicting scenes from the life of Paris, by the Workshop of Baldassare Ubriachi, Italian (Florence or Venice), about 1390-1400 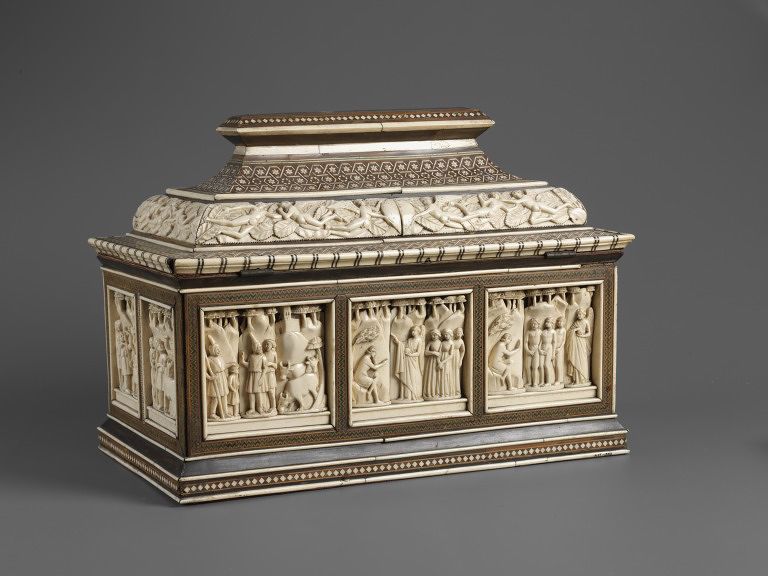