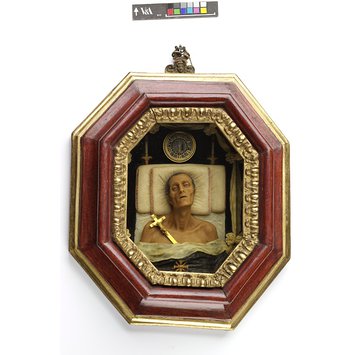 This small framed wax is one of a set of four showing souls in different states (see also A.20 to 22-1982). These highly realistic and dramatic wax tableaux served as ‘memento mori’, intended to inspire thoughts on mortality. Wax modelling had already acquired a certain status by the sixteenth century, as it is ideal for producing the type of intricate workmanship on a small scale which can be seen in this object, and enhanced by the use of colour and texture to mimic flesh. The inscription on the back of the frame, ' Mors malis vita bonis' is Latin for 'Death to the bad, life to the good' and is from the text of the Lauda Sion, which is a sequence sung during the Corpus Christi mass, written by the thirteenth-century theologian, Thomas Aquinas.

A naked male corpse lying in a coffin, the head resting on pillows and a sheet with a black coverlet pulled up to the chest. The background is black glass, decorated with white wax swags to resemble the lining of a coffin. A gilt crucifix is placed at the corpse's shoulder. A modelled clock standing at midnight and two lit candles painted onto the background decorate the coffin above the pillows. The scene is mounted in a deep stained and gilded box frame and is inscribed on the back.

'Mors Malis Vita Bonis'
on back of frame

This wax is one of a set of four which have previously been described as having been produced by the workshop of Giulio Gaetano Zumbo, following John Pope-Hennessy's attribution of other related waxes already in the collection at the time of their acquisition (A.65 & 66-1938; Pope-Hennessy 1964, op.cit.). However, more recently historian Gabriele Finaldi (1994, op. cit.) has attributed similar waxes, formerly on the New York art market, to the painter and sculptor Giovan Bernardino Azzolino (c.1572-1645), known to have been a wax-modeller, which also represent souls in Paradise, Purgatory and Hell, which suggests that these may also be by the same artist.

Waxes showing the fate of the soul

These dramatic and highly realistic wax sculptures depict the possible fate of the immortal soul. According to Catholic doctrine, the soul is judged at death and sent to Heaven for eternal reward, Hell for eternal punishment, or Purgatory for a period of purifying repentance. These sculptures were probably for private devotion, a potent reminder of the terrifying fate of damnation and that time in Purgatory could be lessened through the prayers of the living.

Inscribed on the back of the frame in Latin ‘Death to the bad, life to the good’ 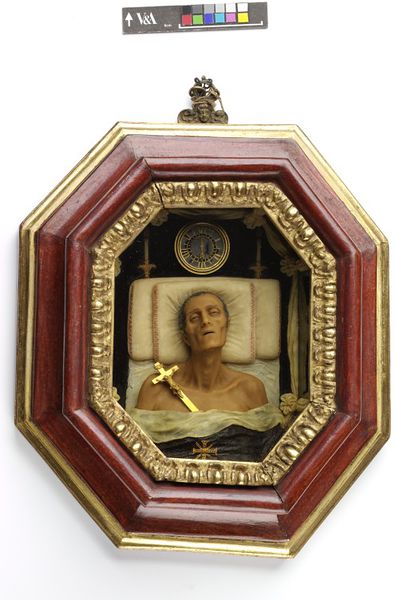