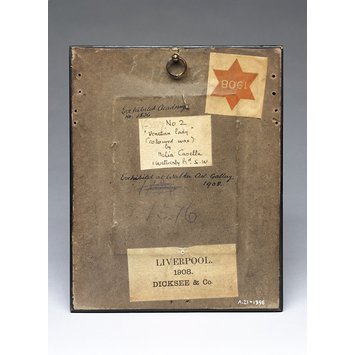 A coloured wax portrait relief of a woman, facing left, with scroll work inscribed 'Silvia Bella', by Nelia Casella. The relief is ornamented with seed pearls and tiny paste gems, as well as some gilding.

Wax is an organic substance derived from animals and plants, an inexpensive and versatile material that has long been used by artists for sketch models and small sculptures. It is quick and easy to shape, yet also inexpensive. Once softened, it is modelled in a similar way to clay, with the composition built up gradually. To enhance the wax, pigment can be added before moulding and pearls or other jewels can be embedded in the surface afterwards. Wax was thought to be particularly well-suited to women since more traditional methods and materials such as wood or stone carving were considered to be messy, dangerous and unsuitable for ladies.

Ella Casella (1858-1946) and her sister Nelia Casella (1859-1950) were artists who worked collaboratively in a variety of media: wax, watercolour, glass enamelling, leather tooling and metalworking. In the 1880s, they studied under Alphonse Legros (1837-1911) at the Slade School of Art and exhibited both at the Royal Academy and with the Arts and Crafts Exhibition Society in the 1890s. As part of the revival of Renaissance art by British artists in this period, the Casella sisters drew from a Renaissance tradition, in form and method, aligning themselves with great masters such as Pisanello (1395-1455).

Actively involved in the thriving artistic and cultural life of turn of the century London, these artists’ were inspired by theatrical costuming of the period and many of their wax relief portraits represent friends from their circle, including many celebrities of the day such as Ellen Terry, Henry Irving, Franz Liszt and Bram Stoker. As well-educated ladies of wealth and distinction, both their gender and social standing played a predictably pivotal role in the development of their art, training, and working practice.

This is one wax of a group of twenty-nine wax sculptures bequeathed to the Museum by Edward (Teddy) Pyke. Mr. Pyke had devoted most of his life to the study of waxes and his book Biographical Dictionary of Wax Modellers', published in 1973, continues to be the most comprehensive resource on wax modellers. His own collection was wide-ranging, and included British, German, French and Italian portraits and figure subjects from the sixteenth century up to the present day. His generous bequest augmented and complemented the then existing holdings of waxes in the Museum, which is regarded as the National Collection. 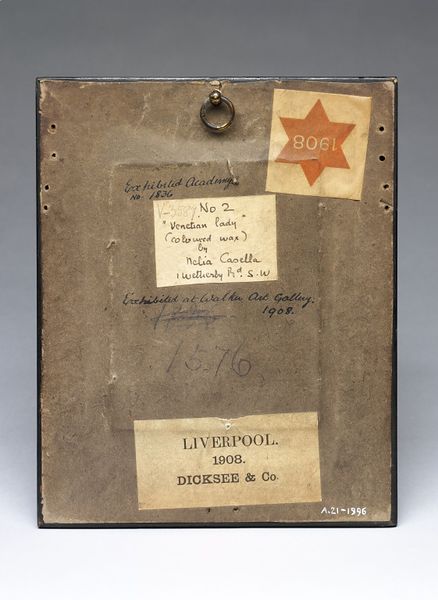