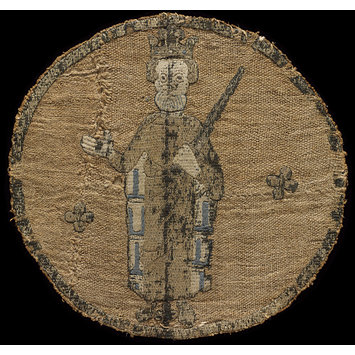 This small round panel worked in the famed English medieval embroidery known as opus anglicanum (Latin for English work) is a rare survivor from such an early date.

It may originally have been attached to a cope, an ecclesiastical garment like a cape which is generally worn on ceremonial occasions. It came to the Museum in 1864 from the collection of Canon Franz Bock. Panels applied to copes, occasionally described as circular, are mentioned in various inventories including one of 1245 from St Paul's Cathedral in London.

The gold-rimmed roundel shows the standing figure of a crowned king, raising a sword in his left hand. The king's hair, beard, face and hands, as well as the lining of his mantle are worked in coloured silks, with the rest of the figure embroidered in underside-couched silver-gilt thread. Two golden quatrefoils decorate the roundel's background: a third is placed between the king's feet. Originally covered in purple silk, visible in minute traces, the roundel's plain linen under-layer is now completely exposed. A tear on the right side of the figure has been repaired in modern times.

Purchased from Canon Franz Bock, described by him as Byzantine late 12th century and probably part of an antependium. In 1888 redescribed by Alan Cole as possibly Rhenish or Norman. In Kendricks' revision in 1904 said to have come from the Cathedral of Halberstadt, Germany. Labeled on the back with round parchment label "Dr. B. C. 17" (Bock's collection).

Panels (tasselli) were occasionally said to be circular, mentioned in the 1245 inventory of St. Paul's cathedral and in other inventories. The figure resembles those on the stole of St. Edmund Rich in Sens Cathedral, and the footgear of Bishop Walter de Cantelupe in the V&A, Worcester Cathedral and the British Museum.
The miniver lined mantle the figure is wearing (easily recognised by the white blocks with edging of grey, which was made up from the bellies of the Baltic squirrels taken in winter) was particularly fashionable in the 13th and 14th centuries. The figure of the King also has his hair slightly wavy as was fashionable at the time, and can be seen in contemporary royal effigies.

Christie, Grace, English Medieval Embroidery: A Brief Survey of English Embroidery dating from the Beginning of the Tenth Century until the End of the Fourteenth (Oxford, 1938), cat. no. 38

Baker, Malcolm, and Brenda Richardson (eds.), A Grand Design: The Art of the Victoria and Albert Museum, exhibition catalogue, Baltimore, Museum of Art, and other venues (London, 1997), cat. no. 130 (Linda Wooley) 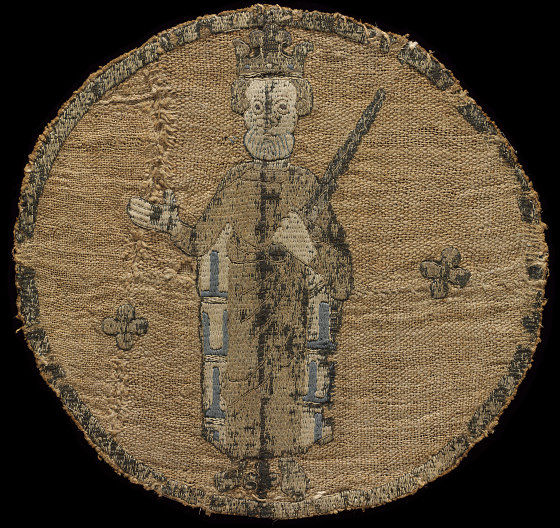