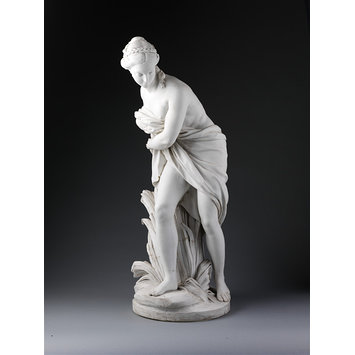 The model for this large biscuit porcelain figure was created by Etienne-Maurice Falconet, a successful sculptor who worked for the French royal court in the 1750s and 1760s. Many of his models were inspired by the work of the peintre du roi, François Boucher. Boucher (thirteen years his senior) may have introduced him to Mme. de Pompadour, the mistress of King Louis XV and a great patron of the arts, who commissioned Falconet to make a marble sculpture, depicting herself as an allegory of 'Friendship' in 1755. This provided his first link with the porcelain factory as he provided a model of 'Friendship' for production as a biscuit sculpture in the same year. He was appointed Director of Sculpture at the factory in 1757 and his role was to supply models and supervise their manufacture, visiting the workshops once a week. (He also continued his work as an independent sculptor in Paris during this period.) He produced a total of sixty models from 1757 until 1766, including some vases. In September 1766 he left France to go and work for the Empress of Russia, Catherine II, in St Petersburg.

This model was introduced in 1762 and was called the Baigneuse nouvelle (New Bather) as it was a pendant to an earlier figure of a bather produced in 1758. It was later known as the Baigneuse aux roseax (Bather with reeds) and was made in several sizes, of which this is the largest.

Glazed figures in the manner of the great Meissen factory were not a great success at the factory as the glaze pooled in the crevices of the soft-paste models, blurring their definition. Unglazed figures, called biscuit porcelain, resembled carved marble but could be mass-produced in moulds and were therefore an ideal product. Jean-Jacques Bachelier, Artistic Director at the factory, claimed to have invented biscuit porcelain in 1749. Biscuit figures were first produced at Vincennes in 1752 and continued to be popular after the factory's move to Sèvres in 1756.

Figure of a bathing nymph 'Baigneuse nouvelle' in biscuit porcelain.

Previously identified by Emile Bourgeois as the Baigneuse á l'éponge, a figure in fact modelled by Louis-Simon Boizot in 1774. See no. 97a of the Falconet catalogue (see below) for this model, also the chronological list of models by Tamara Préaud on p. 111. It first appeared in the factory records in 1762 as 'Baigneuse nouvelle' or Pendant de la Baigneuse, but was later known as La Baigneuse aux roseaux. It was the pendant model to la Baigneuse or la Nymphe qui descend au bain, a model created in 1758 after the marble original of the previous year. The latter is depicted getting ready to go in the water and tests it with the tip of her toe (for the marble see catalogue no. 6 and a version in the V & A, 1131-1882), this model on the other hand has just come out of the water and is wrapping a towel around herself to get warm or get dry. The proximity of the water is indicated by the reeds which also serve to support the figure.

Biscuit figures were first produced at Vincennes in 1752 according to an essay by Antoine d'Albis in the Falconet exhibition catalogue. Glazed figures were not a great success at the factory as the glaze pooled in the crevices of the soft-paste models, unglazed figures which resembled carved marble but could be mass-produced in moulds and were therefore an ideal product. Jean-Jacques Bachelier, directeur artistique at the factory claimed to have invented biscuit porcelain in 1749.

The designer of this model was the artist Etienne-Maurice Falconet who was appointed in 1757 to provide models for biscuit figures and to supervise the biscuit workshop. Falconet himself only visited the manufactory once a week in order to direct a team of sculptors producing terracotte models. These in turn were used to create plaster moulds. Falconet's models were initially inspired by drawings and paintings of François Boucher. Boucher had supplied Sèvres with drawings since 1748 and was probably known personally to Falconet as both of them benefitted from the patronage of Mme. de Pompadour and worked for her at the Château de Bellevue.

According to an essay by Véronique Milande in the catalogue, Falconet produced about sixty models for the factory in total, but only twenty of his original clay models have survived. On 12th September 1766 he left for St Petersburg to work for Empress Catherine II of Russia.

Figure of a bathing nymph 'Baigneuse nouvelle' in biscuit porcelain, Sèvres porcelain factory, Sèvres, after a model by Falconet of 1762

Previously identified as the Baigneuse à l'éponge, this is now known to be the Baigneuse nouvelle identified in the records in 1762 and later known as Baigneuse aux roseaux. (Information kindly provided by Tamara Préaud, July 2012). 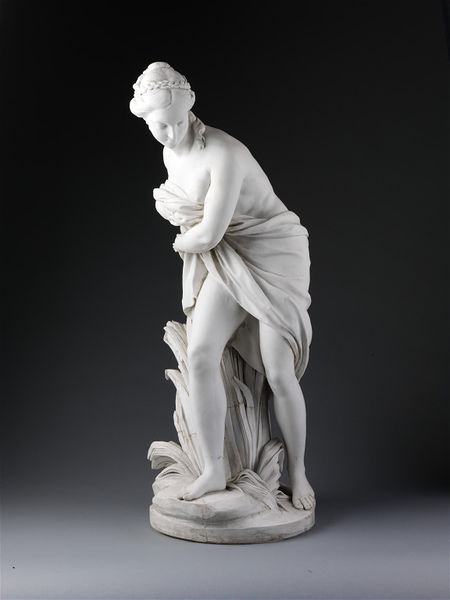