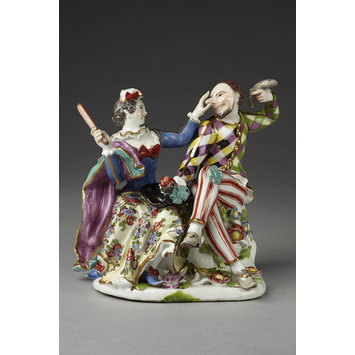 The Commedia dell’Arte, was a form of improvised street theatre, which spread from16th-century Italy throughout Europe, and remained popular for around two centuries. Commedia dell'Arte troupes engaged in very physical acting using music, dance and acrobatics in their performances. While the plot was largely improvised, stock characters were used and were recognisable to the audience by their costumes, accents and poses. The popularity of this theatre form inspired paintings and decorative objects depicting the commedia characters.

From the late 1730s and into the 1740s the Meissen modeller Johann Joachim Kändler produced a great variety of figures based on Commedia dell’Arte characters. On stage Commedia dell’Arte antics included bawdy humour which avoided censorship due to the improvised nature of the performances. This model of Harlequin waving a sausage at Columbine, while placing his hat on her lap, refers to his amorous intentions. This group is first recorded in 1740 in Kändler's list of new models.

Figure group of Harlequin and Columbine in hard-paste porcelain painted in enamels and gilded. They are seated on flower bestrewn stumps on a flowered pad base. She is holding a slapstick in her right hand and tweaking his nose with her left. He is wearing a bearded mask and is holding a sausage in his left hand and rests his right hand, holding his hat, on her knee. She is wearing a white hat with a red rosette, a blue tunic, turquoise and lavender cloak, a flowered skirt and blue shoes all trimmed with gold. He is wearing a lozenge diapered tunic in lavender, green, black, yellow and white, red striped trousers with turquoise rosettes and grey shoes. The hat is black with red and turquoise feathers.

This group is recorded as follows in the listing of Kändler's new models since the year 1740 'Taxa derer vom H. Modell-Meister Kaendlern, sur Königl. Porcelaine-Manufactur in Meiszen seit Ao 1740 gefertigten und gelieferten neuen Modelle' : 'One of the same (ie a small group) consisting of 2 figures in which a Harlequin has sat himself down by a lass in order to caress her, but she is hitting him with the slapstick'.'

Figure group of Harlequin and Columbine in hard-paste porcelain painted in enamels and gilded, modelled by J.J. Kändler in 1743, made by Meissen porcelain factory, Germany, ca. 1745. 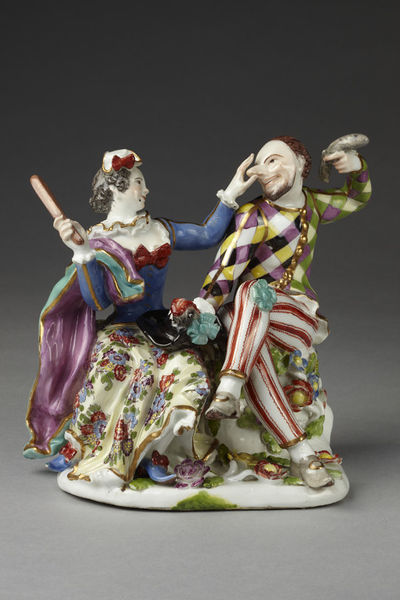