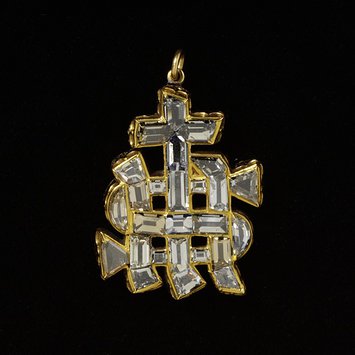 Diamond jewels were an intrinsic part of living nobly; they were a conspicuous emblem of wealth and were also believed by many to be endowed with magical powers. On this pendant, the diamonds have been arranged in the form of the monogram IHS. The three letter monogram, traditionally depicted at the top of the Christ's cross, is widely accepted as the Greek monogram for Jesus's name, IHS. This is formed from the first two letters plus the last letter of the name Jesus Christ in Greek (the letters iota, eta, and sigma).

A gold pendant formed of overlapping and interlocking capital letters 'IHS' with a cross rising from the central letter 'I'. Set in gold with 26 diamonds, all table-cut. Scrolling ornaments on the sides are chased and decorated with black champleve enamel. The flat gold back is unadorned. The cross terminates in a gold suspension ring.

Formerly part of the collection of Dame Joan Evans (1893-1977), art historian and collector. Early on she collected gems and jewels which resulted in the 1921 book, English Jewellery from the 5th Century BC to 1800. Her scholarly interest was established in 1925 by the book Life in Mediaeval France. In 1931 she used her research in adornment to write Pattern: a Study of Ornament in Western Europe from 1180 to 1900. That same year she was named honorary librarian of the Courtauld Institute, London. Evans produced the second of her studies of French medieval life in 1936, Monastic Life at Cluny, 930–1157, followed by Taste and Temperament (1939), Art in Mediaeval France (1948), English Art, 1307–1461 (1949), Cluniac Art of the Romanesque Period (1950), and Dress in Mediaeval France (1952). These were interspersed by histories of more contemporary subjects, such as her biography of Chateaubriand in 1939, Madame de Sérilly in 1946, and Joseph Joubert, published in 1947. In 1943 she published a family memoir, Time and Chance: the Story of Arthur Evans and his Forebears. After a biography of John Ruskin in 1954, she co-edited with John Howard Whitehead, Ruskin's diaries in 1956. Evans was elected the first woman president of the Society of Antiquaries in 1959 (through 1964). She donated her gem and jewellery collection to the Victoria and Albert Museum beginning in 1960. She was a trustee of the British Museum (1963-67). In her personal life, she donated time and money to many charitable historic causes, nearly all of them anonymously. Her will left collections to the Ashmolean Museum, Oxford, and the Birmingham City Art Gallery.

Diamond jewels were an intrisinc part of living nobly; they played a financial role and were also believed by many to be endowed with magical and thaumaturgical powers. This pendant is a devotional jewel.
IHS pendants were very popular in the 2nd half of the 15th century and in the16th century but were still worn during the 17th c. as can be seen on portraits of the time. This may be due to the prophylactic powers attributed to the Holy Name and the stones. The IHS jewels were the religious counterparts of the secular jewelled monograms.
A very similar pendant, known as the Mantua Morse, is in the Basilica of Santa Barbara in Mantua. Its history is documented. It was apparently made in South Germany and was given by the Duke and Duchess of Bavaria to their nephew and godson Vicenzo of Mantua at his christening in 1562. The V&A pendant must date from the same years.
A comparison piece is in the V&A collection (M.248-1923). The sacred monogram IHS is surmounted by a cross, with the three nails of the crucifixion below. It is made of gold set with hog-back diamonds. The back is enamelled with the symbols of Christ's passion. It is said to have belonged to William Howard Viscount Stattford, beheaded in 1680. It is thought to have in Southern Germany in the late 16th century.
Other examples of diamond pendants with the IHS monogram spelled in angular Gothic or Roman letters include a pendant (with 17th c. modifications) in the Schatzkammer der Residenz, Munich (given by Francesco III Gonzaga Duke of Mantua to his wife Katherine, who gave it to her elder sister Anna, Duchess of Bavaria). It is dated c.1600.

The jewel has a suspension loop and would have been worn on a chain around the neck, as shown in the portrait of Jane Seymour by Holbein (1537, Kunsthistorishes Museum, Vienna) or the portrait of Alatheia Talbot, Countess of Arundel by Daniel Mytens (c.1618, National Portrait Gallery, London)

Only small quantities of diamonds reached Europe until the Renaissance. They came mostly from India. They were treasured for their beauty, their financial value, their hardness and their perceived magical qualities. The word diamond comes from the Greek adamas meaning invincible. Anselm Boethius de Boot, physician to Rudolph II wrote in 1604 in his Gemmatum et Lapidum Historia that he doubted that diamonds could be a test of adultery but agreed that they could repel plague, witchcraft, madness, terror and evil spirits. Here, the power of the stones is reinforced by the power attributed to the IHS monogram. By the early 16th c. the development of diamond point and table-cuts allowed the brilliance of the stone to be better appreciated. Table-cut diamonds have a darker glitter and are often shown black in paintings of the period. A drawing by Arnold Lulls in his Album of Jewellery Design, V&A, c.1610 shows an IHS pendant in table-cut diamonds depicted in black. Table-cut and hog-back cut diamonds were often used on religious or secular jewels for initials and monograms. The rectangular table-cut and hog-back diamonds fit the angular letters well.

The three letter monogram, traditionally depicted at the top of the Christ's cross, is widely accepted as the Greek monogram for Jesus's name, IHS. This is formed from the first two letters plus the last letter of His name in Greek (the letters iota, eta, and sigma). Greek letters were later taken as latin ones and the monogram has been expanded into latin phrases:
IESUS HOMINUM SALVATOR (Jesus Saviour of Man)
IN HOC SIGNO [vinces] (In this sign [thou shalt conquer])
IN HAC SALUS (In this [cross] is salvation)
Less widespread, was the (usually Spanish) monogram of the Virgin Mary in which the letters MARIA were combined in the jewel. It was in favour later, mostly in the 18th c.

'IHS PENDANT
Table-cut diamonds set in gold, a cross rising from the central letter; the sides decorated with black enamel.
NORTH EUROPEAN: about 1550.
M.76-1975
Given by Dame Joan Evans, P.P.S.A.' 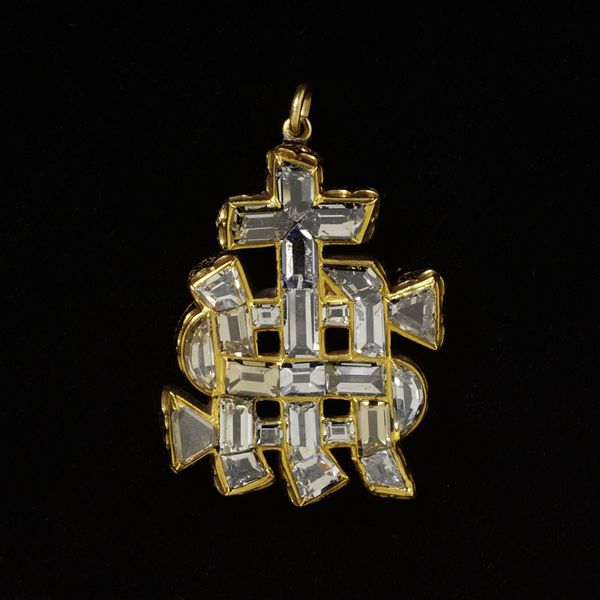