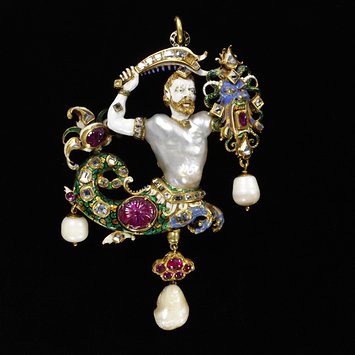 Pendant in the form of a merman with sword and shield; with a baroque pearl mounted in enamelled gold set with pearls, table-cut diamonds and carved Indian rubies.

Sold at Sotheby's, London, 16 July 1931, by Henry Lascelles, 6th Earl of Harewood, for £10,000. Presented to the Victoria and Albert Museum by an 'Anonymous American friend, per Messrs Bluett and Sons, 48 Davies Street, London W.1.' who from 18 September 1933 allowed herself to be identified as Mrs Edward S. Harkness of Eolia, Goshen Point, New London, Connecticut.

The auction catalogue provides a detailed description and the biblographic references which are numbered 1 to 4 below. It offers the following history:

'This jewel, according to tradition, was a gift from a Prince of the House of Medici in Florence to one of the Moghul Emperors of India. It is said to have been found in the Treasury of the King of Oudh when Delhi was captured in the Indian Mutiny and having been appropriated by the Indian Government was bought from them by Earl Canning K.G. (1812-62), first Viceroy of India. It was included in the sale of Earl Canning's Indian Collection, May 16-20, 1863, no. 628* [sold for £300 to the London dealer, Durlacher] and passed into the possession of Earl Canning's brother-in-law, the first Marquess of Clanricarde (1802-74), from whom it was inherited by the second Marquess of Clanricarde (1832-1916), who bequeathed it to his great-nephew, the present owner.'

'A BEAUTIFUL PENDANT ORNAMENT, formed as a Triton holding a sword and shield; the body, a large barrock-pearl; the sword set with gems; the head and arms and the shield of very fine cinque-cento work in enamel' ]

1. Loan Exhibition of Ancient and Modern Jewellery and Personal Ornaments, South Kensington Museum, 1872 [catalogue printed, London, 1873], no. 135. ['This splendid jewel was brought from India by Lord Canning, but appears to be of Italian cinque-cento work of the time of Benvenuto Cellini, and has been thought to be by his hand.' Lender: 'Marchioness of Clanricarde'. Illustrated Plate V. ]

2. Burlington Fine Arts Club. Catalogue of a Collection of European Enamels from the Earliest Date to the End of the XVII Century, London, 1897, no. 239 and plate LXVII. Described as 'Italian, 16th century'. Reference to the jewel by J. Starkie Gardner, introduction to illustrated catalogue, page xxi. No mention of Cellini. Lender: 'Marquis of Clanricarde'.

3. H. Clifford Smith, Jewellery (London, 1907), colour frontispiece, numbered as plate 1. Described on page 249 as 'probably the finest example of the numerous [Renaissance] pendants in the form of a single figure, particularly of those whose formation is suggested by a large baroque pearl, is the triton or merman jewel in the possession of Lord Clanricarde'.

4. Times, 27 February, 1922: 'perhaps the finest example of Renaissance Jewellery of the kind extant'; 'for boldness of design and skill in execution and for sheer magnificence , none can approach this jewel - a masterpiece of one of the great Italian craftsmen of the Cinquecento'.

On the title page of the auction catalogue in 1931 the jewel is described as 'The Magnificent Italian Renaissance Pendant Known as the The Canning Jewel, and attributed to Benvenuto Cellini'. A paragraph in the text is cautious:

'Questions of individual authorship in the case of great Italian Renaissance Jewellers remain notoriously, at the present time, rather vague in practically every instance. The present magnificent work has been attributed to Benvenuto Cellini, and in design and technique is fully worthy of him, but in the absence of any written contemporary record, the attribution cannot be regarded as quite certain'.

The final paragraph of the auction catalogue text in 1931 is printed upper case:

'RARITY AND EXCELLENCE COMBINED ENTITLE THIS HISTORIC PIECE TO RANK AMONG THE SUPREME EXAMPLES OF RENAISSANCE JEWELLERY; AND IT MAY BE DOUBTED WHETHER AN EXAMPLE OF COMPARABLE QUALITY AND INTEREST NOWADAYS EXISTS IN PUBLIC OR PRIVATE OWNERSHIP ANYWHERE'.

Following enquiries made by Charles Oman after the auction, the V&A's registered description of the jewel on accession in 1931 states that there is no documentary evidence that the jewel was in the treasury at Delhi, 'but Canning was at Allahabad at the time when the treasure was being forwarded to Calcutta and selected a few trinkets for submission to Queen Victoria. It is not recognisable in the catalogue of the remainder of the treasure which was auctioned by Messrs. Hamilton & Sons at Calcutta (Information obtained from the Superintendent of the Records at the India Office and by inspection of the catalogue)'.

The jewel was illustrated in colour on the cover and as the frontispiece of An Introduction to Courtly Jewellery by Anna Somers Cocks (V&A, 1980). The caption described the jewel as 'Italian or South German c. 1560'.

Shirley Bury (Jewellery Gallery Summary Catalogue, V&A, 1982, page 154) states that the 'carved Indian rubies' were 'added when the jewel was in India. Various parts were re-backed, probably in India; the blister pearl [pendant] also a replacement'. 'The design probably FLEMISH, the execution ITALIAN: about 1570. Traditionally said to have been given by a Medici prince to a Moghul emperor.' 'Acquired in India by Charles John, 2nd Viscount Canning, Governor-general of India, 1856-62.'

The current assessment is that the jewel was made in the nineteenth century: see Hugh Tait, Catalogue of the Waddesdon Bequest in the British Museum: I. The Jewels, London, 1986, pages 169-170, and Volume III, 'The "Curiosities", London, 1991, page 294. In the latter reference, Tait describes the jewel as 'Origin uncertain and probably modern', noting that Clare Vincent (The Jack and Belle Linsky Collection in the Metropolitan Museum of Art, New York, 1984, pp. 196-8) had dated the Linsky mermaid as probably ca. 1860. Tait comments that 'Visually it [the jewel] appears to contain telling evidence, especially on the reverse, where, for example, the roll of hair above the neck is but one very puzzling feature. Furthermore, there is evidence that the goldsmith's work had been specifically made - not altered - to accommodate the large Indian carved oval ruby set in its enamelled scaly tail. The latter has always been regarded as a later addition, inserted while the pendant jewel was in India, and yet the design of the enamelling on the tail appears to incorporate it quite perfectly and the adjacent enamelling itself is also unaffected'.

'The Canning Jewel', pendant figure of a merman, baroque pearl mounted in enamelled gold, set with pearls, diamonds & rubies, probably made in Europe, about 1850-60.

Previously thought to be 16th century 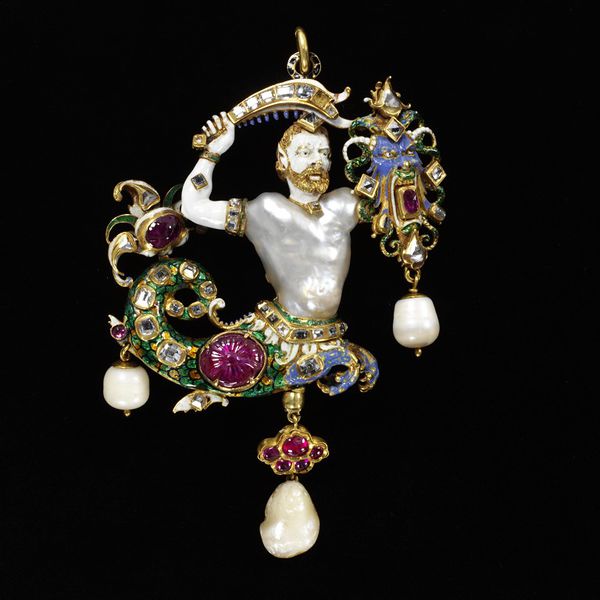