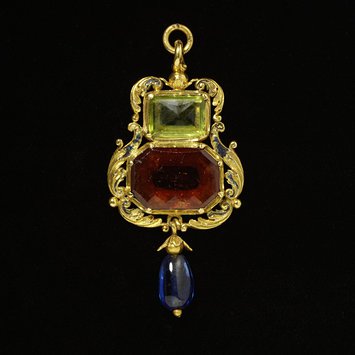 The settings of the stones on this pendant are open at the back. This allows direct contact with the wearer's skin. According to medieval and Renaissance beliefs, the magical properties of the stones could thus benefit the wearer. Renaisance pendants were often made as amulets to protect against danger. Here, the power of the amulet is heightened by an inscription to ward off epilepsy and an invocation to God, Jesus and Mary.

Prophylactic pendant, gold, with traces of enamel in black and translucent blue, set with a hessonite garnet and a peridot, and hung with a sapphire.

Enamelled gold, set with a hessonite garnet and a peridot, and hung with a sapphire

'ANNANISAPTA+DEI'
Textual information; back of the setting

'DETRAGRAMMATA IHS MARIA'
Textual information; back of the setting

The stones are set unbacked to allow their magical properties to reach the skin of the wearer.

The entry by Anna Somers Cocks in Princely Magnificence (see references) includes the following interpretaion of the inscriptions:
'ANNANISAPTA DEI is a very common invocation, frequently engraved on 15th century rings, for example, and it was generally believed to ward off epilepsy. DETRAGRAMMATA, a version of TETRAGRAMMATON, refers to the four letters with which the name of God, Jahweh, is written in Hebrew. IHS, the abbreviation of the name Jesus, and less often MARIA, were used with similar amuletic intention.'

The pendant, although resembling several drawings by Holbein, seems to have been a common type.

Prophylactic pendant, gold, enamelled and set with a hessonite garnet and a peridot, and hung with a sapphire, Britain, ca.1540-60. 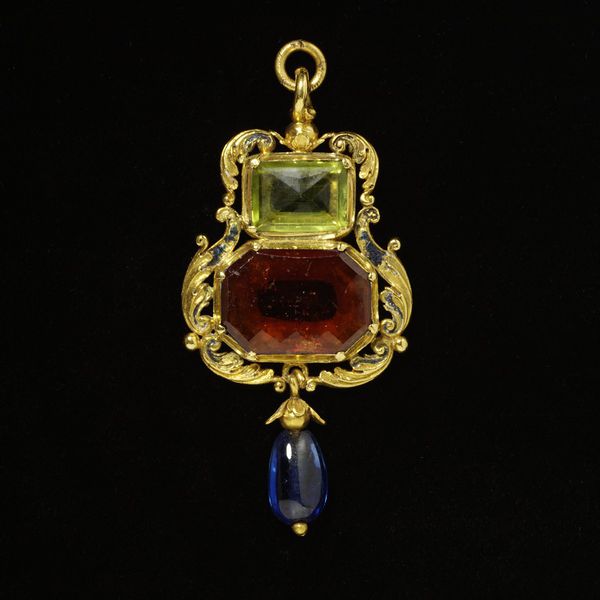