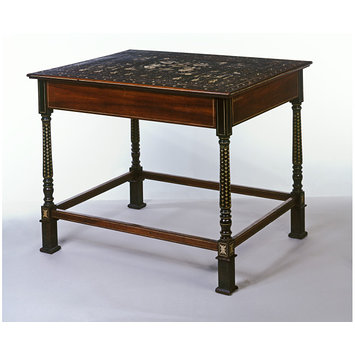 Altar frontal converted into a table

This Communion table is a rare surviving example of liturgical furniture made in India under Portuguese patronage in the early 17th century. The top is of hardwood inlaid with ivory and features a curious juxtaposition of Christian religious motifs with animals and figures depicted in a provincial Mughal style. The centre of the table is inlaid with an inscription, 'Lovvado sea Osantissimo Sacramento' (Portuguese for 'Blessed is the Holy Sacrament'). This indicates that this table was used for adminstering the sacrament of Communion. The table was formerly thought to have been made for the Jesuit chapel at Lahore in that part of the Punjab which today lies in Pakistan. Although it was undoubtedly made for a new church somewhere in Asia, there is no evidence to suggest which one.

Altar frontal , blackwood inlaid with ivory, decorated with a dominant Christian motif of angels adoring the sacraments with Indian designs as subsidiary motifs, converted into a table.

Indo-Portuguese. This has been identified as a re-used altar frontal by Nuno Vassallo e Silva (see eg Jay A. Levenson, ed., Encompassing the Globe. Portugal and the World in the 16th & 17th Centuries, Reference Catalogue, cat. 1.24, p. 122; also Ana de Castro-Henriques ed., 2009, Portugal and the World in the 16th and 17th centuries, cat. 122 pp 273-4, Museu Nacional de Arte Antiga, Lisboa, ) on the basis of the orientation of the design and a comparable altar frontal in the Armenian Museum of New Julfa in Isfahan.

"This table, with its decoration of Christian and Indo-Persian elements, is a rare surviving example of liturgical furniture made in India under Portuguese patronage in the early seventeenth century. The style of the ivory inlay and the character of much of the ornament conforms to a large group of cabinets made to European designs in western India from the mid-sixteenth century onwards. However, this is at present the only known table from this school, and one of a very few pieces of furniture with direct Christian imagery."
Amin Jaffer, Luxury Goods From India: the art of the Indian Cabinet-Maker, London : V&A, 2002, pp. 33-35, ill. ISBN: 1 85177 381 9.

Altar frontal, blackwood inlaid with ivory, Gujarat or Sindh, Indo-Portuguese, 1600-1610, with later legs to convert it into a table. 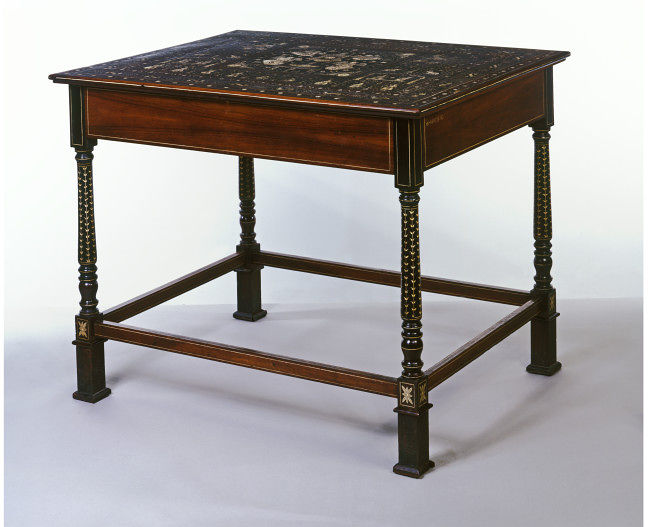