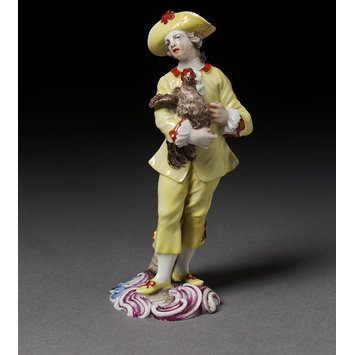 Figure in hard-paste porcelain painted with enamels of a boy holding a cockerel, after an original by Meissen Porcelain. The figure stands, with right foot forward, wearing a trimmed hat turned up, a coat, white shirt, stockings, breeches and shoes. On a shallow rococo scrollwork base picked out in crimson and blue, with a tree stump.

38. Figure of a boy holding a cockerel
circa 1765
hard-paste porcelain painted in colours
h 14,2 cm
no mark
inv. C.470-1921
gift: D.M. Currie
The figure of a boy holding a cockerel on a rococo base is derived from models produced at Meissen (ADAMS 2001, p. 117, plate 320) which were widely copied by many German factories, in particular by Ludwigsburg, in numerous variations (FLACH1997, p. 533-537, plate 220-262; for German influence at Doccia, see D’AGLIANO 2011, p. 128-145). In the 1960s, when casts were being made using the Antique moulds still stored at the Richard-Ginori factory in Sesto Fiorentino (BALLERI 2011, p. 40), this was one of the objects that was made (B-1029). It is very likely that this is one of the figures that was copied by Giuseppe Bruschi during his stay in Parma where he had gone to find new ideas for statues in porcelain (BIANCALANA 2011, p. 101- 102). Considering its derivation from Meissen it can probably be identified as the “Tedesco con un’Uccello in braccio” (German holding a bird), which is listed in the Inventory of Moulds (AGL, I, 2, f. 37, Fabbrica delle Porcellane di Doccia. Scritture e Documenti, fasc. 22, p. 20).The statuette was attributed to Capodimonte when it was given to the museum (on the problem of mistaken attributions of Doccia objects to Capodimonte, see MARITANO 2012, p. 14-17).
A.B.
Bibliography: DE EISNER EISENHOF 1925, plate V (attributed to Capodimonte); LANE 1954, plate C; LANE 1963, plate II 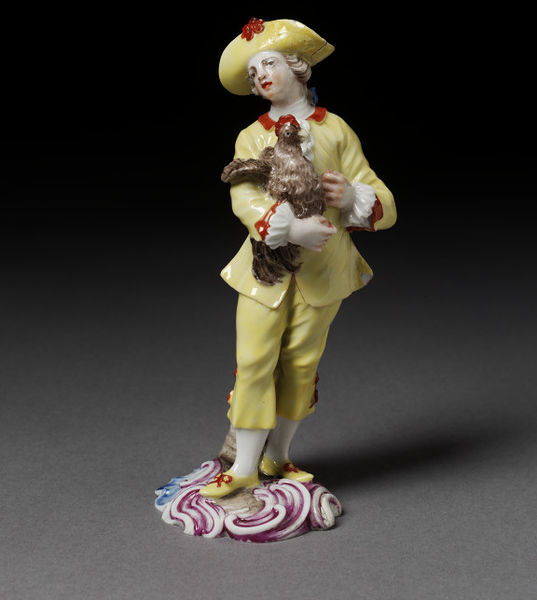