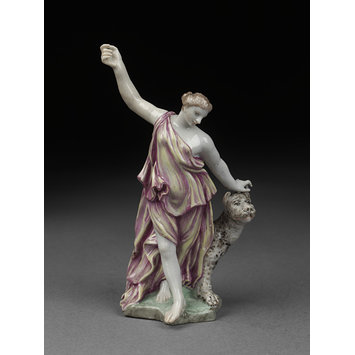 Figure group in hard-paste porcelain of Ariadne and a panther. She is dressed in streaky yellow and purple drapery. Her right hand is raised while her left rests on the head of the panther which stands behind her. Her right leg is thrust forward.

46. Figure of a Nymph with a panther
circa 1780-1790
porcelain painted in colours
h 16 cm
under the base a label “Laranagas(?)”
inv. C.150-1926
gift: Mrs W. Toynbee
Bibliography: MORAZZONI 1935, plate LXXVIII;
LANE 1954, plate 61, a (believed to be Capodimonte);
A.P. Darr, in DARR, BARNETT, BOSTRÖM
2002, p. 93-94, cat. 168 (not illustrated)
The Ginori factory could not remain indifferent to the passion for Classical Antiquity that was sweeping Europe in the 18th century. They began to produce objects that were directed in particular to travellers making the Grand Tour and who, in Italy, were the main clientele purchasing copies of classical antique statues of various sizes. The two statuettes shown here represent an example of this type of production. They are based on an ancient marble statue in the Uffizi Gallery in Florence representing A Nymph with a Panther (MANSUELLI 1958-1960, vol. I, p. 134-135, cat. 100 and fig. 102). Besides the difference in size, the statuettes are quite different from the archetype in the way they are modelled. The smaller of the two (cat. 46) is the most similar to the statue in the Uffizi, although the hairstyle has been simplified and there are differences in the draping of the clothing and the position of the head of the panther which, in the archetype, is turned toward the Nymph. The other group is different from the archetype mainly in the modelling of the face and the hairstyle, to which a crown of ivy has been added. This latter is an attribute that is typical of representations of the Bacchante and, in fact, in the 18th century the Uffizi statue had been identified as such by Anton Francesco Gori (GORI 1731-1762, vol. III, 174, plate LVI, Baccha). A porcelain version of a larger size Nymph at the Detroit Institute of Arts (inv. 1990.261), which is datable to the mid-18th century demonstrates that these statuettes were already being produced when the Doccia factory was under the direction of MarquisCarlo Ginori. This particular statuette is inspired by the marble statue in the Uffizi but in several ways, including the position of the head with the ivy garland, it is actually closer to a bronze statuette attributed to Massimiliano Soldani Benzi that appeared on the art market in 1998 (WENTWORTH1998, lot 52). We know that in 1706, for Prince Johann Adam I of Liechtenstein, Soldani made “twelve figures in bronze for a Cabinet; they were half a braccio high and some of them were nude while others were clothed and they were exact copies of the most Famous statues in our city […]”(LANKHEIT 1962, p. 337, n. 684, doc. cit. in AVERY 1976, p. 165). The Nymph with a Panther was probably one of these because casts of statues that at the time were in the Uffizi Gallery have been attributed to Soldani (AVERY 1976, p. 165-172). Although the dimensions of the bronze statuette and this statuette in porcelain (cat. 47) appear to be practically identical considering that porcelain shrinks about 16%during firing and the different position of the right arm of the Nymph, there are also several other differences like the folds on the himation on the side and along the right leg of the Nymph. This means that the moulds that were used to make the version in porcelain were not the same as those used to cast the bronze statuette. Among the biscuits that were produced during the Campana casting project (BALLERI 2011, p. 40) by modellers working at Doccia in the 1960s, there is a “chaste” version of the Nymph in which her left breast has been covered. This version corresponds to a terracotta model that is in the Museo di Doccia (inv. 1664) and which, on the basis of the modelling can be dated around 1780-1790. Since figures of about the same size were manufactured in two different versions in which the covering of the breast was the main variation, it is evident that this subject must have been a very popular one at Doccia. The smaller of the two porcelain statuettes (cat. 46) also exists in a “chaste” version and is derived from a figure created around 1780-1790, as is demonstrated by the terracotta model in the Museo di Doccia (inv. 1929). It is probably the one that is listed in the Inventory of Models (about 1791-1806): “N. 1 There are 14 statuettes, some from Florence and some from other places […] The Third one is The Bacchante […] and all of them are with their moulds (LANKHEIT 1982, p. 153, 76:1). This entry suggests the presence of a series of statuettes of presumably about the same size and based on subjects of Classical Antiquity; in fact, we know of four statuettes having these characteristics (MANNINI 1997, p. 62-63).One of these is probably the Farnese Hercules in the Victoria& Albert Museum(cat. 48). The large quantity and the small size of the statuettes suggest that they were used as elements in a table setting.
R.B. 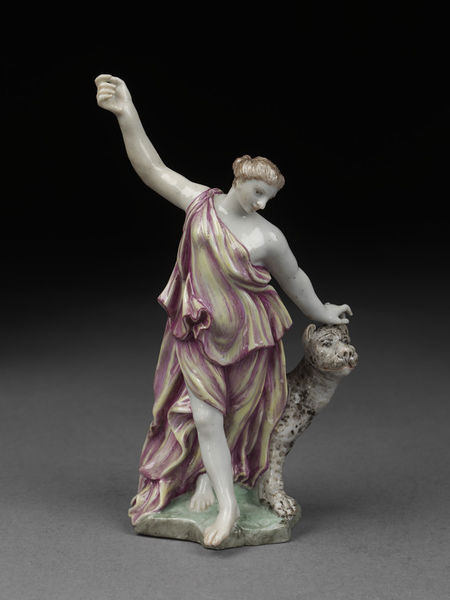