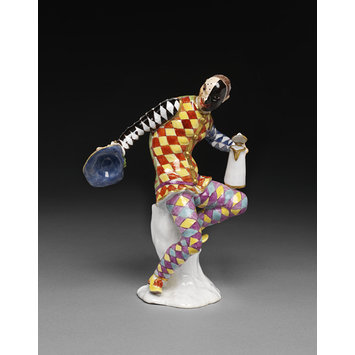 The Italian comic theatre, or Commedia dell'Arte, became all the rage in Europe in the 18th century thanks to the performances of Italian travelling troupes of actors. The cast of stock characters would have been familiar to everyone, the most notorious being the mischievous and outrageously hilarious servant Harlequin.

This superbly modelled harlequin is one of the great early small-scale works by the artist who largely defined the sculptural conventions of the eighteenth-century porcelain figure: Johann Joachim Kändler. Kändler, the greatest porcelain modeller of the century, had been recruited for the Meissen factory by Augustus the Strong to create models for his life-size porcelain menagerie at Dresden. After excelling at large-scale work, he turned his attention to small figures in the later 1730s, in doing so inventing the porcelain figure as we know it today. He went on to create or supervise the creation of about 1,000 models during his remarkably long career, including figures for collectors’ cabinets and interior decoration, but also for display at grand dinners.

From the late 1730s and into the 1740s Kändler produced a great variety of expressive figures based on the Commedia dell’Arte characters. Although this figure of Harlequin has the black half-mask typically associated with the character, Kändler often depicted him without any mask, adding exaggerated facial features, moustaches, black patches and warts instead. Like most of Kändler’s Italian Comedy models, this figure was a virtuoso cabinet piece for collectors. Kändler evidently keenly enjoyed the expressive grimaces and contorted poses of Italian Comedy actors, and evidently frequently attended theatre performances. Although Italian Comedy troupes scarcely played in Dresden after the turbulent and financially disastrous period of the Seven Years' War (1756-1763), Kändler continued to produce new Commedia models right up to shortly before his death in 1775, presumably in response to customers' demands.

Figure of Harlequin with a tankard, of hard-paste porcelain. Seated on a stump, left arm extended with an opened tankard which rests on raised left knee; in his extended right arm a broad-brimmed hat. Mask over face. Painted with enamel colours and gilded, the costume in diamond-pattern; the mask half flesh-colour, half black.

In the 2001 Stuttgart exhibition catalogue (see reference below), Ulrich Pietsch gives an account of the production of Italian comedy figures at Meissen . There is a short essay, translated by Sebastian Kuhn, in the English summary within the slip cover of the main catalogue from which the following information is taken.

Kändler was appointed as modeller in 1731 at the Meisen factory. His first Commedia figure was in 1736 and depicted Harlequin with the bagpipes and a dog at his feet. There followed many different variations on the different characters.

When considering any of Kändler's Commedia dell'Arte figures, the sculptor's delight in his subject matter is there to be seen in his expressive modelling, exaggerated poses, enhanced by the models' brilliant colouring:

'Invention and experience - derived from pictorial sources as well as from nature - are thus combined in an excellent and striking work of art. Ignoring the spirit of the Enlightenment, and the fact that the Italian Comedy was barely maintained in Saxony after the Seven Years War, Kändler continued to create new models of comedy figures until shortly before his death in 1775, apparently in response to lively demand. In spite of Johann Joachim Winckelmann's indignation at the 'vulgar taste of works in porcelain' which was mostly 'formed into ridiculous dolls', a greater part of courtly society adhered to the aesthetic conceptions of the late Baroque much later than has often been assumed, particularly in the area of the decorative arts.'

Figure of Harlequin with a tankard, hard-paste porcelain painted in enamels and gilded, modelled by J.J. Kändler, made by Meissen porcelain factory, Germany, 1738-1740.

Attribution from the manuscript catalogue dates from about 1970 and was compiled by William Hutton of the Toledo Museum of Art, Ohio.