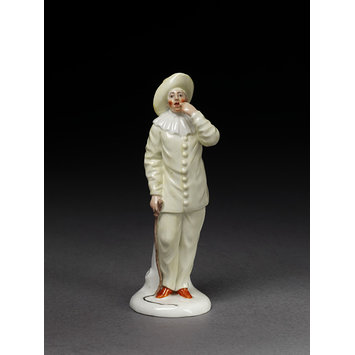 The Commedia dell’Arte, was a form of improvised street theatre, which spread from 16th-century Italy throughout Europe, and remained popular for around two centuries. Commedia dell'Arte troupes engaged in very physical acting using music, dance and acrobatics in their performances. While the plot was largely improvised, stock characters were used and were recognisable to the audience by their costumes, accents and poses. The popularity of this form of theatre inspired paintings and decorative objects depicting the commedia characters.

This figure of Pierrot is from a set of ten made at Kloster Veilsdorf in 1764. They were created by the factory's master modeller Wenzel Neu, following following engravings of designs by Johann Jacob Schubler published in Augsburg in 1729 (engraved by Johann Balthasar Probst). They may have been intended for display at grand dinners and set out down a table during the service of the dessert.

The factory at Kloster Veilsdorf was near Hildburghausen, the seat of the Dukes of Sachsen- Hildburghausen, in Thuringia, in present day northern Germany. It was founded in 1759, but did not achieve commercial production until 1763, when Nicholas Paul the younger brought his father's 'arcana' (knowledge of porcelain production) from the factory at Fürstenburg. Two years later the Kloster Veilsdorf factory received a privilige (patent) from the Duke of Sachsen Hildburghausen. Almost all the the eighteenth-century German porcelain factories were founded with princely or ducal support and many relied on such patronage for their continued survival.

Figure in hard-paste porcelain painted with enamels of Pierrot from Commedia dell'arte. He is clothed in a yellowish-green costume with a broad white collar and red shoes. He leans against a post, the right hand holds the handle of a whip, and his first finger of his left hand touches his lips.

The information below is from the essay by Sattler in the 2001 Stuttgart exhibition catalogue (see reference below).

Hildburghausen is the seat of the Dukes of Sachsen Hildburghausen and its ruler, Duke Carl (1727-1780) was fanatical about the theatre. Soon after he inherited the dukedom in 1745, he had converted the 'Ballspielhaus' in Hildburghausen into a theatre in 1750-55 and was a lavish patron of the arts. The Duke's younger brother, Prinz Friedrich Wilhelm Eugen von Sachsen-Hildburghausen (1730-95) had developed a keen interest in porcelain during a stay in Copenhagen and in 1759 leased the 'Kammergut' Closter Veilsdorf, a few kilometres from Hildburghausen in order to found a porcelain factory. Initially his workmen could only produce earthenwares, however it was only when Nicolaus Paul the younger arrived in 1763 who had been given the 'arcana' (secret of porcelain production) from his father at the Fürstenburg factory, that porcelain production started.

The Commedia dell'Arte figures are among the first produced by the factory. Wenzel Neu (ca. 1707-1774) had first visited Closter Veilsdorf in 1761. He was recorded at Volkstedt in 1762 and was 'Modellmeister' (chief designer) at Closter Veilsdorf from 1763- October 1767. Neu was born in Tragau, Bohemia in about 1707. He was probably trained in Prague by two sculptors; Braun and Maximilian Brockoff. In 1742 he was invited to become 'Modellmeister' at the faience factory in Fulda which had started one year previously. He worked there, creating the models for all their figures until the factory closed in 1761. During his time at Closter Veilsdorf he worked on at least 91 different models: 33 figures and groups, 11 animals, 7 busts or portrait reliefs, 2 snuffboxes, 1 sword-hilt, 3 cane handles, 2 sculptural pipe-heads, 5 mirrors, brush-heads, 12 pieces for a dinner service and 11 pieces for a tea and coffee service, 3 sweetmeat dishes and one objet de vertu. In addition he oversaw the models created by his apprentices. He subsequently returned to Fulda where he died on 21st May, 1774.

Neu created a series of 10 Commedia figures after the Augsburg engravings. 'Neu succeeded in transforming his graphical source into superb three-dimensional works of art. He hardly changed the appearance of certain figures (Scaramuza, Doictor Poloward, Pierrot and Arlequin), but adapted others (Gobiel, Capitaine Rodomond and Columbina). Only the appearance of Isabelle and, in particular Mezzeti were altered noticeably.' (Mezzetin is seated in the engraving). The series was produced over a long period of time and appears in the documents 12 years after Neu had left the factory. However, they were only produced to order, so it is impossible to say how many were made.

According to Meredith Chilton (see reference below), Molière was responsible for inventing the character of Pierrot. In his play, Dom Juan ou le festin de pierre, Pierrot appears as a simple character with a rustic accent. 'Molière appears to have adopted an existing character of the commedia dell'arte, Pedrolino, a young, personable and gullible servant who was both innocent and charming, but nonetheless comic, and transformed him into Pierrot.... Pierrot did not wear a mask, but floured or powdered his face white. The choice of white as the colour for Pierrot is interesting, as it was usually used for ghosts or phantoms in French ballets of the seventeenth century, though it was also the ancient colour of mourning. Perhaps this association served to show Pierrot as a character who was at once unworldly and filled with melancholy.'
Chilton suggests (p. 151) that Pierrot's gesture of pointing to his mouth may be to indicate his muteness.

Jansen, Reinhard, ed. Commedia Dell'Arte, Fest der Komödianten, Keramische Kostbarkeiten aus den Museen der Welt Stuttgart: Arnoldsche, 2001. For an essay by Ralf-Jürgen Sattler on Commedia dell'Arte figures by Thuringian factories see pp. 207-209, and in the English summary within the slip case translated by Angela Gräfin von Wallwitz, pp. 30-33. See also the folder of source prints for the Commedia dell'Arte within the slip case for the print by Probst, cat. no. 81, p. 23 where Pierrot stands in the same pose as this figure, next to Harlequin on the far right of the 'stage'.
Chilton, Meredith. Harlequin Unmasked: The George R. Gardiner Museum of Ceramic Art with Yale University Press, New Haven and London, 2001. ISBN 0300090099. Publication on the occasion of the exhibition, includes exhibition catalogue. An example of this figure is cat. no. 63, p. 290. For an account of the Commedia character of Pierrot, see pp. 100-102. The Gardiner Museum has 8 of the 10 Neu models in the Commedia series. 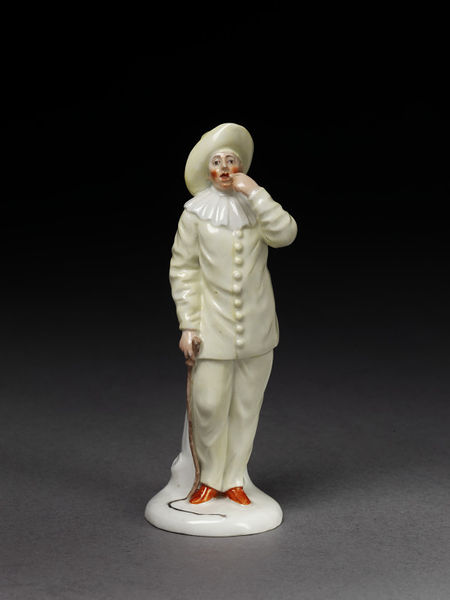