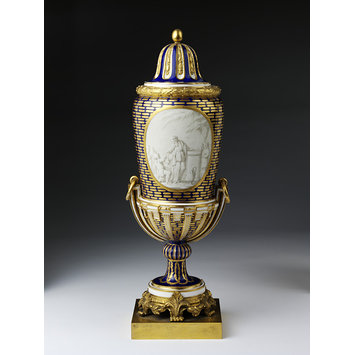 In the eighteenth century, vases were often displayed on furniture or chimney-pieces, usually in front of a mirror. Rosalind Savill, in her catalogue of the Wallace Collection Sèvres porcelain states in her introduction that Louis XVI's inventory of porcelain at Versailles shows Sèvres in most rooms, including sets of vases, or garnitures, as they were known. This model is known from 1769 with several variations in the shape of the handles, foot and lower part of the vase. This type of decoration resembling cameos carved in low relief is known as grisaille. It is typical of neo-classical style decoration on vases and other items of the 1770s. It may have been developed by the head of the painters' workshop, Jean-Baptiste-Etienne Genest who is recorded painting vases and other items with this decoration from 1769. Unfortunately his work cannot be identified for certain as, being the workshop head, he wasn't required to use a mark as was usual for other painters. From the mid 1760s onwards, the plain ground colours of the 1750s are often enriched with gilded patterns. This gilded pattern is particularly rich and was described as 'briques d'or' in the factory records.

This pair of vases was among eighty-nine pieces of Sèvres porcelain bequeathed with a collection especially rich in eighteenth-century French decorative art by John Jones in 1882. As the handbook to the Jones Collection stated in 1883: "Suddenly ... a collection has been given ... which contains the very objects so much to be desired, and, as it seemed a year ago, so hopeless of attainment." A military tailor who made his fortune during the Crimean War, Jones (1799-1882) started collecting seriously in the 1850s, sharing a taste for luxury objects of the ancien regime with aristocratic collectors such as the fourth marquess of Hertford and Sir Richard Wallace (founders of London's Wallace Collection), John Bowes, and Baron Ferdinand de Rothschild. William King, in his catalogue of the Jones Collection (see below) of 1924 relates that these vases were formerly in another famous collection, that of Ralph Bernal ( 1783-1854). Bernal was a politician who had a long parliamentary career from 1818-1852. His private fortune, derived from estates in the West Indies inherited in 1810, allowed him to buy exquisite works of art, particularly silver, glass, ceramics and miniatures. Following his death, the auctioneers Christie and Manson held a series of sales in 1855 of 4,294 lots, 730 of which were acquired for the Museum of Manufactures at Marlborough House. (This collection later became the Victoria and Albert Museum). A contemporary account of the sale by Henry Bohn reported that these vases were sold for £700 to a Mr. S. H. Sutherland; Jones had to purchase them from him 'for a considerably larger sum'.

King, William. Catalogue of the Jones Collection, II, Ceramics, ormolu, goldsmiths' work, enamels, sculpture, tapestry, books, and prints. Victoria and Albert Museum: 1924. 20 p., no. 149, ill. plate 24.
Henry G. Bohn. A Guide to the Knowledge of Pottery, Porcelain and Other Objects of Vertu, comprising an Illustrated Catalogue of the Bernal Collection of Works of Art London: Bell & Daldy, 1872. 749A/2-1882 with the female figure at the altar is illustrated, p. 44. The pair of vases was lot 598 in the Ralph Bernal sale, London, Christie & Manson, March & April, 1855. 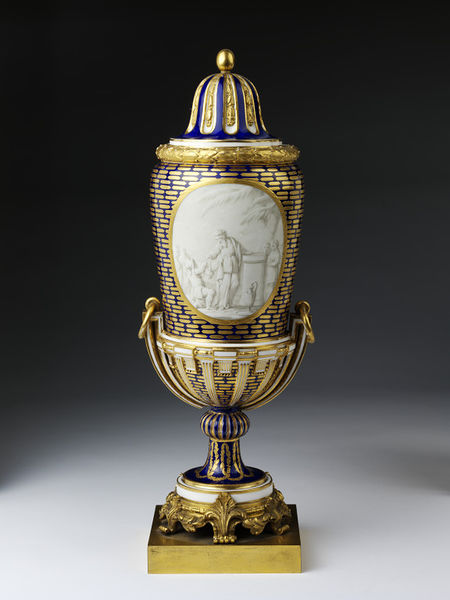