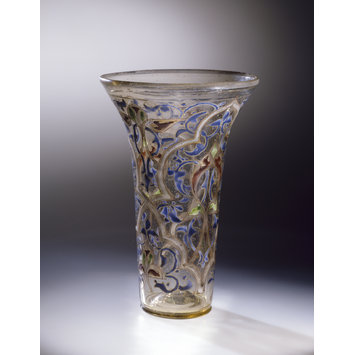 This glass beaker is known as the ‘Luck of Edenhall’. It was made in Egypt or Syria in the middle of the 14th century, and is elegantly decorated with blue, green, red and white enamel colours and with gilding. But its name reflects its later history, when magical powers were attributed to it.

By the 15th century, the beaker had reached England, where it was evidently considered an item of great value, as it was provided with a finely decorated leather case. This bears the IHS symbol on the cover; this is an abbreviation of the Latin phrase Iesus Hominum Salvator, meaning, ‘Jesus, Saviour of Mankind’. It has been suggested that this Christian religious symbol was placed there as a charm, to protect the beaker from damage.

The beaker had already acquired its nickname, the Luck of Edenhall, by the 1670s. In 1677 it was recorded in the will of Sir Philip Musgrave, the owner of a house called Edenhall in Cumbria, in the north of England. But it may date from much earlier.

In northern England, the term 'luck' was sometimes given to fine vessels that were thought to have a talismanic role: as luxury objects, they were owned by people blessed by wealth, and good fortune, and if they were broken, this good fortune would be lost. The Luck of Edenhall was thought to play this role for the Musgrave family of Edenhall. The need for the IHS charm on the cover was therefore all the greater.

In the 18th century local antiquarians took an interest in the Luck of Edenhall, and they recorded (or invented) a legend that explained the presence of this exotic and beautiful object at Edenhall. According to this legend, ‘a party of Fairies were drinking and making merry round a well near the Hall, called St Cuthbert’s well; but being interrupted by the intrusion of some curious people, they were frightened, and made a hasty retreat, and left the cup in question: one of the last screaming out,

If this cup should break or fall
Farewell the Luck of Edenhall.’

The Rev. William Mounsey of Bottesford, author of this passage in the Gentleman’s Magazine of August 1791 speculates that ‘ancient superstition may have contributed not a little to its preservation’.

This superstition, fortunately, continued to exert its influence. The American poet Henry Wadsworth Longfellow, in his mid 19th-century translation of Johan Ludwig Uhland’s ballad about the ‘Luck’, envisages the terrible consequences of its careless destruction during a banquet at Edenhall:

As the goblet ringing flies apart
Suddenly cracks the vaulted hall;
And through the rift the wild flames start;
The guests in dust are scattered all,
With the breaking Luck of Edenhall!

In storms the foe with fore and sword;
He in the night had scaled the wall,
Slain by the sword lies the youthful Lord,
But holds in his hand the crystal tall,
The shattered luck of Edenhall.

Fortunately the ‘Luck’ remains intact, though Edenhall itself was demolished shortly after the glass was placed on loan at the V&A in 1926.

This beaker was made in Egypt or Syria in the mid-14th century. It ended up in a house in the north of England known as Edenhall, and a legend arose that the fortune of the house was bound up with the well-being of this beaker - hence the popular name 'Luck of Edenhall'. Shortly after the Luck was placed on loan to the V&A in 1926, Edenhall was demolished.

The 'Luck of Edenhall', a mediaeval luxury Syrian glass, was provided with a protective leather case made probably in France in the 14th century. The glass may well have been acquired when new by a Crusader in the Holy Land, and may well have been in the possession of the Musgrave family of Edenhall, Cumberland, in the North of England, for many centuries. The glass is certainly recorded in the 18th century, when it had acquired its name. The family myth records that the glass was left near St Cuthbert's well by a party of Fairies whose merry-making was disturbed. As they fled, one cried out: 'If This Cup should break or fall, Farewell the luck of Edenhall!' []
Goblet about 1350
Syria or Egypt, glass with enamelled and gilded decoration 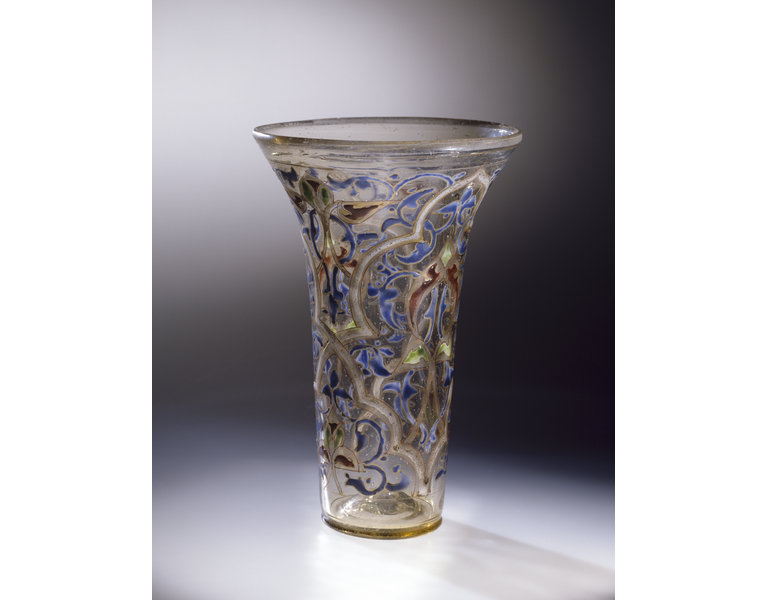