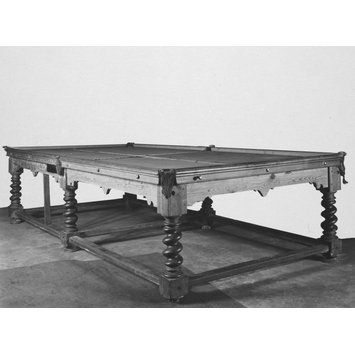 In 2017 the component parts were checked. Elements missing at this time: two sections of pinewood apron rail; metal fittings and nets for six pockets, cloth for the bed; metal bolts for assembly. Each end support consists of two legs joined by an oak stretcher and pinewood apron; one of the two has an ill-matched additional oak rail nailed, apparently as a brace. Each of the two central legs is cut at its top with a large mortice to receive the central, transverse support, and a bridle joint (with peg holes) to receive the ends of two sections of apron, and at its bottom on each side with twin deep mortices (and peg holes) for the stretchers. Each corner leg is cut at the bottom with twin shallow mortices (and peg holes) for the stretcher. Each leg has a rough chamfer at its top to accomodate the pocket. Each leg has a bolt hole at its top and bottom (apparently a modification to reinforce the mortice and tenon joint), and no bolts are visible in the Museum photograph of the table assembled c1920. Of the two sections of apron from the long sides of the table, a section has been cut out from two of them (one is visible in the photograph c1920). The bed consists of four flat boards of complex construction to prevent warping (see below), each with cut outs for the pockets. The boards are supported on the table legs and five transverse softwood rails which twin-tenon into the aprons, or the central legs (a single tenon) in the case of the heavy centre support. Shims were used to level the boards forming the bed. The present mahogany cushion rails (x6) were bolted into the edges of the bed, three bolts per section (visible in the photo c1920). It seems likely that the four beds were pegged together rather than a single large board subsequently cut into four.

Boards of the bed- suggested method of construction
Each section of the flat bed consists of an outer framework (the short sides possibly glued in place) with two muntins forming three sections which each contain five floating 'panels' (loosely held by tongue and groove). The floating panels are retained in place by means of three tapering battens on both sides of the board (tapering upwards on one side, downwards on the opposite side), which lock in place by means of their dovetailed profile and multiple pegs (some in square holes) that run right through the thickness of the board. Two lateral battens run the full width of the board, including the top and bottom rails, while the central batten stops short of the rails.

Letter from Sir John Wood to the Museum director Sir Cecil Smith, 4/2/1920
"In December last a sale of furniture and effects took place at an old house near here named Rushbrooke. There was I knew in this house an almost unique example of a Charles II billiard table, and some years ago I obtained permission to have this copied, as far as possible to comply with modern conditions, for a new table which I was having made for my residence here. At the sale I was fortunate enough to purchase this old billiard table. It has the twisted Jacobean leg and the flat rail and a beautifully made wooden bed. The only modern thing about it is a set of cushions, though these are probably 100 years old. It would be a great pity to destroy the character of this table and use the legs for something else, but at the same time as it is a full sized table practically it takes up a considerable amount of room. It is simply a curiosity and ought to be in a museum. I will present it to the Victoria & Albert Museum if the Council care to have it."
In 2017 the replica table was no longer extant at Hengrave Hall (pers. comm. 10/12/17)) 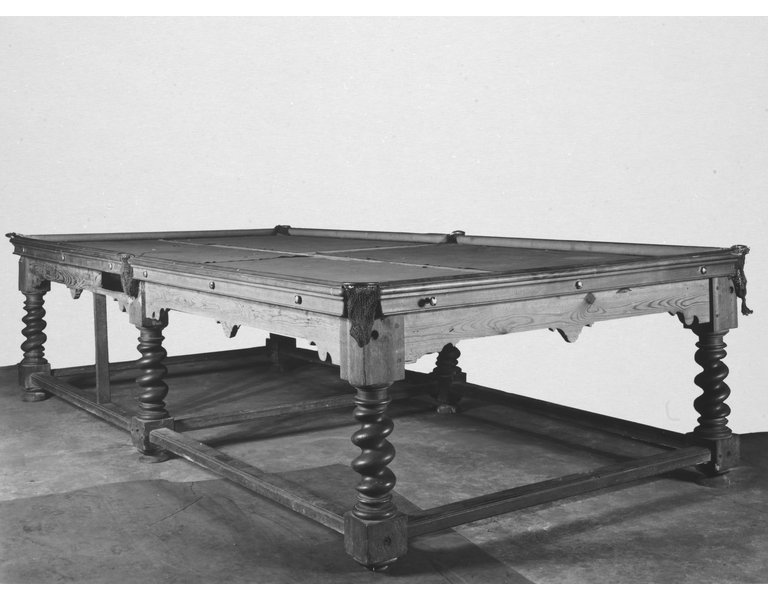