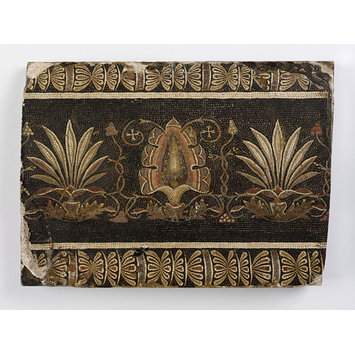 This fragment was originally part of the border of one of the most fascinating and famous ancient mosaics, the so-called Doves of Pliny. It depicts four doves perched on the edge of a metal bowl filled with water. The reflection of the doves can be seen on the surface of the water. The subject demands the highest skills of the mosaicist to show the different materials - metal, water, feathers - and reflections in an illusionist way, taking the technique to its very limits. The motif was first invented by the Hellenistic mosaic artist Sosos of Pergamon (active 2nd century BC). Natural historian Pliny the Elder (25-79) described it in his The Natural History as an example of perfect illusionism in the art of mosaics.

The fragment at the V&A was taken from the outer border of the Doves of Pliny mosaic discovered near Hadrian's Villa in Tivoli in 1737. The central panel is now in the Capitoline Museums in Rome. In the 18th century the outer border was cut into several small panels of similar size and used as diplomatic gifts. The V&A fragment exemplifies the illusionist effect with its naturalistically depicted floral motifs and two rows of beads.

The fragment at the V&A was taken from the Doves of Pliny mosaic that was discovered near Hadrian's Villa in Tivoli by Monsignor Giuseppe Alessandro Furietti (1685-1764) on 19 April 1737. Shortly afterwards it was lifted from the ground. This process was facilitated by the fact that the mosaic was mounted on a stone slab as so-called emblema, a very fine picture-like pavement mosaic. This might suggest that the mosaic was transferred to Hadrian's villa in the early 2nd century AD, but not made for it.

There is ongoing debate among scholars about the date and place of origin of the Doves of Pliny from Hadrian's villa. The majority maintains nowadays that it is not a Roman copy, but a Hellenistic work contemporary to Sosos's mosaic, possibly even the original.
Analysis in September 2010 (Dr Cristina Boschetti, University of Nottingham) revealed that the V&A fragment comprises tesserae (the small cubes of which mosaics are made) of different materials: apart from stone, also glass and faïence pieces were used. This range of materials is unusual for mosaics from Hadrian's time as is the minuscule size of the tesserae. Comparable mosaics in terms of material, style and quality were made in Hellenistic Pergamon.

The central figural mosaic was in the collection of Pope Clement XIII (1693-1769) and is now in the Capitoline Museums in Rome (Musei Capitolini, MC402). The outer border was divided into panels of similar size, each comprising three floral elements. These were presented as diplomatic gifts to important rulers of the period, among them Louis XV of France (1710-1774) and Augustus the Strong (1670-1733). Six fragments survive in European collections, including in The Hague, Dresden, Paris and in the V&A.

The mosaic entered the V&A in 1857, shortly after the foundation of the museum, when ancient mosaics were collected to inspire contemporary artists and craftsmen. It was stolen in the second half of the 20th century. It was discovered in a Berlin collection in the 1990s and returned to the V&A.

Historical significance: The Doves of Pliny fragment is part of a mosaic composition that has been famous for more than two millennia, and has been frequently copied from the Hellenistic period onwards. The virtuosity of its creation and the use of glass tesserae are very similar to Roman micromosaics dating from the late 18th century onwards. It is very likely that the Doves of Pliny inspired the promotion and development of this technique. The subject of the central panel was and is frequently reproduced in micromosaics. The Gilbert Collection on loan to the V&A comprises several examples which are displayed alongside the fragment in the Rosalinde & Arthur Gilbert Galleries at the V&A.

The Doves of Pliny is one of the most celebrated ancient mosaics. The subject, doves reflected in water, was described Pliny in the 1st century AD as an example of perfect illusionism. The panel was discovered in Hadrian's Villa in 1737 and its border divided up as diplomatic gifts. The tesserae (small cubes) are surprisingly minute for an ancient mosaic and they inspired modern micromosaics.

The Doves of Pliny mosaic was found at Hadrian's villa on 19 April 1737 but it is currently debated whether it dates to Hadrian's time. Style, material and quality suggest that the mosaic might be a Hellenistic piece, possibly from Pergamon. 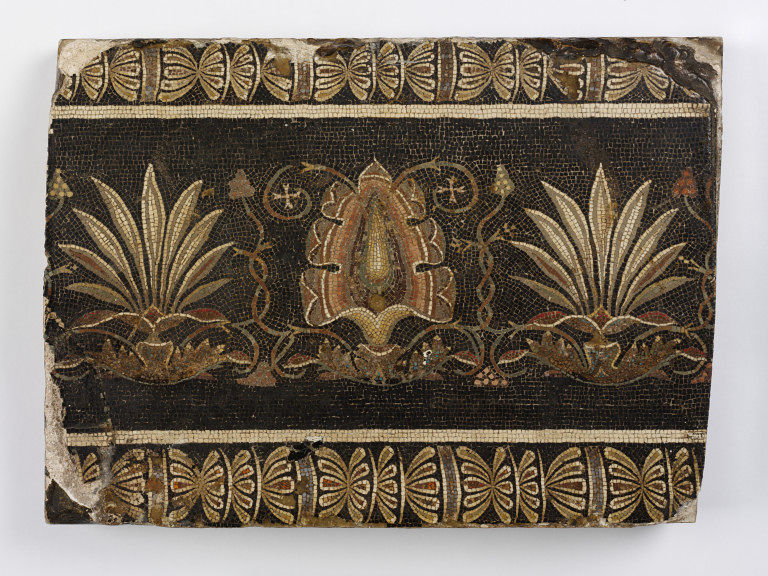