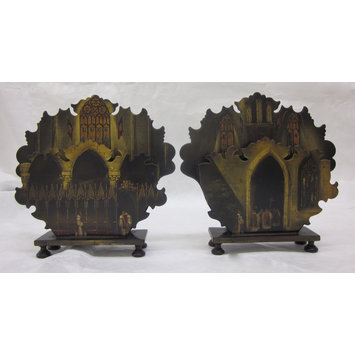 Small domestic objects made of papier-mâché were very popular in the period 1840-1860. Manufacturers in the West Midlands, like Jennens & Bettridge whose name is painted and stamped on these letter racks, were highly inventive in their technical innovations. Their products made wholly or part of papier-mâché ranged from large pieces of furniture, like beds or settees, to trays, fans, card cases, crumb trays, and containers for stationery. Often skilled artists were employed to decorate pieces with a wide range of subjects, including landscapes, medieval buildings or naturalistic floral sprays. The slightly incongruous combination of outlandish flower or leaf shapes for the panels, and ecclesiastical themes, for the decoration, on these letter racks was typical of many papier-mâché pieces and reflected contemporary interest in the Gothic Revival as well as in botany.

Papier-mâché, japanned and painted, paper racks decorated in the Gothic taste with portions of a church seen in perspective. One shows a procession passing through a doorway with an organ case, and the other shows a sedilia and arches backed by a large window with banners.

Jennens & Bettridge (designed and made)

This pair of letter racks are examples of the popularity of small domestic objects made of papier-mâché.They are inscribed and stamped with the name of Jennens & Bettridge, one of the largest manufacturers of papier-mâché in the West Midlands. The firm, originally established in Birmingham by 1815, had premises in 3 Halkin Street West, London, from 1837. Although these letter racks are stamped London it is possible that they were actually made in the firm's Birmingham factory for sale in their London retail premises.

Pair of letter racks in papier-mâché, painted and japanned, made by Jennens & Bettridge. English, 1840-60. 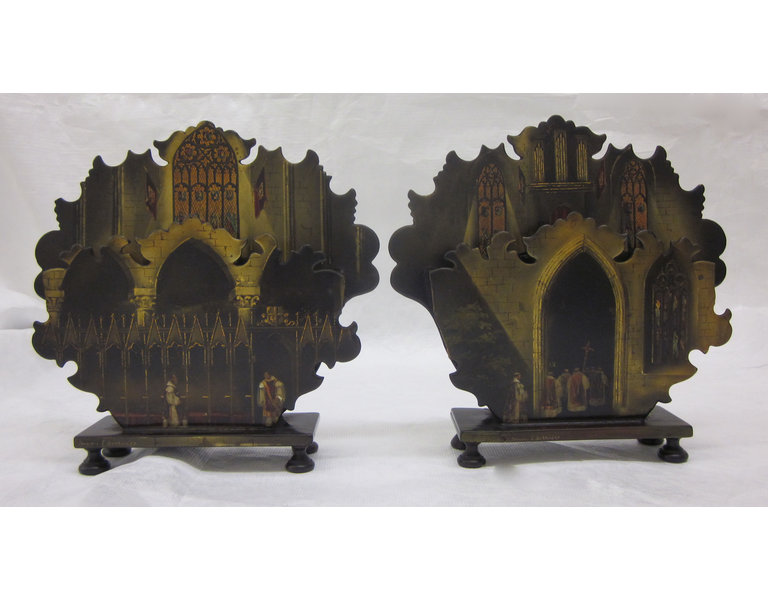