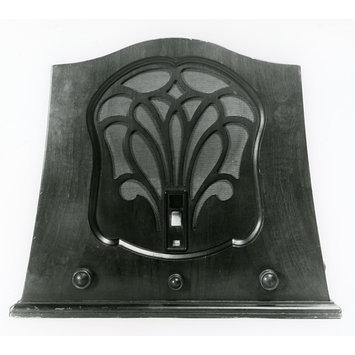 When domestic wireless sets became more widely available in the mid-to-late-1920s, they were initially seen as a new form of furniture. Sometimes they were concealed inside cabinets but more often, for middle-class buyers, radios were made which related stylistically to existing home interiors. By 1931, plastic (usually Bakelite) radio cabinets were just beginning to become popular. However, this wooden Art Nouveau-inflected Marconiphone set would have been more typical, revealing the British public's more conservative domestic tastes.

Mains wireless receiver. Large upright veneered wooden 'tombstone'-style cabinet, with sides sloping in towards the top; both sides are slightly concave. The top of the cabinet curves upwards to a convex curve at its centre. The front of the cabinet has a large symmetrical curvilinear cutaway, behind which is mounted a large wooden panel with a bold, organic, symmetrical fretwork design. This panel in turn is covered from behind with a gold covered fabric. At the centre base of this panel is a narrow vertical rectangular brown plastic insert incorporating a small tuning scale. The the front bottom edge of the cabinet are three wooden control knobs in a line. There is an additional, similar control knob, set into a plastic recess, on the right hand side of the cabinet near its base.

On entry to the Museum, the condition of this radio was noted as 'fair; some scratching'

Marconiphone started life in 1922 as a branch of the Marconi Company, manufacturing for the domestic market. The company was bought in 1929 by the Gramophone Company (later EMI), who purchased the right to use the Marconiphone name and trademark ‘G. Marconi’ signature.

This conservative model with its Marconiphone grille was conceived as furniture for the living room of a middle-income family. It contrasts with many of the 'Moderne' cabinets of the period.
[1992] 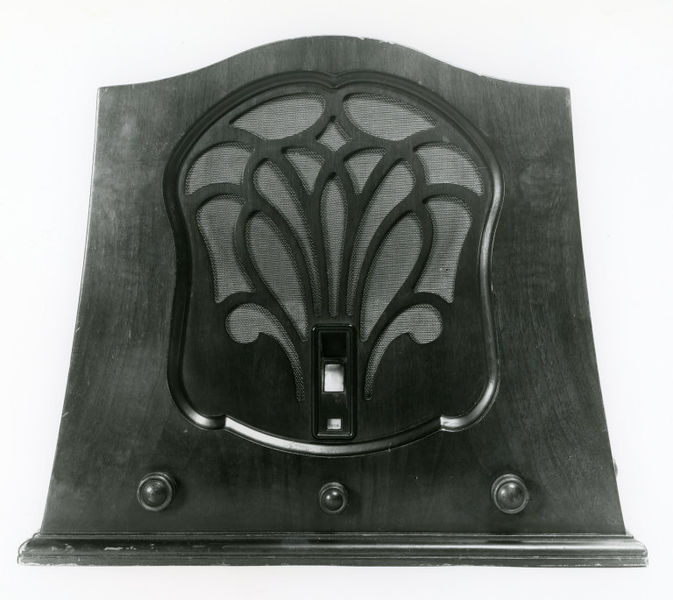