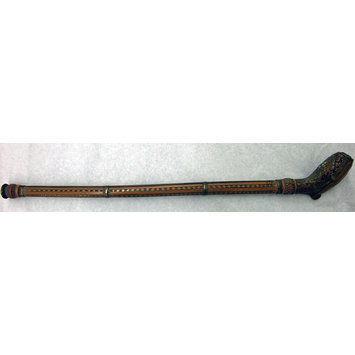 This case would have contained a long pipe with a straight stem; an updated version of the type made famous in the paintings of many Dutch masters of the seventeenth-century (for a good example see Jan Steen’s As the Old Sing So Pipe the Young (1668-70). These tended to be smoked at home or at an inn, although cases like this one prove that they were also smoked while travelling. Long pipes considered more desirable as they could hold more tobacco, and because they allowed the smoke to cool before it was inhaled; they were, however, more fragile and unwieldly.

This particular pipe case boasts extensive engraved brass metalwork, including two crowned double-headed eagles. These eagles feature as part of the heraldic badge of the Habsburg family, who later became the imperial family of Austria. Double-headed eagles also formed part of the heraldry of the Holy Roman Empire and the Russian Empire, where they represented the union of church and state.

Design:
Pipe case of carved birch with brass mounts. The case consists of a compartment for the pipe bowl, which can be opened, allowing the pipe to be inserted; a stem section; a small-gauge metal tube; a ventilation hole at the mouthpiece end.

The endpiece is a bulb carved with a symmetrical geometric pattern, and there is a multi-leaved brass mount wrapped over it. The decoration on the stem section runs longitudinally in five strips along the length of the stem section, and is separated by four brass bands wrapped around its circumference. The decoration consists of a symmetrical semi-circular pattern enclosed by flattened, twisted brass ‘ropes’ which are inlaid into the body. The lowermost panel has a pattern of symmetrical triangles.

The stem section ends at the bowl compartment with a bulb, matching the endpiece. There is a crown-shaped engraved brass mount on top of this bulb where the tube which runs along the length of the stem section terminates. Immediately below the bulb is a carved decoration of triangles, facing inward, in four sets, two on either side of the tube, which give the impression of a saltire or Cross of St. Andrew.

The bowl is decorated with many brass mounts, all of which are engraved. On the front there is a large, double-headed eagle wearing three crowns; two smaller ones on either head, and a large one located above these, spanning both heads. Around the eagle are six smaller mounts, and beneath each foot is another crown, wrapping round to the underside of the stem section. The lid and main body are separated by two brass strips, one either side, which terminate at the hinge plate.

Upon the lid is another double-headed eagle, flanked by eight inlaid, flattened brass ‘ropes’. The brass hinge plate is decorated with engraved birds and a date: 1739.

The inside of the case is undecorated.

Construction:
The case is made from two pieces of birch: a lid and a main body. Numerous brass mounts are attached to the object with small tacks. On top is a brass hinge plate, nailed with six tacks to the lid and main body, with three tacks used apiece. The part of the case in which the stem of the pipe would have resided would probably have been bored using a heated metal rod.

There is a metal tube which runs along the upper side of the stem section, held in place by brass bands. It is open at one end with its aperture above that of the ventilation hole.

The lid is held closed by a brass spring-plate, attached with two brass tacks to the main body, which h0oks into a carved-out square hole in the spur of the lid.

Condition:
A small 2cm section of brass ‘rope’ is missing about a third of the way up the stem. Both strip mounts on either side of the bowl compartment are slightly lifted at their middles. It is more pronounced on the proper right side.

Clay tobacco pipes are fragile so cases such as this one were used to ensure they would remain intact when carried outside by their owners. Long clay pipes with straight stems (known as ‘Aldermen’) were introduced by the Dutch ca.1700 – these could hold more tobacco and also help to cool the smoke as it passed down the stem.

Post-1690 a spur on the pipe’s ‘heel’ developed which made them easier to hold as one could do so without the risk of burning one’s fingers. For long pipes, this also meant it could be rested on a table without leaving a burn mark. Long pipes were generally smoked in the home, or at an inn, as they were more unwieldly. The hinged lid tended to be favoured after this date as a sliding closure would catch on the spur.

Some pipe cases were made with an internal or separate wire or rod which would help to keep the pipe clear of debris. The tube in which this rod would have been kept is present in this pipe case.

Most eighteenth-century pipes featured an opening at the end of the stem section, possibly to, in the words of W. Sanders Fiske, ‘keep the pipe sweet and clean’.