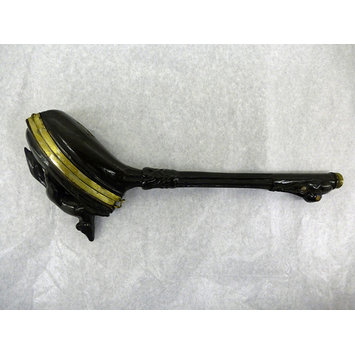 Smoking leaf tobacco in clay pipes became established in all parts of Europe during the course of the 17th century, following its introduction from Mexico by Francesco Fernandez in 1558. It was consumed as a fashionable and healthy substance by adult men and women, but its relatively high cost meant that its use was generally restricted to the mercantile classes and above. The fragile clay pipes used to smoke tobacco were also initially quite expensive, and were sometimes highly decorated, so protective wooden pipe cases were developed to contain them.

There is some debate concerning who introduced tobacco to Britain, though it is traditionally said to have been Sir Walter Raleigh, who remained a committed pipe-smoker up to moment of his execution in 1619. This particular case has been coated with a black enamel to give it the appearance of ebony. The good quality of the carving suggests a wealthy patron.

Design:
Pipe case of carved ebonised wood with brass fixtures. The case consists of a compartment for the pipe bowl, which can be opened, allowing the pipe to be inserted; a stem section; a ventilation hole at the mouthpiece end.

The endpiece is decorated with a brass ring wrapped over it. On the underside is a pendant carved in full relief of fruit and leaves.

The carved fluting on the stem section splays outward slightly upon reaching the bowl compartment, where it terminates. There is an ornamental boss around five-sixths of the way along the stem, toward the bowl.

Upon the bowl compartment, on the main body, is an escutcheon-shaped indentation, presumably for a now-missing mount. There are brass bands at the edge where the main body meets the lid, and the hinge is inclusive of these.

Upon the lid is a fox, carved in full relief, facing downward.

Construction:
The case is made from two pieces of ebonised wood: a lid and a main body. The brass features are mounted with small brass tacks. The part of the case in which the stem of the pipe would have resided would probably have been bored using a heated metal rod.

The lid is held shut by a brass snap closure.

Condition:
Parts of the case are fairly worn, especially on the carving. Some leaves on the pendant have been rubbed revealing the original colour of the wood.

This pipe case appears to be missing an escutcheon which would most likely have carried the owner's coat of arms. It was common at this time to decorate personal possessions, even small items such as this, with family badges or arms.

Clay tobacco pipes are fragile, so cases such as this one were used to ensure they would remain intact when carried outside by their owners. Sir Walter Raleigh, a very active smoker, is known to have had a leather pipe case.

Post-1690 a spur on the pipe’s ‘heel’ developed which made them easier to hold as one could do so without the risk of burning one’s fingers. For long pipes, this also meant it could be rested on a table without leaving a burn mark. The hinged lid tended to be favoured after this date as a sliding closure would catch on the spur. The pronounced forward-lean of this pipe case probably indicates an origin of before 1700, as after this date most English pipes tended to be made with the bowl parallel to the stem. The exceptionally large bowl may also suggest a late-century origin.

Most eighteenth-century pipes featured an opening at the end of the stem section, possibly to, in the words of W. Sanders Fiske, ‘keep the pipe sweet and clean’.

It is not known who introduced tobacco to Britain; various candidates include Sir Walter Raleigh, Sir Francis Drake, John Hawkins and Ralph Lane. What is known is that it came to Britain as early as 1565, as written by William Harrison in his Great English Chronologie.

James I was an early activist against smoking and raised duty on it from 2d to 6s 10d per pound. He also wrote in 1603 The Counterblaste to Tobacco, in which he said: ‘what honour or policie can move us to imitate the barbarous and beastly manners of the wilde, godlesse, and slavish Indians, especially in so vile and stinking a custom?’ Despite this, tobacco was received in great quantity from Virginia, and by 1614 there were over 7000 shops selling tobacco in London alone. The popularity of smoking tobacco further increased after the plague of 1665, as it was thought to have cleansing properties. A French visitor of ca. 1670 even remarked that smoking had become so embedded in English customs that children were taught how to smoke at school by their masters. 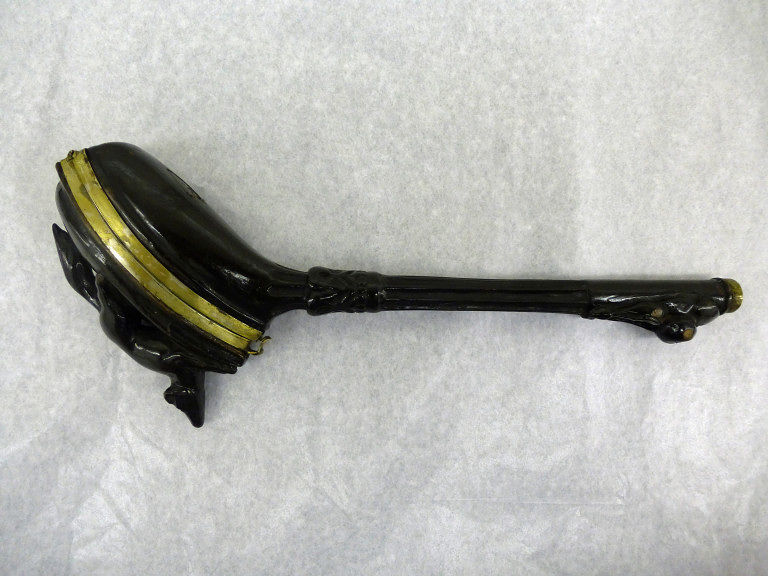