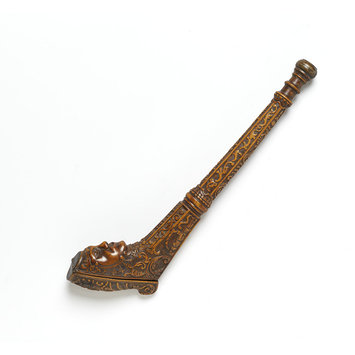 This case would have contained a relatively short pipe which could have been easily carried outdoors inside a pocket. Long pipes, of the type made famous in the paintings of many Dutch masters of the seventeenth-century (for a good example see Jan Steen’s As the Old Sing So Pipe the Young (1668-70), tended to be smoked at home or at an inn. These were considered more desirable as they could hold more tobacco, and because they allowed the smoke to cool before it was inhaled, although they were more fragile and unwieldly.

The small figures located either side of the upper-part of the bowl probably represent a generic European depiction of the inhabitants of the Ottoman Empire, as shown by their scimitars, serpents and exotic headwear. Turkey was at this time closely connected with the consumption of tobacco.

Design:
Pipe case of walnut, carved in low-relief, with turned endpiece. The case consists of a compartment for the pipe bowl, which can be opened, allowing the pipe to be inserted; a stem section; a ventilation hole at the mouthpiece end.

The stem is divided into two sections by a turned and carved bulb located approximately three-fifths along the whole pipe case's length. The carving on the lower part of the stem is divided into five longitudinal compartments of scrolling floral decoration; two compartments match their opposites, while the uppermost panel is unique. The floral patterns continue along the upper part of the stem, terminating at the bowl. On either side of the upper-section is a full-length figure standing in profile, holding a scimitar and facing a writhing serpent.

The pipe case is decorated all over its carved-out areas with a faint notched pattern.

Construction:
The case is made from two pieces of walnut: a lid and a main body. On top is a brass hinge plate, nailed with six tacks to the lid and main body, with three tacks used apiece. The part of the case in which the stem of the pipe would have resided would probably have been bored using a heated metal rod.

Condition:
The pipe case shows a slight curvature to the right, as one looks along it toward the bowl.

H. Clifford Smith, in a note on a minute paper (RP 28/9292), 02/11/1928: ‘The collection of pipe-cases is undoubtedly a very interesting one, and every item differs.’ Upon entry to the Museum, the condition of this object was noted as 'good'.

Clay tobacco pipes are fragile, so cases such as this one were used to ensure they would remain intact when carried outside by their owners. Post-1690 a spur on the pipe’s ‘heel’ developed which made them easier to hold as one could do so without the risk of burning one’s fingers. For long pipes, this also meant it could be rested on a table without leaving a burn mark. The hinged lid tended to be favoured after this date as a sliding closure would catch on the spur. 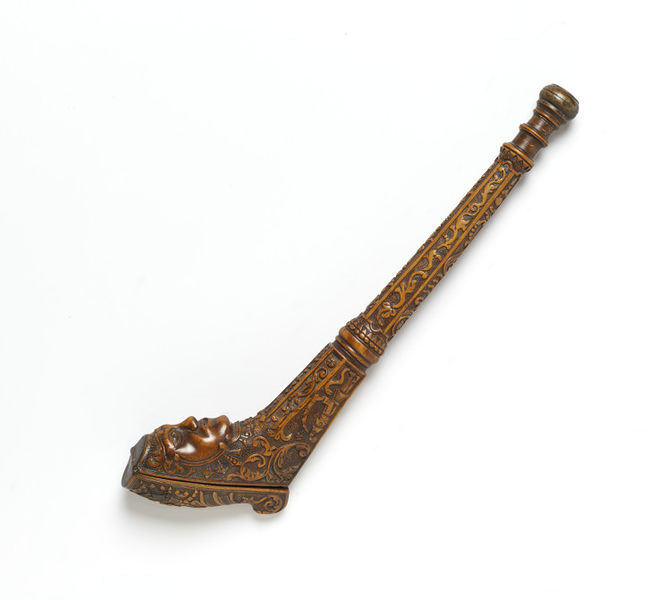