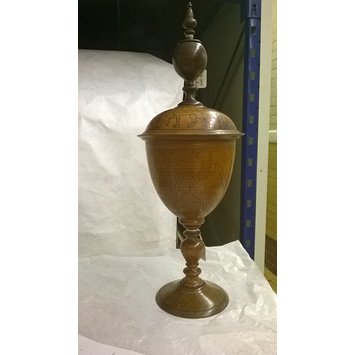 They are surrounded by an inscribed rim.

The oviform cup is divided by hatched columns, below is an inscribed border. The four compartments contain respectively:

'Blessed are those that finde true drinke indeed: they have a Great Delight Gods word to heare his spirit therby their Soules Doth Lively feed assuring them of endles ioy most Deare'

'Being sound regenerate & renewd in Minde, Lyfe they finde'
Around the base of the bowl

'This notable standing cup and cover, offered for sale by Nyberg at £90, was brought to our notice by Mr. H. Clifford Smith, who as you know was working on its kind some years ago.

This important early 17th century family of maple etc., cups, akin to mazer bowls, consists as you know, of more than a dozen recorded pieces engraved ornamentally with heraldic beasts of specific noble families and with pietistic verses and texts. These have long been regarded as Eucharistic, but the use has been uncertain. Investigations in progress suggest that the cups are pietistic, not Eucharistic, and were used as loving-cups (with allusion to divine grace) at Laudian versions of The Banquet (of Marchpane). We have a long description of such Banquet, at a jocular level, with Month trenchers, Zodiac sugar-plate modelling and a "sun-cup"; an inscription on one cup, half-jocular, half-pious; and a cup which is also a trencher-box.

The vendor states that he bought the cup for £60 some twenty years ago. The price asked now is most reasonable, since the higher treen is in the ascendant and several big collectors are in the field.'

The exact use of this type of cup is not clear. It had been thought that they were fashionable communion cups, although the use of wood as a vessel for the host had been forbidden by the Canons of Winchester as early as 1071. Pinto relates that they could have been the cups of Royal Cupbearers, and though some of the crests relate to holders of this office, most had held it before the reign of James I. The likelihood of their having been prototypes for silverware is thrown into doubt by the lack of any known replicas made in silver.

Pinto propose that they may have been 'part of the insignia of some exclusive 17th century society', similar to, or perhaps an ancestor to, the Honorable Order of Little Bedlam, a social club founded by the 5th Earl of Exeter in 1684.

The decoration would most likely have been executed with a hot thin steel implement on a carefully prepared surface, which would have been very smooth and probably glazed first. This would have been difficult to achieve, as heat could not be controlled very carefully, and so the designs may have been first finely gouged or incised and then later darkened. 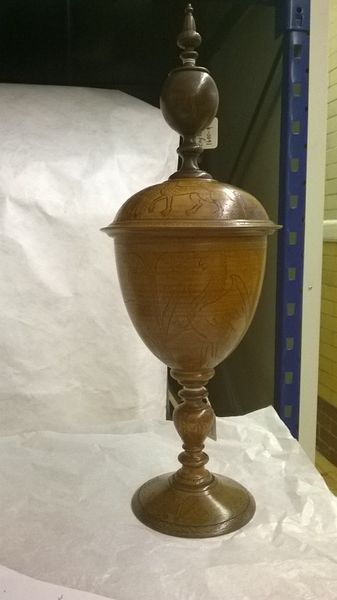