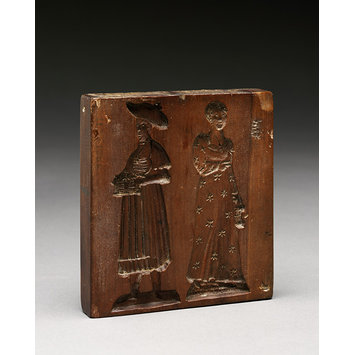 Gingerbread, a biscuit flavoured with ginger and spices, was traditionally sold at street markets and Christmas markets in Germany. It was made by pressing the mixture into wooden moulds before baking or setting. Usually fruitwoods were chosen for moulds as they carved well and did not flavour the biscuits. Gingerbread in the shape of human figures were particularly popular and this mould has two alternatives, a fashionably dressed woman and a street seller in folk dress. On the reverse is a third mould, of a stag and a fir tree. The figure on the right is in a dress of about 1800, probably copied from a fashion plate, but the mould would have been used for many years. This mould was probably made in Bavaria, in southeast Germany.

A rectangular slab of fruitwood, probably pearwood, carved on both sides for use as a culinary mould. One one side are two standing female figures, the right-hand figure in a high-waisted dress in the neoclassical style fashionable from 1795 to about 1820, which was probably copied from a fashion plate. The flower-patterned fabric, long sleeves, low neckline and short hairstyle were all fashionable during this period. She has a pendant around her neck and is holding a bag in one hand. On the left is a second mould, of a female figure in a contrasting style of dress. She appears to be in traditional regional folk dress, with a broad-brimmed hat, a laced bodice, a shawl, and an apron over a below-the-knee skirt. She is holding a basket, possibly containing gingerbread.

On the other side is a traditional northern European motif, of a stag leaping and a pine tree, which is also found on embroidered textiles.

The mould is worn at the edges.

The mould was probably made in Bavaria in about 1800, for making gingerbread. It is possible that it was used commercially. It was acquired in 1906 by the antique dealer Ernest W. Savory, of 4 Rodney Place, Clifton, Bristol. Offering them for sale to the museum, he wrote: 'When in Bavaria a month or two ago I bought .... twenty three carved wood moulds, "lebkuchen pressen", used for making the Nuremberg ginger breads, which I collected from various sources. These are of the 17th or 18th centuries & are most interesting as showing the customs & costumes of the various periods. Some of them are carved on both sides, two or three with some red seal on the backs.' Curator A F Kendrick commented that 'these moulds would form useful additions to our small collection (Nos. 203-1879; 746-1904; 747-1904).' The Museum bought them for £12. (Museum nos. 99 to 121-1906)

The V&A also bought other items for the collection from Mr Savory between 1905 and 1913, including a large collection of German pewter.

Culinary moulds were used to shape cakes and biscuits. This mould was bought in Bavaria, Germany. Moulds were used in many European countries and were often carved with human figures and animals. According to Edward Pinto in his book Treen and other Bygones, early recipes for gingerbread using breadcrumbs did not require baking, the moulded biscuits being simply removed from the mould and left to harden. Wooden moulds were bulky to store, so were often carved on both sides in order to economise on space.

Fruitwood was often used for culinary moulds, as it was free from taste, close grained for accurate carving, free from knots, and not liable to warping.

A carved wood gingerbread mould with two female figures on one side and a leaping stag against a tree on the other, German, 1795-1850.

Gingerbread mould
1795–1850
Germany (probably Bavaria)
Fruitwood, possibly pearwood
Made for three shapes of biscuit: a fashionably dressed woman, a street seller in regional dress, and a stag and tree (reverse)
Museum no. 112-1906 [] 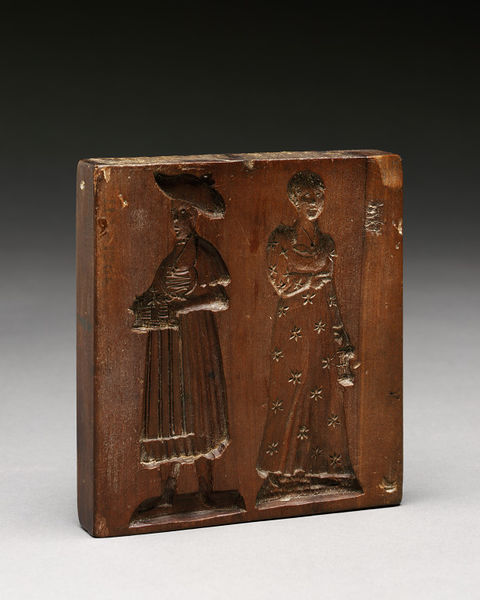