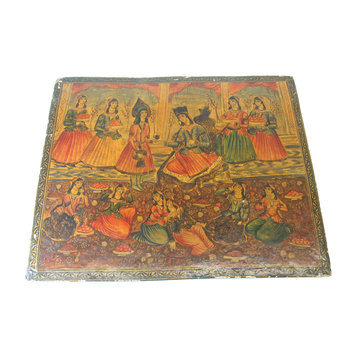 From the fifteenth century onward, lacquer objects – including book bindings, pen cases, mirrors, boxes and Qur’an stands – gained popularity in Iran, peaking in production during the nineteenth century, with the Qajar dynasty (1797-1924). The vast increase in production across a variety of objects resulted in a considerable decline in quality; however, fine specimens continued to be done by certain artists in the cities of Shiraz, Isfahan, and Tehran. Much lacquerware during the Qajar period was also influenced by the increasing import of European artefacts, resulting in a distinctive Europeanization of designs and motifs. Lacquer production continued in Iran until 1924, when the Qajar dynasty was overthrown, after which point its production became determinably unfashionable.

Writing in the early nineteenth century, Sir William Ouseley, a Persian scholar and secretary to his brother, George III’s ambassador to the court of Fath Ali Shah (ruled 1797-1834), Sir Gore Ouseley, wrote: “At Ispahan the covers of the books are ornamented in a style particularly rich; and they often exhibit miniatures painted with considerable neatness and admirably varnished….Most provinces of the kingdome are supplied by this great city with pen-cases or kalamdans, made, like the book-covers, of pasteboard, and sometimes equally beautiful in their decorations….some contain, in various compartments on the lids, ends and sides, very interesting pictures executed in the best style of Persian miniature. The common subjects are battles and hunting-parties; but they often exhibit scenes from popular romances, among which the favourite scene seems to be Nizami’s story, the Loves of Khusrau and Shirin.”

Constructed of papier-mache and sometimes wood, lacquer objects were often decorated with small-scale paintings of popular motifs like floral patterns, birds, royal scenes, and popular romances before a varnish was then applied that protected the painting and added a pleasing reflective glow.
Scenes of courtly life such as this were common during the late Qajar period. The typical scene of the young shah (or prince) engaged in a hunting scene were common images of the court; while similarly, showing the princess surrounded by her female attendants, often accompanied by food and drink – pomegranates represented fecundity and fertility, and were a popular visual motif in scenes that included women – and compliment the image of the male’s virility in hunting. The large scale of these panels indicates that they were probably used as a cover for a large mirror. The opposing sides are only painted in solid red, indicating that they were not highly esteemed examples of lacquered indented to cover a valuable object, as if were the case, then both sides would have been lavishly lacquered.

A pair of lacquered panels, each decorated on one side with a lively scene representing episodes from the Qajar court: one depicting a hunting scene with the shah on horseback piercing a lion through the mouth with his spear, while huntsmen circle around him attacking the lions and gazelle; the other scene shows a courtly woman seated in a throne, flanked by standng women presenting trays of fruit and drink, while below, a row of ladies kneel upon a carpet with one appearing ot have taken faint as she reclines upon another seated lady.

Tim Stanley, “Lacquer in the Islamic World” in The World of Lacquer: 2000 Years of History (Lisbon: Calouste Gulbenkian Foundation, 2001), pp157-187.
William B. Robinson, “Some Thoughts on Qajar Lacquer” in Lacquerwork in Asia and Beyond: Colloquies on Art and Archaeology in Asia No. 11, ed. William Watson. London: Percival David Foundation, 1981, pp. 267-70 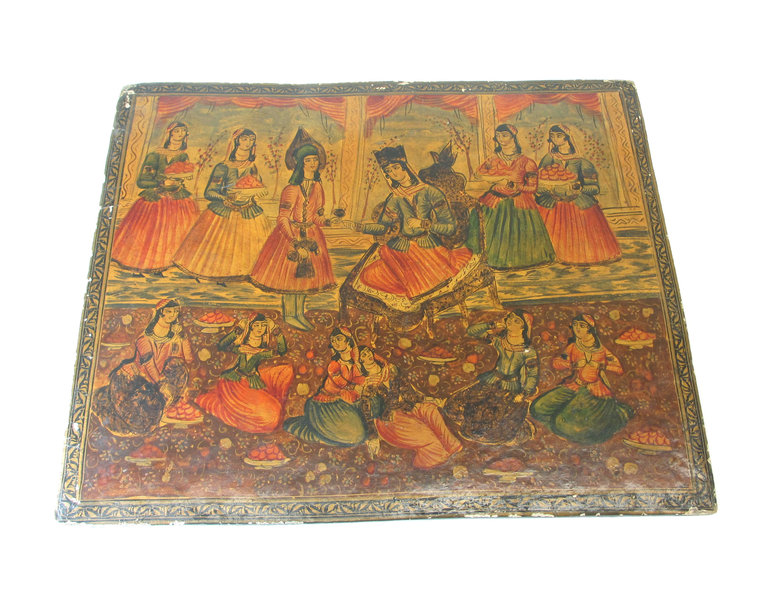