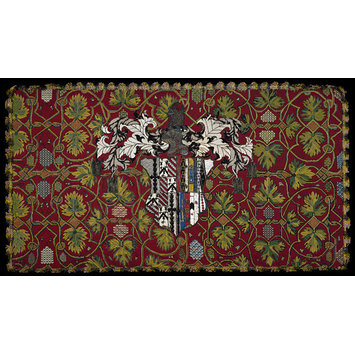 Many long cushion covers, specifically made to size to go on hard wooden benches, survive from the 16th and 17th centuries. This example is said to have been made for the Chapel of the Holy Ghost in Basingstoke, Hampshire: the Sandys family’s private place of worship.

The survival of so many embroideries worked in wool or silk on linen canvas reflects the popularity of such work in the 16th and 17th centuries, when it was used extensively for furnishings. It is likely that many pieces of this type also survived because, unlike richer embroideries with metal thread, those made of less valuable materials were not dismantled.

It was probably made after the marriage of Henry Sandys to Elizabeth, daughter of William, 2nd Lord Windsor. The coat of arms is quartered, which is to say divided, to show the previous generations of both partners in the marriage. It became fashionable in the Tudor period to quarter one’s arms and show every instance of a coat of arms granted, inherited or brought to the family through marriage. These arms, with only two generations shown apiece, are relatively modest by the standards of the day.

Linen canvas embroidered with silk, silver-gilt and silver thread in long-armed cross and tent stitches, with laid and couched work. Trimmed with a short silk fringe.

In the centre, a shield of arms surmounted by a helm and elaborate mantling; the ground is covered by an interlace of scrolling stems enclosing alternately vine leaves and bunches of grapes. The ground is worked in red, the pattern mainly in shades of green and yellow; the arms are worked in black, white, yellow, blue, red and silver.

Crest: a goat's head and neck couped at the shoulders argent, horns and wings elevated or.

The arms (Sandys of the Vyne and quarterings impaling Windsor) are probably those of Henry Sandys, who married Elizabeth, daughter of William, 2nd Lord Windsor, and who died before 1560.

This cushion cover is said to have come from the Chapel of the Holy Ghost at Basingstoke, the private chapel of the Sandys family. The family moved to Mottisfont, near Romsey, Hampshire, after the sale of the Vyne. Mottisfont was subsequently inherited by Sir Charles Mill, Baronet, a descendent of the Sandys, and eventually passed to the donor of this object, Mr. Peter Barker-Mill.

The arms in the centre of this cushion are probably of Henry Sandys (left) with those of his wife, Elizabeth (right), daughter of William, second Lord Windsor. The arms are quartered (divided) to show the arms of previous generations of both families.

Linen canvas embroidered with silk, silver and gilded silver thread, with a silk fringe
Embroidered in England
Possibly made for the Chapel of the Holy Ghost, Basingstoke, the private chapel of the Sandys family 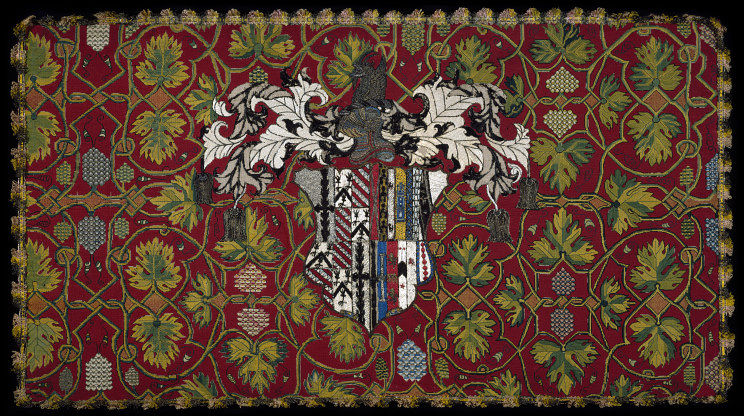