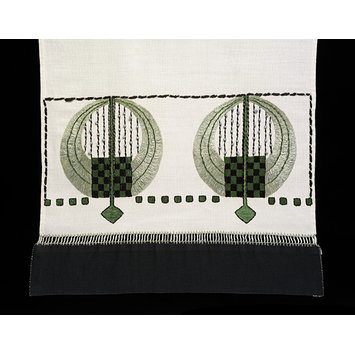 In 1894 an embroidery class open to students and outsiders was started at the Glasgow School of Art by Jessie Newbery (1864-1948), an ex-student and wife of the influential Principal of the School, Francis Newbery. Jessie Newbery's revolutionary teaching emphasised the importance of form and structure over superficial decoration and encouraged simple, speedy techniques. She taught a wide range of students and Saturday morning classes were organised for primary and secondary teachers and professionals.

Jessie Newbery's individual use of coarse fabrics, pastel colours and plain stitching greatly influenced modern embroidery and the teaching of embroidery to children at the time.These ideas were continued in the work of her pupil Ann Macbeth(1875-1945), who began teaching at the school in 1901 and took over the class following Mrs Newbery's retirement in 1908.

Another version of this embroidered sideboard cloth, by 'Miss Runciman' was illustrated in The Studio (Volume 50, Issue 208, July 1910, page 129). The design may have been produced by Ann Macbeth, or another teacher at the school, Margaret Swanson, as a project for students.

Sideboard cloth (previously catalogued as table runner) of embroidered linen. At either end in green, black and turquoise floss silks in stem and satin stitches and couch work in an abstract design similar to a Japanese fan. With ends of black linen below a drawn thread work band.

Great Britain (made)
Helensburgh (made)

This runner was said by the donor to have been embroidered in 1909 by her aunt, Frances Mary Templeton. One of ten children who lived in Helensburgh, the embroiderer's sister married a silk-throwster (this involves the finishing of raw silk to various thicknesses,qualities and strengths) called Anderson. in 1876 he took over a Goven firm which had been in Glasgow since 1824 (it also had factories in Motherwell, Lanarkshire and at Glemsford in Suffolk). Anderson and Thomas Wardle became friends and it was Anderson & Robertson silk which was used by Thomas Wardle for his printed silks. The Museum also has a panel of Leek embroidery by Frances Mary Templeton.

This runner was exhibited at the V&A Exhibition of Victorian and Edwardian Decorative Arts, 1952 (cat.R.34).

Sideboard cloth of embroidered linen, in the style of the Glasgow School of Embroidery, worked by Frances Mary Templeton, Great Britain, 1909

This sideboard cloth shows aspects of the techniques and designs associated with Jessie Newbery and Ann Macbeth, whose embroidery classes at the Glasgow School of Art left an important legacy to the craft of embroidery. They used coarse fabrics and simple, speedy stitching to emphasise the structure of their bold designs. The maker of this cloth attended classes given by Ann Macbeth in Helensburgh, to the west of Glasgow.

Linen ground embroidered with floss silks in stem and satin stitches, with couched and drawn thread work.
Made by Frances Mary Templeton (born in 1867, died in 1946) 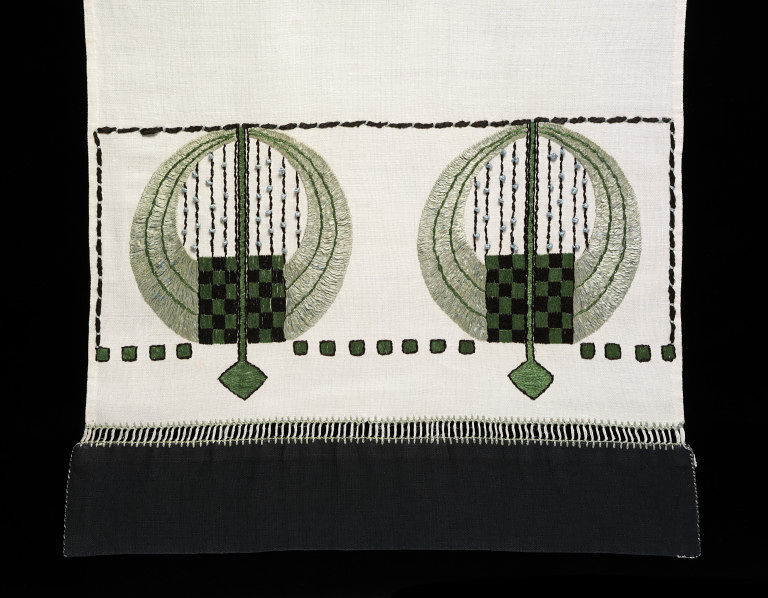