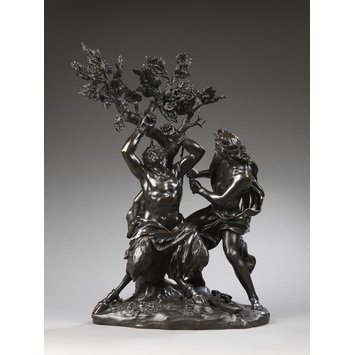 The Flaying of Marsyas

The bronze tells the story from Greek mythology of how the satyr Marsyas, renowned for playing the double flute (or syrinx), and the god Apollo competed in a musical battle between flute and lyre. Whoever won could choose the penalty for the loser. The contest was judged by the Muses, the goddesses of creative inspiration in song, poetry and other arts and the companions of Apollo, so not surprisingly, the god was deemed the winner. He chose to have Marsyas flayed alive. Here Marsyas has been tied to a tree, and Apollo, armed with a knife, is about to make the first cut to remove his skin. Apollo's lyre lies abandoned on the ground, but Marsyas's syrinx is missing from this cast.

An inscription on the base records that this bronze was given by Grand-Duke Cosimo III of Tuscany to the French painter Hyacinthe Rigaud (1649-1743) in 1716, together with its companion group representing Mercury Binding Prometheus (see A.3-1967). The bronzes were received in exchange for a self-portrait that Rigaud sent to form part of the Duke's collection of self-portraits (Uffizi, Florence). Such exchanges were common and considered by both sides as a honour. Cosimo probably ordered versions of existing models from his court sculptor, Giovanni Battista Foggini, and a cast of this subject (now in the Bayerisches Nationalmuseum, Munich) had previously been sent as a gift to Cosimo III's son-in-law, the Elector Johann Wilhelm in Düsseldorf. Two other cast of this group are known, one also in the V&A collection (A.9-1954), given by Dr Hildburgh in 1954, and one in the collection of Peter Marino.

Foggini was born in Florence in 1652 and was later sent to Rome by Cosimo III, where he studied under Ecole Ferrata. On his return, he became the leading Florentine sculptor, bringing with him the exuberant Baroque style that had evolved in Rome. A gifted portrait artist, Foggini was appointed Grand-Ducal Sculptor in 1687, which gave him access to the foundry in the Borgo Pinto used by his predecessors Giambologna and Pietro Tacca. His elaborate bronzes mark the transition from the intimate small Renaissance bronze to larger-scale decorative and theatrical Baroque works. The dramatic movement and flowing drapery are typical of the style, but despite their dynamism, this group and its companion are designed to be seen primarily from the front.

This bronze group consists of the figure of the satyr Marsyas tied to a tree, with the god Apollo at his proper left, armed with a knife to remove his skin. The figures and tree are supported on a base decorated with foliage, and around the back is an inscription stating in French that the group was given by Cosimo III, Grand-Duke of Tuscany to M. Rigaud in 1716. Apollo's lyre lies on the ground; the pipes (or syrinx) that had belonged to Marsyas, which originally hung from the tree at the left, is missing.

The model has been variously attributed, being given to Gianlorenzo Bernini (Christie's catalogues cited below) and to Massimiliano Soldani (see A.9-1954). In the Crozat de Thiers sale catalogue the bronze (together with its pair, Mercury binding Prometheus, A.3-1967) were given to Lespingola, highlighting the stylistic connections between the French sculptor's bronzes and those produced in Italy. By the time it entered the V&A's collections in 1967, it was already identified as the work of Cosimo III de' Medici's Grand-Ducal sculptor, Giovanni Battista Foggini (1652-1725). The Florentine Foggini was sent by Cosimo to train at the newly instituted Accademia Fiorentina (Florentine Academy) in Rome under the sculptor Ercole Ferrata and the painter Ciro Ferri. On his return in 1676, he soon received commissions from the court, and was later appointed both Sculptor and Architect to the Grand-Duke.

This group (and its pendant) are one of the pairings of two- figure allegorical or mythical groups created by the artist in bronze, perhaps inspired by those of his predecessor Ferdinando Tacca. The compositions are designed with a primarily frontal viewpoint. The bronze was given to the French painter Hyacinthe Rigaud by Grand-Duke Cosimo III in 1716 in exchange for a self-portrait by the artist. Its later provenance includes: Louise-Antoine Crozat, Baron de Thiers sale, Paris, 26 Beb - 27 Mar 1772, lot 911; John Edward Taylor sale, Christie's 1-9 July 1912, lot 34; George Durlacher sale, Christie's, 6-7 April, 1938, lot 46; Miriam, Lady Marks; given to the Museum by Lady Marks in 1967.

This group and its companion (A.3-1967) were in the John Edward Taylor Collection and appeared as Lot 34 in the Taylor Sale at Christie's on July 1st, 1912. They were bought by George Durlacher for 1800 guineas, reappearing as lot 46 in the Durlacher Sale at Christie's on 6 April 1938. In both catalogue entries, which are virtually identical, they were described as 'by Bernini, Florentine 17th century'. They were purchased by G. Kerin for £67 4s 0d and subsequently sold to Lady Marks. (This information noted in departmental records as known from a verbal communication from G. Kerin to Terence Hodgkinson.) 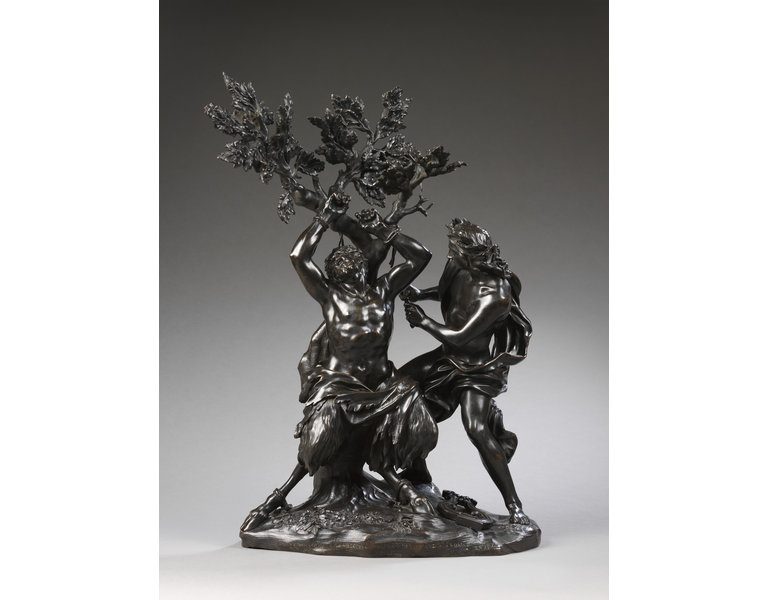