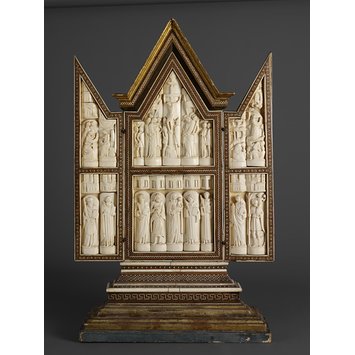 This is a small altar showing in the centre the Crucifixion and the Madonna and Child with Saints. On the left wing is the Annunciation and two saints and on the right, the Agony in the Garden and two saints.

The Embriachi workshop was a north Italian family of entrepreneurs and carvers. The precise location of the workshop is unknown, except that it originated in Florence in around probably the 1370s.
Baldassare Embrichi, a member of a Florentine noble family, and the Florentine literary circles, during his career acted as both merchant and diplomat. He was therefore rather the financial means behind the bone-carving workshop that bears his name, rather than its leading artist. By 1395, political and financial circumstances had forced him to transfer to Venice. The suggested time range of activity for the workshop differs, from the tightest being 1390-1405, to a wider span of 1370s until at least 1416, but certainly no later than 1433.

They employed local workers specialising in 'certosina' (inlay of stained woods, bone and horn), and the workshop produced items carved in bone (usually horse or ox) with wood and bone marquetry.
As well as altarpieces, the workshop also made caskets as bridal gifts to hold jewels or documents, and these were often decorated with scenes from mythology.

The triptych shows the Annunciation, the Crucifixion and the Agony in the Garden on the upper tier. Below, reading from left to right, are single figures of Sts Paul, Anthony Abbot, Bartholomew, John the Baptist, the Virgin and Child, two deacon saints with martyrs' palms, St Mary Magdalene and St Christopher carrying the Christ Child. The two deacon saints are almost certainly Stephen and Lawrence.

Workshop of the Embriachi (sculptor)

Wood inlaid with bone, horn and with gilding, staining and paint 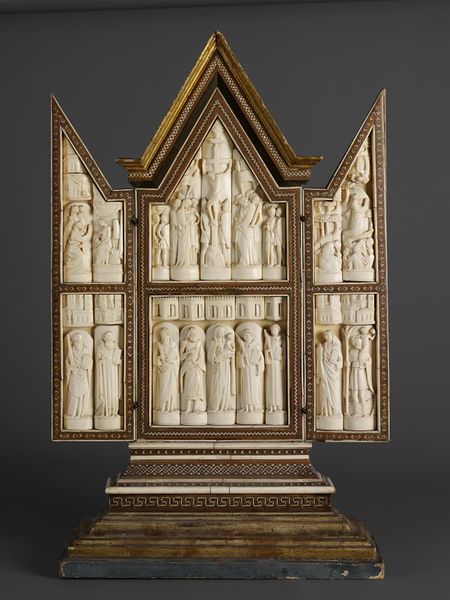