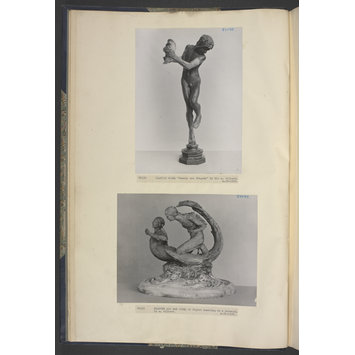 This is a model for a bronze statuette produced by Sir Alfred Gilbert, made ca. 1891-2. A naked youth standing on his right leg is holding a grinning mask in both hands and looks down over his left shoulder.

As with the figure of Perseus (77-1904), in his interview given in the Easter Art Annual, Gilbert related this statue to his personal life, as being ' the climax to my cycle of stories...It represents a boy carrying a comic mask. He is stung by a bee - the symbol of love. He turns, and his face becomes tragic. The symbol is in reality fact. I was stung by that bee typified by my love for my art, a consciousness of its incompleteness, my love was not sufficient...I was living a kind of double life at that time, enjoying the society of Irving and Toole and other famous and pleasant members of the Garrick Club going to the theatre at night, and with Tragedy in my private life, living my Comedy publicly, if not enjoying it'. A one-act play at the Lyceum called Comedy and Tragedy inspired Gilbert, and he furhter states that ' I conceived the notion of harking back to the old Greek stage upon which masks were always worn, and I conceived a kind of stage property boy rushing away in great glee with his comedy mask, and on his way being stung by a bee. This was the only way in which I could present the hidden pain and passion of the boy'.

Sir Alfred Gilbert (1854-1934) was a famous British sculptor of the late 19th century. He was also medallist, goldsmith and draughtsman. He was known for his inventiveness and characteristically used many different materials in the same work. He epitomised the movement known as the “New Sculpture”, with a new focus on naturalistic forms. His many commissions included for example the celebrated figure of Eros, part of the Shaftsbury memorial.

Plaster, model, full size. Comedy and Tragedy. A naked youth standing on his right leg, the left raised; he holds a grinning mask in both hands and looks over his left shoulder to his feet, which was stung by a bee.

According to Gilbert it represents 'A (Greek) stage property boy rushing away in great glee with his comedy mask, and on the way being stung by a bee.' 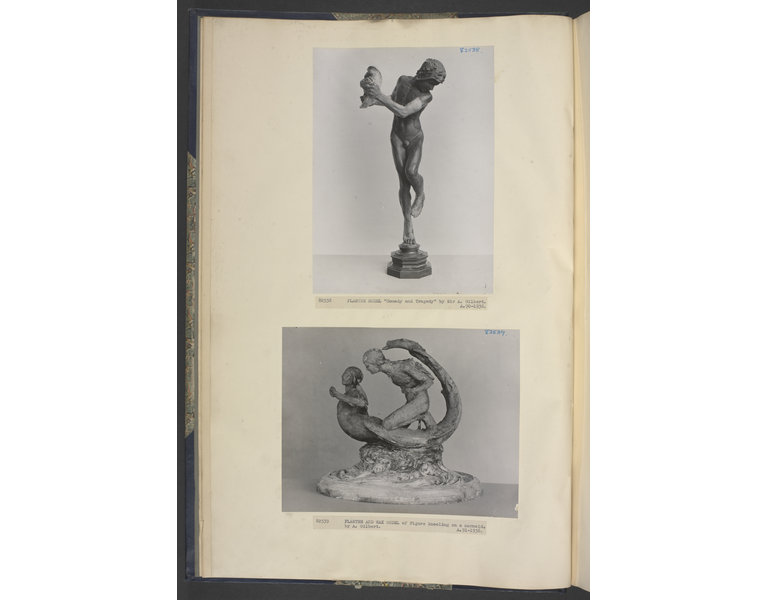