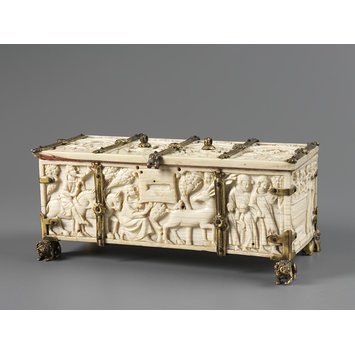 This oblong ivory casket, made in PAris, in about 1330-1350, is decorated with scenes from the New Testament and from the legend of St Eustace. On the lid are four scenes, the Annunciation, the Visitation, the Nativity and the Presentation, each surmounted by a cusped arch. On the lower part of the box are scenes from the life of St Eustace taken from the Golden Legend. On the front, Christ appears to the saint while hunting, the saint is baptised with his familty, their adventure on their flight from Rome and their martyrdom by burning in a brazen bull. The metal corners and the lion's feet are modern but the rest of the gilded copper mounts appear to date from the fourteenth century.

Ivory casket, oblong with metal mounts. On the lid are four scenes, the Annunciation, the Visitation, the Nativity and the Presentation, each surmounted by a cusped arch. On the lower part of the box are scenes from the life of St Eustace taken from the Golden Legend. In the first image, the pagan soldier Eustace is seen riding out to hunt, sounding his horn. In the second image, he kneels in prayer, as the head of Christ appears between the antlers of a stag, which turns back to look at him. The final image on the front shows Eustace leading his family at midnight to be baptized. On the right short side of the casket, the family is baptized by the Bishop of Rome in a single large font. The first scene on the back of the casket duplicates the composition of then last image on the front: Eustace leads his family through the woods, fleeing Rome. The second scene, as on the front, is double-size, and shows the family trying to board a ship. On the left, Eustace pulls at the hair of one of the mariners, as in the second part of the image the boat sails away with Eustace's wife on board, now in the power of the captain, to whom she shows submission by clasping her hands in front of her. In the final scene on the back Eustace loses his two sons while wading through a river to carry them across; a lion and a wolf carry off both children; oddly, the river in which Eustace stands in omitted. In the last scene, the narrative leaps forwards from Eustace's tribulations to his martyrdom. The family has been reunited, but because of their steadfast Christianity they are placed in the brazen bull (looking more like an ass) and burned before the Emperor Hadrian. Above the hand of God appears from the heavens, while below a small figure uses bellows to fan the flames.
The lid is organised differently, as a series of four scenes beneath an arcade of trefoil arches. These concentrate on the Virgin and the Infancy of Christ, depicting the Annunciation, the Visitation, the Nativity and the Presentation in the Temple. 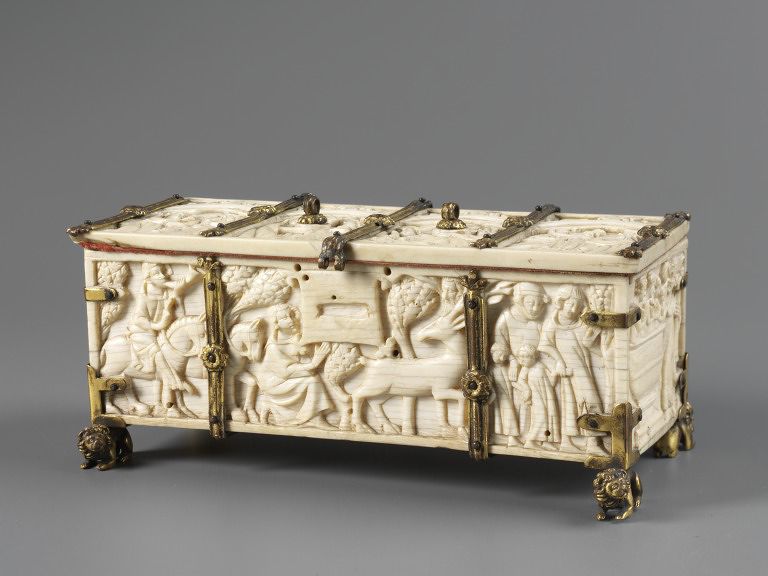