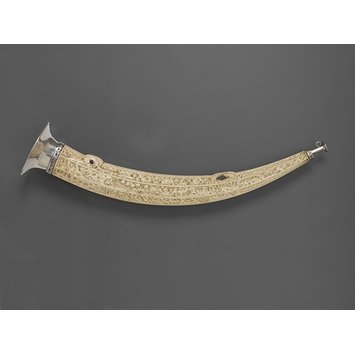 This horn or oliphant of carved ivory is probably made in the early fifteenth century in England. The style and workmanship of this horn are rare, with an ambitious and varied decorative scheme and with an unmatched level of technical accomplishment in such features as the integrally-carved suspension loops and the recurring device of figures emerging from or entering holes in the surface of the ivory. It is significant that the horn is embellished with four crowns, suggesting that it was a royal or aristocratic commission.

Hunting horn decorated with bands of hunting and other subjects among conventional foliage scrolls separated by narrow lines.
The walrus tusk is carved with a series of hunting and other scenes, separated by narrow lines which run longitudinally from one end to the other. There are three bands or divisions on each side, with a further row of dense foliate decoration on the inner and outer curve. The inner (uppermost) curve is divided into three sections by the integrally-carved suspension loops. The first section of foliage, contains four crowns spaced equidistantly on the central stem. The second, issuing from a grotesque mask, is inhabited with long-tailed monsters; and the third, short, section nearest to the bell contains a standing figure of a wild man, reaching up to pluck fruits from a tree. On one side, the uppermost band shows three dragons and a bear crawling through the foliage and confronting one another, while the suspension loop is equidistantly carved with a battle between a dragon and a fantastic quadruped. The middle band starts from the bell end with St Christopher carrying the Christ Child, with the hermit holding a lantern in one hand and a chaplet in the other. To the right are seven men in kettle-hats armed with long spears attacking a dragon, which emerges from its cave with flames billowing from its mouth; the hill behind is pitted with rabbit-filled holes. Two further men, one bald-headed, are shown hunting, with various animals emerging from or entering burrows.; and then a short narrative unfurls towards the narrow end, with three hunters walking through the woods, the first pointing towards their quarry, a wild man and woman embracing amongst the rocks. The third band below starts with a man being led by two ladies towards a rocky landscape filled with holes from which emerge heads and a kissing couple, and beyond, a further couple embracing. To the right are two shepherds with a dog, a flock of sheep and roaming goats. The other side is similarly arranged. The upper band shows five pairs of animals: mating rabbits, a wolf killing a sheep, a fox killing a large bird, a lion and dragon in combat and an eagle killing a swan. The second band shows three hunters and their dogs amongst foliage, chasing after a stag and doe on the right; the man on the left, wearing a cap, holds a long pike while the middle figure, with sword, blows a horn. The third band illustrates the end of the hunt, with the hunters returning with their dogs and one of the men carrying the dead prey suspended from a pole on his shoulder.

Formerly in the Debruge-Duménil collection, Paris (Labarte 1847, cat. no. 154). According to Labarte the horn 'provient du cabinet de M. le compte de Renesse-Breidbach': this was presumably Count Clement-Wenceslas de Renesse-Breidbach (1776-1833), a celebrated collector who had sold the château of Renesse, near Antwerp, in 1830 and whose collection was split between Elderen (near Tongres) and Coblenz. After the Debruge-Duménil sale (12 March 1850, lot 154) it passed into the collection of Prince Petr Soltykoff in Paris and was bought by John Webb, London at the Soltykoff sale in 1861 (No. 377, for £265). 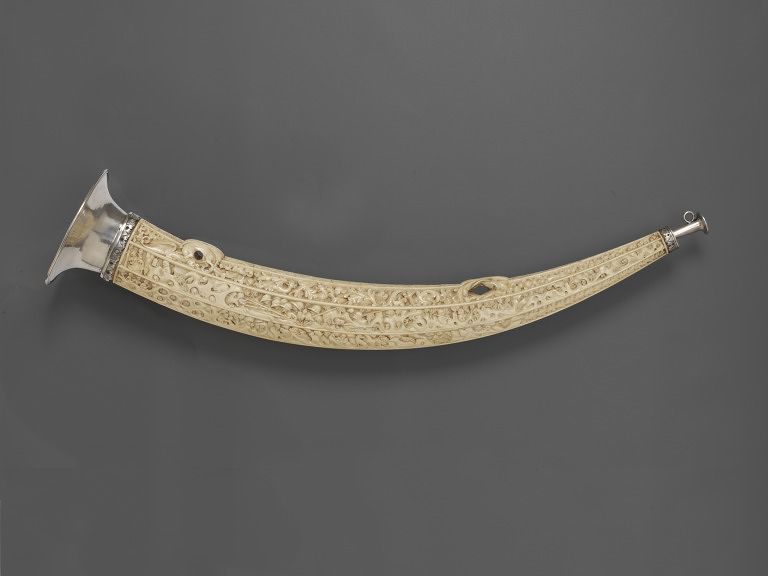