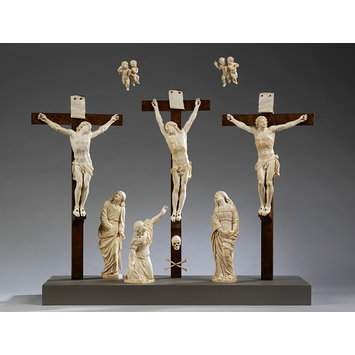 This ivory Crucifixion group is made by Pierre Simon Jaillot in France in 1664. Jaillot (1633-1681) is well known from various documentary sources, largely because of his dispute with Le Brun, Louis XIV's artistic adviser. He was admired above all for his crucifix figures.
This group was probably intended as an altarpiece for a private chapel. It is one of the few documented examples of French invory carving in the 17th century, and is exceptional among baroque ivories in forming a complete ensemble.

Another crucifix by Jaillot was recorded at Ailles in the late 19th century (Cherrier 1899), but is now lost. The present piece is the only signed and dated piece known by him, and is regarded as his most ambitious work. Commentators in the 18th century referred eulogistically to Jaillot’s sculpture, and the anonymous author of Mémoires secrets, published in 1787, noted the sublime character of this Crucifixion group, as well as the Jansenist manner in which Christ’s body was suspended from the cross, his arms almost vertically above his head. It was reproduced in an engraving by Etienne Picart after a painting by Louis Licherie, first published in 1821 (Baker 2011). An unattributed ivory figure of the Good Thief, the only survival from a lost crucifixion group, which is now in the Louvre, is thought to be French and to date from c. 1650. It shows stylistic analogies with the present group.

The group of figures consists of the Crucified Christ on a later walnut cross with an ivory scroll inscribed in Hebrew, Latin and Greek, and ivory skull and crossbones; the Good Thief and the Bad Thief, each with a scroll inscribed; the sorrowing Virgin; St. John the Evangelist; the kneeling figure of Mary Magdalene, and two pairs of angels to be suspended above the group. Signed.

'DYSMAS LATRO'
'Dismas the thief'
on scroll of Good Thief

'GESTAS LATRO'
'Gestas the thief'
on scroll of Bad Thief

The dying Christ is flanked by the Good Thief and the Bad Thief. At his feet are the grieving Virgin, St John the Evangelist and the kneeling figure of Mary Magdalene. The group was probably made for a private chapel.

‘In Jaillot’s crucifixes we find all that we could ask for, for the connoisseur and for the devout person. You could say that if he provides an object of study for one, the other no less finds a subject for meditation.’ [09.12.2015]
CRUCIFIXION
French; signed and dated 1664
Ivory
By Pierre Simon Jaillot
Purchased with the assistance of the National Art Collections Fund

Probably intended as an altarpiece for a private chapel, this group is one of the few documented examples of French ivory carving in the 17th century. Jaillot is best known for his ill-advised and acrimonious dispute with Louis XIV’s artistic advisor, Charles Lebrun. e appears to have worked primarily in ivory but the large scale of the figures in this group the suggests the close connections of his work with French monumental sculpture by artists such as Girardon.
[1993 - 2011] 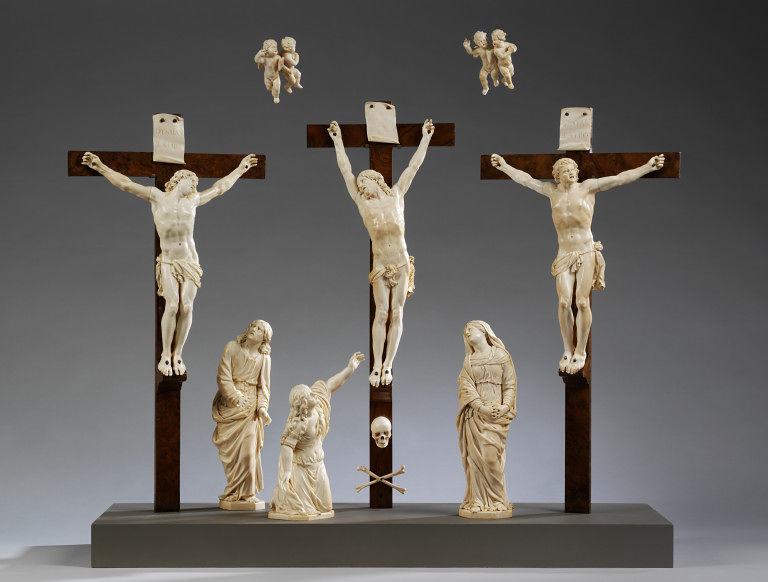