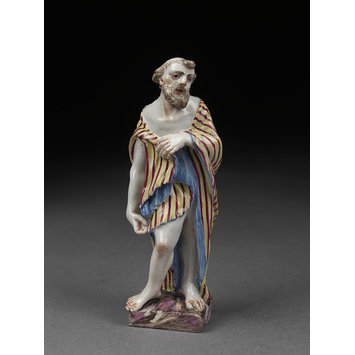 Statuette of a bearded man in hard-paste porcelain painted with enamels. The man is draped in a blue-lined cloak with red and yellow stripes. Square base painted to imitate marble.


45. Figure of the Allegory of Winter
after Girolamo Ticciati
circa 1780-1790
porcelain painted in colours
h 14 cm
under the base in blue “6.”
inv. 377-1902
gift: Col. Waldo-Sibthorp
This figure represents the Allegory of Winter and is probably related to a set representing the four Seasons which is listed in the Inventory of Models (about 1791-1806) of the Doccia factory: “N. 39 The four Season. By Ticciati. They are Spring, Summer, Autumn, and Winter in wax with the mould”; N. 23 at this umber there are the four Seasons by Baldassar […]”; “N. 2 At this number there are the 4 Seasons by Ticciati in the small version. With their moulds”; “N. 3 there are more 4 Seasons by Piamontini. With their moulds (LANKHEIT 1982, p. 130, 30:39; p. 152, 74:23; p. 154, 76:2).This statuette shows stylistic affinities with the works of the Florentine sculptor Girolamo Ticciati, whose presence among the models at Doccia can be justified by the fact that Gaspero Bruschi, head modeler at the factory starting in 1737, was one of his students (LANKHEIT 1982, p. 15). Since a set of the Seasons based on the gilded bronze versions decorating the Badminton Cabinet at the Liechten stein Museum di Vienna (GONZÁLEZ-PALACIOS 1986, p. 419- 391), have been found among the plaster models presently stored at the factory (inv. 768, 1166, 2370, 2371 in black, MORAZZONI, LÉVI 1960, vol. II, plate 247), we can assume that, due to its small size, this statuette belongs to the series defined as “small”. If we compare both versions of the figures representing Winter, it is evident that there are similarities in the way that the brazier is set on a tree trunk, and the position of the figure with the right leg placed forward and the head set to one side. The appearance on the art market of a complete set of the smaller Seasons in Ginori porcelain reveals that they are a reduction of the figures of the Badminton Cabinet. This fact is also confirmed by the relative models in biscuit in the Museo di Doccia (inv. 628, 629, 630, 631 black), even though many parts are missing (inv. 629 black). It is probable that this statuette of Winter is that referred to in the Inventory of Models: “[…] 13 little figures […] the eleventh is Winter” (LANKHEIT 1982, p. 150, 67:1) and is related, as mentioned above, to the creation by Ticciati. A comparison with the plaster model in the collections at Doccia (inv. 185 in pencil) and the versions in porcelain at the Stibbert Museum in Florence (A. d’Agliano, in LE PORCELLANE EUROPEE 2002, p. 27, cat. 20) and at the Museo Gianetti in Saronno (L. Brambilla Bruni, in BRAMBILLA BRUNI, MELEGATI, ZENONE PADULA 2000, p. 98-99, cat. 29) reveal that there was an error in the assembly of the right arm of the figure in the V&A, which suggests that the modeler at Doccia did not have direct knowledge of the composition.
R.B.
Bibliography: MORAZZONI 1935, plate LXXVIII 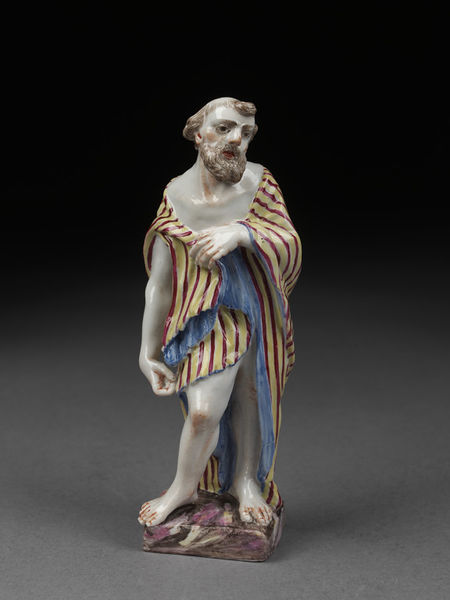