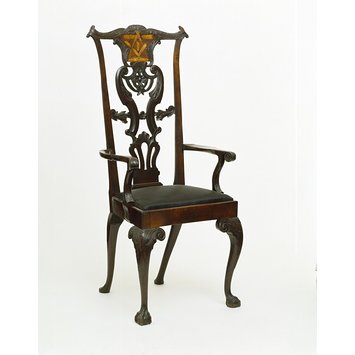 A Freemasons' Lodge or meeting house is provided with a number of pieces of furniture that are used in the course of ceremonies. The best-known pieces of furniture are generally the trio of chairs used by the Master and the two Wardens. These are generally larger than ordinary chairs, requiring a footstool for the Master at least. In their general form they follow that of fashionable chair design, but they include carved or inlaid emblems of some of the tools that have symbolic meaning for Masons, such as the set square and the plumb line. This chair is ornamented with the set square and dividers, symbols usually reserved for the Master. The three chairs of a set do no sit together in a lodge, as they are often portrayed in photographs. The chair of the Master sits at the east end of the main room of the Lodge, with that of the Senior Warden at the west end, and that of the Junior Warden in the middle of the south side. This group of chairs was given by the South Middlesex Lodge but was apparently made for an earlier lodge, which was later absorbed by the Royal Alpha Lodge, the personal lodge of Prince Augustus Frederick, Duke of Sussex (1773-1843). The papers of the original lodge do not survive so we cannot know who made the chairs.

Master's armchair of walnut (?) or mahogany, with carved decoration and inlaid with light wood (possibly maple), from a Masonic Lodge. The chair is oversized and much taller than a standard chair. It has a tall back with a wide central splat, loosely based on a vase form but composed of a shortened splat with three spreading vertical piercings, surmounted by a pair of symmetrical S-scrolls, supporting a basket shaped top element. It is carved and pierced with scrolls, rosettes, and acanthus and is joined at the centre to the side uprights by leaf ornament.
It is inlaid near the top of the splat in light-coloured wood (maple?) with a folded ruler, a set square and plumb level, which are overlaid with a pair of carved compasses, pendant from the top rail, which is serpentine in form with outset corners, of the type illustrated in Chippendale's Director (1754), and is carved with acanthus. . The arms, on concave supports set back from the front legs, are carved with acanthus on the front of the supports and the had rests, which scroll under. The rail to the trapezoidal seat is plain, enclosing a separate, drop-in seat panel, upholstered in black horsehair. The front legs are cabriole, carved on the knees with acanthus and terminating in claw and ball feet. The back legs are raked and neatly shaped, but without carving.

Condition
The chair has suffered from movements in the wood. The back left (PR) leg has split at some time and been repaired. Behind the central carving on the back, the chair has been reinforced with a wrought iron plate. In the upper part of the splat there are missing sections of carved foliage that link the ornament. There are two breaks to the top rail. The surface has been covered with a very dark varnish, which make visual identification of the wood difficult. The seat upholstery has been renewed and shows a jut base cloth with 2 inch (5 cm)wide webbing woven in herringbone weave in black and white, each width with two red warp threads.

Presented by the South Middlesex Masonic Lodge, 132 Hurlingham Road, London SW6. This Master's chair, and two wardens' chairs (W.218 to 219 -1923) had been on loan to the Museum since 1915 (Nominal File Ma/1/S2626, RF 23/7249). They were thought at that time to date from about 1730, that being the date of the foundation of the Lodge no. 76, which met at the White Bear, King Street, Golden Square, London, but in terms of style it is more likely that the chairs were made after 1760. The lodge was re-named the Well-Disposed Lodge in 1771 and in 1779 it moved to Waltham Abbey, Hertfordshire, where it met at the The Cock inn, and it is even possible that the chairs date from that period, as chairs for such ceremonial uses tended to use rather conservative designs, as they do today.

A letter from Mr John Hamill, Librarian and Curator at Freemason's Hall, dated 5 July 1988, to Claire Graham, author of Ceremonial and Commemorative Chairs in Great Britain (1994), gives the history of the 'Royal Alpha Lodge No. 16', the Grand Master's Personal Lodge:
'It was an amalgamation of five lodges, one of them being Lodge No. 76, at the White Bear, King Street, Golden Square, which was founded in 1730. From 1735 to 1778 the lodge met at various taverns in the City and Southwark. In 1771 it took the name 'Well Disposed Lodge'. From 1778 to 1814 it met at the Cock, Waltham Abbey, Essex, but was dormant from 1805. In 1814 the Grand Master, HRH Augustus Frederick, Duke of Sussex, wished to have a personal lodge and 'took over' the dormant Well Disposed Lodge, transferring it to his appartments at Kensington Palace and changing its name to 'Alpha Lodge' [it appears to have become 'Royal Alpha Lodge in 1824, on the occasion of its amalgamation with the 'Royal Lodge No. 210]. The whereabouts of the Lodge's Minutes and records pre-1818 is not known. Nor can I establish a source for the statement that your chairs were the property of this lodge in the 1730s.
The earliest record of the chairs comes in the Minutes of the South Middlesex Lodge No. 858 for 25 February 1886 when the Master of that lodge was thanked "for his kindness in having the lodge chairs so beautifully repaired". A note stated that the chairs had been acquired when the lodge was constituted in 1861 but did not state where they had come from. Unfortunately the records of Lodge 858 were also a casualty of the blitz. The chairs were used by Lodge 858 until 1908 when they removed to Frascati Restaurant in New Oxford Street, which had a properly furnished Masonic Suite. From 1908-1915 the chairs were stored at the house of the Lodge Secretary. In February 1915 he reported that they had been loaned to the Victoria and Albert Museum. On 25 October 1925 th Lodge resolved to offer the chairs to the V&A as a gift to the nation. It was written up in the Daily Telegraph for 22 Novembers 1923 (copy enclosed [this now in departmental files]).'

As the Royal Alpha Lodge No. 16 continues to exist, itt is not clear why or how these chairs passed to the South Middlesex Lodge but an undated memo, probably from the 1960s, reported that a member of the Lodge, Mrs C.H. Matthews, believed that the chairs had come to the lodge 'in the early 60's of the last century'.

When they were first acquired the chairs were shown in Gallery 57.

A photo of what appears to be a copy of the chair, from the French & Co. archive at the Metropolitan Museum, New York, has been annotated '1924' by John Hardy, Research Assistant at the V&A in 1971 and carries the stock number '7635'. It seems likely that this was made as a copy of a recent acquisition.

A report on the upholstery of the chairs was made by Mary Tinker in August 1989 and a copy is in departmental files. This states that the original top cover would have been of red worsted wool.

This is the Master's chair from a Masonic Lodge. The Master presided from this chair which would traditionally have been set at the east end of the main room in a Lodge, with smaller, similarly decorated chairs for the Senior Warden (as W.219-1923), set at the west end, and for the Junior Warden (as W.220-1923), set at the south side. The three positions represented the rising and setting of the sun and the noonday, and appropriate motifs are often shown on the appropriate chairs (the rising and full sun, and a crescent moon), although not in this case. This represented the Master's task in opening the meeting and the Senior Warden's task in bringing it to a close. Each office holder was associated with a particular order from classical architecture (the Ionic for the Master, the Doric for the Senior Warden, and the Corinthian for the Junior Warden) but again these are not seen on these chairs. Similarly the three chairs often show particularly motifs in carving or inlay: the compasses or the set square for the Master, the spirit level for the Senior Warden and the plumb rule for the Junior Warden. On this chair, several motifs have been combined. Lodges did vary in their practice. The feet of such chairs were often in the form of lion's paws for the Master and eagle's claws clasping the globe for the Senior and Junior Warden (what we now call 'claw and ball'), but on this Master's chair, the feet are of this latter form.

Master's chair, of large scale, the back with serpentine top-rail, in Chippendale style, with a central splat composed of Masonic emblems, including dividers, a plumb level and a set square; in walnut (?) and a light wood, the front legs cabriole, on ball and claw feet, with drop-in seat.

Graham, Clare, Ceremonial and Commemmorative Chairs in Great Britain. London: Victoria and Albert Museum, 1994, pp. 113-4, fig. 135.
'Masonic Chairs', an article in the Daily Telegraph, Thursday 22 November 1923 illustrates the chairs at the time they were acquired by the Museum.

This chair, from the South Middlesex Lodge of Freemasons, would have been used as a ceremonial chair by the Master of the Lodge. The chairs on either side in the photograph were for the Senior and Junior Wardens; all three chairs are in the style of the mid-18th century, with vase-shaped backs and 'ear-pieces' on the angles. Freemasonry, a society for me with a charitable basis, uses ritual dramas which follow ancient forms and use the symbolism of the stonemason's customs and tools; some of the symbols are inlaid into the back.

Given by the South Middlesex Lodge of Freemasons
Museum No. W.218-1923 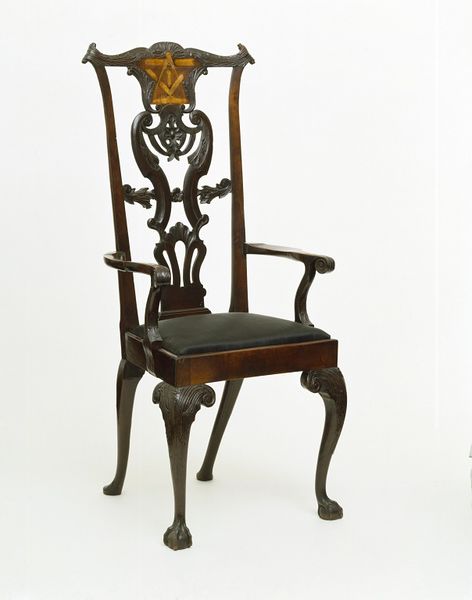