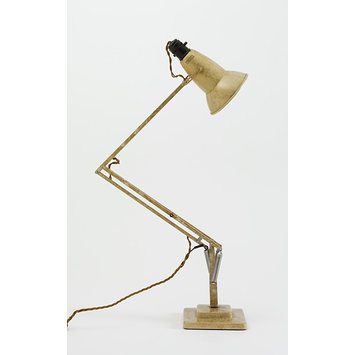 George Carwardine patented the spring design used in the Anglepoise lamp whilst working as a freelance car designer. He rapidly saw that it could be used for a range of applications, particularly a task lamp which could be moved to the desired angle and would hold its position.

The first 'Anglepoise' had a black finish, but the company also introduced special finishes, like this example, to widen its appeal for the domestic market.

Anglepoise lamp, sitting a square stepped base with a cast iron block inserted to give the lamp stability, supporting a U shaped bracket to which three supporting arms, square in cross section, two directly by steel pins the third to the rear by a chromium plated bracket, all three anchored to the bracket by steel springs. The front two arms are spaced apart by three chromium plated steel rods. At the other end, these three arms are connected to a fourth arm by steel axles which in turn supports a C shaped strip which holds a conical shade with a wide flared rim and a plain moulded edge. The shade has pierced rows of circular holes near the top for ventilation. The torpedo switch mechanism is housed in a Bakelite sleeve surmounting the shade. The twisted flex is wrapped in cotton thread and is inserted through two of the arms. The light bulb which is entirely contained within the shade is attached to the Bakelite switch mechanism by a bayonet fitting.

Metal with a distressed cream and gold paint finish, cast iron block inserted in the base and chromium plated details, Bakelite switch mechanism.


George Carwardine (1887-1947), a car designer, had set up his own business, Cardine Accessories working on automobile suspension systems and moderators. He initially worked for Hortsmans until they finally ceased trading in 1929.

After this, George turned his mind to other things working in a studio in his back garden. He had become fascinated with the concept of spring based mechanisms allowing weighted objects to be moved freely into any position where they remain balanced. In 1932 he filed a patent that is clearly identifiable as the first Anglepoise lamp using 4 springs. George went into small scale production; and naturally he used springs supplied by Terry’s.

However he soon realised he needed to find a partner. His patent became effective in January 1934 and within a month he had signed an agreement giving Terry’s exclusive rights; and they started to manufacture the lamp in return for a royalty. The royalty was 4 shillings a lamp. The new product was launched at the British Industries Fair in Birmingham in February 1934.

Terry’s were unable to register Equipoise as a name, so they adopted the word Anglepoise. Terry’s had a numbering system where every new product was given a consecutive number. This lamp had two: 1208 was a short arm version with 12 inch arms and the1209 had 18inch arms – the same dimensions as George’s prototype. The 1209 proved the more popular. The management of Terry’s felt that the existing Anglepoise 4 spring design was too industrial and they had their eyes on the domestic market. George went back to the drawing board and working with the designers at Terry’s they came up with the 3 spring version, known in the Terry’s numbering system as the 1227. George applied for a patent 433,617 in 1934, and manufacture commenced in 1935. The sales of this new design quickly overtook the 4 spring original.

Anglepoise lamp 1227, designed by George Carwardine and made by Herbert Terry & Sons, Redditch, 1938. Metal with a distressed cream and gold paint finish.

George Carwardine patented the spring design used in the Anglepoise lamp while working as a freelance car designer. He soon saw that it could be used as a task lamp which could be moved to the desired angle and would hold its position. Anglepoise lamps normally had a black finish, but special finishes, like this one, was introduced to widen its appeal for the domestic market. 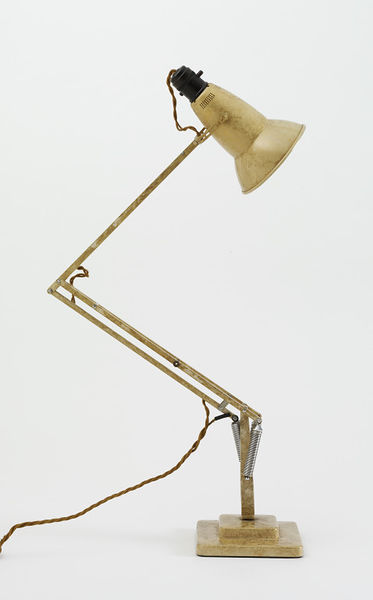