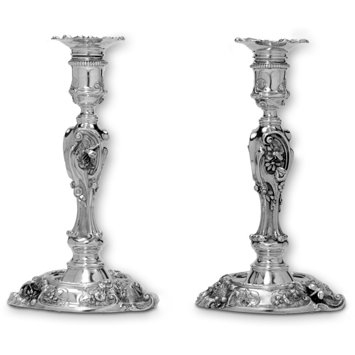 One of a set of four George II silver candlesticks made for Peter and Clara Le Heup and incorporating the bee hive and bees which feature on the Le Heup coat of arms, supplied by Paul de Lamerie, London 1744-5.

A silver candlestick (one of a set of four) on a baluster stem cast with scrollwork enclosing three leaf vignettes, a bee at the entrance to the hive, a bee on a flower-spray and a dragonfly on the head of a flower, the domed bases with swirling scrollwork rims with shells at intervals, the shells headed by sprays of flowers, one enclosing a beehive, one applied with a bee above a flower spray, one with a butterfly on a flower, the bases with two versions of lowers, guilloche innger borders, the campana sconces decorated with rococo shells, the detachable nozzles with matching rims of scrolls issuing flowers, leaves and shells, marked on outside rims of bases. The swirling Rococo form is based on designs by Meissonnier, with a soft triangular foot with cast and chased flowers, insects and swirls.

Historical significance: These candlesticks are a rare example of a common domestic accessory made to order for a client incorporating decorative motifs of personal significance. Although they do not have many of the distinctive design features used by Paul de Lamerie's leading craftsman who worked in the fashionable Rococo style - he was known as the Maynard Master - they show the dynamic twisting volumes and the integration of abstract and naturalistic motifs that he had introduced. Other modellers in de Lamerie’s shop quickly adopted the vocabulary of the Maynard Master.

The design of these candlesticks is inspired by the work of Juste Aurele Meissonnier, Dessinateur du Cabinet du roi, as published by Huquier in Livre de Chandeliers de Sculpture en Argent, 1728, figures 73 to 75. Meissonier showed all three sides of the design making the goldsmith's task more straightforward. A pair of candelabra made in France to Meissonnier's design were in the English collection of the Duke of Kingston by the late 1730s. A pair of ormolu candlesticks at Woburn Abbey inspired by Meissonnier's designs date from the 1740s and a carved wooden model of the same design, perhaps used as a tool for casting, is in a private English collection. De Lamerie copied this design in 1742-1743 - a pair of candelabra are now in the Untermeyer Collection at the Metropolitan Museum of Art. The design was also copied by the London goldsmith Thomas Gilpin 1744-1746. 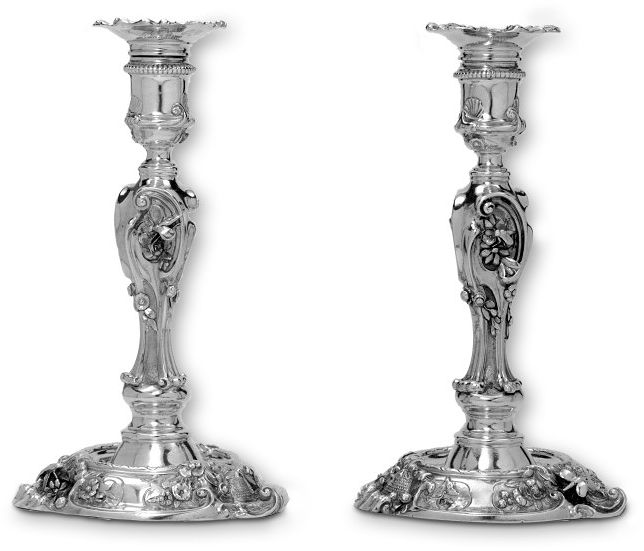